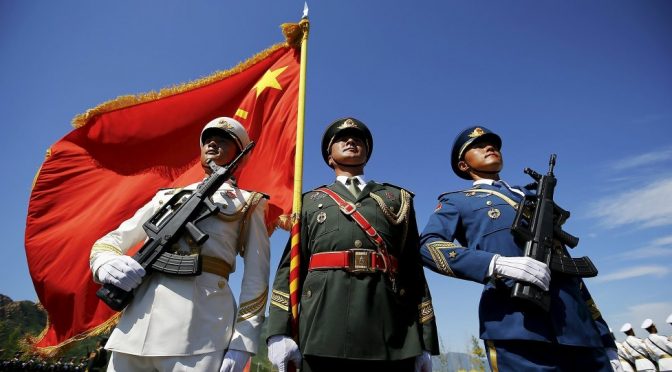 CIMSEC is an all-volunteer, 501(c)3 nonprofit that relies on its readers to continue. Consider making a donation here today.

Last week CIMSEC published articles analyzing China’s evolving defense and foreign policy, including sea power’s role in China’s strategic ambitions and related lessons from history, maritime strategy for the Indian Ocean, counterterrorism cooperation with the U.S., and major pronouncements on military modernization made by Xi Jinping at the 19th Party Congress. We thank our authors for their excellent contributions, listed below.

“Since the beginning of the 21st century the People’s Liberation Army Navy (PLAN) has steadily developed into a blue-water force able to rely on an ever increasing amount of modern equipment and platforms. This has been the result of years of intense effort on the part of naval planners in support of a more-forward oriented Chinese foreign and security policy.”

Chinese Maritime Strategy for the Indian Ocean by David Scott

“In expanding naval operations from the South China Sea and Western Pacific into the Indian Ocean, China is pursuing a “two-ocean” (战略, liang ge haiyang) strategy. This is the manifestation of China’s new strategy of “far-seas operations” (远海作战, yuanhai zuozhan) endorsed since the mid-2000s, to be achieved through deployment and berthing facilities across the Indo-Pacific, in part to meet energy security imperatives and thereby achieve “far seas protection” (远海护卫, yuanhai huwei) and power projection by the Chinese Navy.”

“But it’s not only about statements, the building of a mighty naval force and the emergence of China as a first-class maritime power can be identified as a fundamental indication of her attempts to implement such ambitions. A mighty naval force (a blue water navy) that can provide homeland security, ensure sovereign rights, contest national claims, and secure Chinese interests worldwide (including safeguarding the interests of her allies) constitutes a necessary condition for a world leader.”

China’s Base in Djibouti: Lessons from Germany’s Asian Colonialism by Pawel Behrendt

“The opening of the Chinese military base in Djibouti on August 1st is a landmark event; China finally has its first overseas military outpost. The parallel of similar activities undertaken by the Germans in China at the turn of the 19th and 20th centuries is noteworthy for offering lessons on the relationship between force structure, maritime strategy, and overseas basing.”

“It is past time to recognize that CT cooperation is a remote possibility for the United States and China. Such a realization does not undermine the prospects of cooperation in other areas, nor ignore the threats violent extremists pose to China and its citizens. Discussions of CT simply exist too near the orbit of complex issues in the bilateral relationship that neither party is willing to jettison.”

“Frankly speaking, no particular new idea related to the defense policy was disclosed by Xi in this report except two deadlines of force building. However, it is still important for political observers and military analysts to read the above contents for understanding the direction and goals of Chinese military policy.”