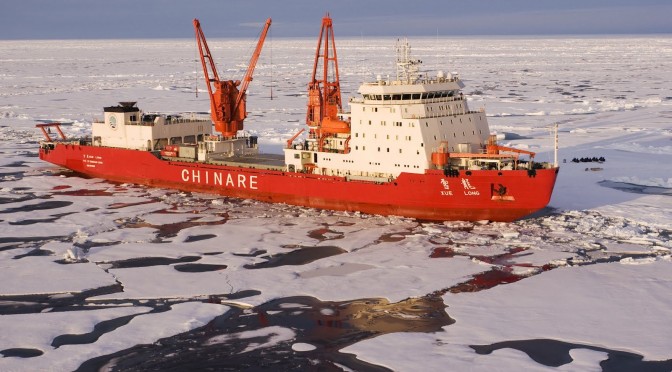 The following article was originally featured by the Conference for Defense Associations Institute. It is republished with permission, and may be read in its original form here.

China’s increasing Arctic engagements overall have been welcomed by the region’s stakeholders. There are, however, arguments in the media and some academic quarters that China’s growing involvement threatens to destabilize the region. Beijing, despite the absence of Arctic territory, is unilaterally asserting itself into the regional institutional architecture, challenging the pre-​eminent role of the Arctic states and their sovereign rights, while their ‘Arctic envy’ to secure regional shipping lanes and resources currently is manifested through political and economic manoeuvring. In the future China may become more forceful in these endeavours, including possible military deployments in the North.

Much of these commentaries are imprecise and speculating at best, largely ignoring the pathways and processes China’s Arctic endeavours have evolved. Lack of specifics on how and why China constitutes a threat to the region, also, demonstrate these arguments derive from the more generalized (yet still problematic) ‘Assertive China’ narratives which have become dominate in Western analyses of Chinese foreign policy. Clearly, China is actively trying to alter the power dynamics in its immediate environment of East Asia. But it is premature to talk of a revisionist challenge to the international system writ large guiding the entirety of Beijing’s foreign engagements. Before assigning China’s Arctic activities to an underlying revisionist agenda, therefore, it is important to further analyze the lines of engagement Beijing is actually pursuing.

China does not have an official Arctic Policy due to the low importance of the region within their broader foreign policy strategy, which is focused on immediate access to resources. The Arctic, though, is an area of long-​term interest motivating Chinese leaders to begin a ‘nascent stage of formulation’ in terms of constructing a regional strategy. Chinese academia, media and the military, also, have become more vocal and engaged in this process.

China’s Arctic engagements originate from and are still dominated by scientific research projects, specifically pertaining to climatic and regional weather phenomenon. These endeavours have increased significantly over the past decade including the 2004 establishment of the Yellow River Station in Spitsbergen, Norway; the creation of the China-​Nordic Research Center in Shanghai in 2013; and the construction of an Aurora Station in Iceland. China, as well, is looking to establish an Arctic research centre in Canada and is building a second scientific icebreaker in conjunction with Finland. Some commentators are quick to dismiss Beijing’s scientific endeavours as camouflaging other more malign political goals, but one should not dismiss the fact that China faces massive environmental and climate change challenges, which motivates much of their scientific and climate work internationally.

Bilateral economic relations is the second line of China’s Arctic engagements. Central Asia, the Middle East, and Africa remain Beijing prioritized regions for resource acquisition but the Arctic states, particularly the Nordic countries, have developed robust resource development projects with China. The strongest of these relationships is with Iceland, where China signed a Free Trade Agreement in 2013 and was awarded its first exploration license in the region for oil in the Dreki area. Chinese companies, as well, have invested billions into mineral-​rich Greenland, a protectorate of Denmark. These relations, however, have not been entirely unproblematic. Iceland’s parliament blocked a land-​purchase deal of a Chinese developer due to concerns over what the land would be used for and investments in Greenland have caused local anxieties over Chinese dominance in the economy, including the possible (but overhyped) importation of thousands of Chinese workers. China has also made inroads into the Canadian and particularly Russian energy markets, the latter following the post-​Crimea sanctions régime that left Moscow short of capital and partners for Arctic resource development. But Ottawa and Moscow, more so than the Nordic states, are wary of the consequences of Chinese economic activities in the North. China’s ability and willingness, however, to invest significantly in these remote areas (particularly Greenland), requiring possibly decades of development before profitable returns are generated, motivates many Arctic stakeholders to engage Chinese companies despite concerns about their government ties and overall environmental and labour standards.

China, finally, has been energetic in gaining entry into the Arctic governance structure and acceptance as a legitimate and non-​threatening stakeholder. After two failed attempts, in 2013 China (along with a host of other Asian countries) were accepted by the Arctic Council, the pre-​eminent regional organization, as Permanent Observers. Despite having no voting rights, Permanent Observers are allowed to take part in seminar discussions and participate in the organization’s working groups. One of the major conditions China (and other applicants) had to meet was acceptance of the Nuuk Criteria which includes acknowledging the pre-​eminent role and responsibility of Arctic states in regional affairs; their sovereignty and sovereign rights; and recognizing the United Nations Convention on the Law of the Sea as the legal régime governing the Arctic. This measure alleviated concerns associated with a more active China by showing their willingness to abide by the rules and conditions of the regional régime.

Chinese leaders, nevertheless, do assert that the Arctic possess certain trans-​regional characteristics which necessitate the involvement of non-​Arctic states (a position held by a number of other Asian states) and as a ‘Near Arctic State’ has a legitimate role to play. Despite some frictions, including over issues of extended maritime zoning claims by the Arctic coastal states which China sees a possibly marginalizing non-​Arctic states access to the North, Beijing has decided to become part of the regional structure and not attempt to create parallel organizations and mechanisms to pursue its interests.

Contrary to portrayals of China as an assertive and bellicose outsider, Beijing’s actions have been conducted through legal and accepted channels, including participating at a low and non-​intrusive level in the regional political architecture. Acknowledging the differences between Beijing and some Arctic actors over issues of maritime rights and the role of non-​Arctic states in regional governance, there is very little evidence of China becoming more aggressive in these pursuits. The Arctic, furthermore, is a stable region characterized by an ever evolving rule-​bound régime populated by developed states, including the world’s two nuclear superpowers, and the absence of war and failed states: conditions which heavily influence the pathways and processes China is and will pursue their interests in the future.

China’s interests in the Arctic, furthermore, align with their broader foreign policy goals of diversifying energy and resources suppliers, securing trade routes and becoming more active in global and regional governance instruments commensurate with their growing great power status and role. Speculations of China’s ‘aggressive’ posturing in the Arctic, however, will undoubtedly continue to inaccurately colour any discussion of the rising power’s actions in the Arctic; far more than any other Non-​Arctic, and particularly Asian, state involved in the region.

Adam P. MacDonald is an independent academic whose work focuses on Canadian foreign policy in Asia, Chinese naval developments, and the ongoing political transition in Myanmar. He can be reached at adampmacdonald@gmail.com. (Image courtesy: alexshakun​.blogspot​.com.)