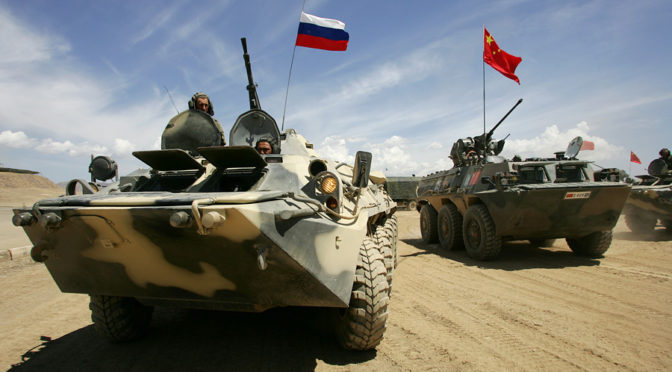 The following is adapted from a new report by the Center for Strategic and Budgetary Assessments (CSBA), Seizing on Weakness: Allied Strategy for Competing With China’s Globalizing Military.

China’s military is going global. Beijing possesses the largest navy in the world and is fielding an expeditionary fleet at a rapid pace. It established a permanent base in Djibouti in 2017 and is reportedly prospecting for more locations, from the South Pacific to the east coast of Africa, that could provide logistical support to China’s forward-deployed forces. In the coming decade, the People’s Liberation Army (PLA) could be well-positioned to influence events and conduct a wide range of missions, including limited warfighting, far beyond the Western Pacific.

As the PLA goes global, Chinese leaders will need to meet multiplying demands on their attention and resources. They will have to work hard to defend their core interests in offshore areas, keep the peace along its interior, and maintain a durable overseas presence. Beijing’s omnidirectional and increasingly global security burdens will require adroit statesmanship to avoid overextension, a classic blunder that has humbled past great powers.

Imperial overreach is not as farfetched as one might assume, despite China’s impressive wealth creation over past decades. As a classic land-sea power, which faces the seas and shares contiguous borders with its neighbors, Beijing must always stay alert to threats in the continental and maritime domains. This inescapable two-front challenge imposes perpetual opportunity costs: every yuan spent on one area is one fewer yuan available for the other flank and vice versa. The trade-offs between its landward and seaward commitments could impose built-in limits on China’s global plans.

The idea that China’s dual orientation could complicate, if not derail, its ascent is not new, not least to Chinese strategists themselves. They took up the debate two decades ago when two scholars assessed the “composite land-sea power (陆海复合型国家)” concept and its implications for China’s future.1 Since then, analysts have wrestled with China’s dual-domain dilemma. The internal debates offer fascinating insights into how Beijing likely assesses its geostrategic obstacles. This discourse could regain salience as China opens a new global front to fulfill its ambitions as a world power.

The main lesson is that land-sea powers must obey geography’s limits. Past great powers that violated those constraints brought misfortune on themselves. At a minimum, land-sea powers must field armies and navies strong enough to defend both their terrestrial and maritime interests. According to two scholars, such powers “cannot neglect either sea power or land power. Both fists must strong.”2 By implication, land-sea powers must devote adequate resources against liabilities in the continental and maritime directions and they perpetually run the risk of diluting their energies across the two domains.

At the same time, dominance in the maritime and continental directions simultaneously is rarely sustainable over the long term. Land-sea powers must abide by the principle of strategic concentration, favoring one orientation over the other. But they must be careful not to blindly pursue sea power or land power while neglecting the other domain. To one scholar, Imperial Germany’s “excessive worship” of naval power unmoored it from its continental interests and spelled disaster for its long-term ambitions.3

Land-sea powers face the gravest danger when they are squeezed concurrently between hostile rivals on the landward and seaward flanks. Indeed, two-front wars have invariably spelled doom for past great powers. Mao Zedong’s “dual adversary” diplomatic strategy in the 1960s that pitted China against the United States and the Soviet Union has taught his successors the potential existential risks of picking two fights at the same time.

For land-sea powers, prudent statesmanship is invaluable. Leaders must strike a delicate balance between their multi-directional commitments and their scarce resources. To complicate matters further, resources dedicated to maritime affairs are frequently inapplicable to continental matters and vice versa. Sound judgments about risk, trade-offs, and so forth are therefore essential to success.

No Longer a Dilemma for China?

For the past three decades, the dilemmas of a land-sea power have not been acute for China. Since the Cold War’s end, China has inhabited a congenial security environment, arguably unprecedented in its modern history. As one scholar claims, Beijing’s surroundings have been “the most favorable since New China’s founding, if not in its entire history.”4 Sustained amity with Russia and an uneasy peace with India have opened new strategic vistas to China. The absence of significant liabilities along its land borders have enabled China to invest in maritime and aerospace capabilities on a massive scale, transforming the PLA into a formidable force.5

Nevertheless, Chinese commentators have expressed misgivings that China’s rising maritime power might still trigger countervailing geopolitical responses. Some worry that China’s rapid ascent at sea could stimulate resistance by the United States, the leading naval power, and by China’s neighbors on land and at sea. Such “dual pressure (双重压力)” could undo China’s rise, just as similar counteractions have spoiled the ambitions of past land-sea powers.6

To avoid triggering such countervailing responses, some scholars urge Chinese leaders to develop “limited sea power (有限海权)” to reassure the United States and China’s neighbors that Beijing harbors no hegemonic ambitions.7 Another argues that constructing a Chinese navy meant to maintain good order at sea might telegraph China’s benign intent.8

Still others believe that China’s best hedge against a dual-front challenge is to maintain good ties with Russia, by far the most powerful actor bordering China. According to this logic, Beijing can withstand pressure in the maritime direction if its relations with Moscow are on a steady footing.9 One analyst contends that Xi Jinping’s global initiatives to court partners, such as the ambitious Belt and Road Initiative, could “reduce balancing pressures by maritime and continental great powers.”10

Despite the varying prescriptions—some of which have clearly been overtaken by events—these writings share an overriding imperative to avert counterbalancing coalitions that balked past land-sea powers.

The Return of Geographic Constraints?

For years, the opportunity costs of going to sea have been low, if not negligible. Put another way, Beijing has not yet had to pay significant penalties for turning decisively in the maritime direction. But convivial geostrategic conditions could well be reversed. China’s recent skirmishes with India along the Himalayan border, for example, show how territorial disputes could stoke great power animosities in unexpected ways. Indeed, sustained Sino-Indian border tensions could metastasize into a more intense rivalry, drawing Beijing’s attention to its southern flank. The standoff could serve as a test case for determining how well Beijing can manage landward liabilities even as it extends its reach at sea.

To the north, several factors could complicate Sino-Russian relations, despite the strategic partnership between the two powers, including close military cooperation. The end of the Intermediate-Range Nuclear Forces Treaty in 2019 freed Moscow to deploy ground-based theater-range conventional missiles. If Russia were to field such weaponry in numbers and in ways that threatened China, Beijing could respond forcefully to a more complex geometry of conventional missile competition in the continental direction, diverting resources from the maritime front. China’s quests for access to the Arctic and for influence in Central Asia, especially through the Belt and Road Initiative, could also introduce friction in Sino-Russian ties.

Other contingencies, such as the resumption of conflict on the Korean Peninsula, could draw Beijing into a major military conflagration and suck China into protracted, manpower-intensive postwar duties, including occupation and other stability operations. A security vacuum caused by political upheaval in a neighboring Central, South, or Southeast Asian country, could similarly pull China into a prolonged and costly landward commitment.

Implications for the United States and Its Allies

As China goes global and as its relationship with the West enters a more rivalrous phase, Washington and allied capitals should consider how they can leverage Beijing’s predicament. However, for the moment, the allies are constrained in their collective capacity to steer China’s relationships with its great continental neighbors, Russia and India, in directions that favor them. Geostrategic logic suggests that Sino-Russian enmity, akin to that of the Cold War rupture, would be a nightmare scenario for Beijing. But the current configuration of international politics indicates that efforts to drive a wedge between Beijing and Moscow would likely prove fruitless. Similarly, New Delhi’s tradition of independence and non-alignment have repeatedly dashed some Western hopes that India could be persuaded to counterbalance China’s ascent more overtly.

Given that the close allies possess limited agency for now, they may have to settle for opportunism to exploit China’s geostrategic dilemma. They should watch closely for developments that could complicate Sino-Russian and Sino-Indian ties. China could well cooperate in allied plans and stumble into confrontation with its giant neighbors. In such scenarios, the allies would need to assess the opportunity costs of China’s landward commitments and the extent to which such additional fronts might lead to overextension. If signs of overreach were evident, then the allies would do well to apply even more pressure in the maritime domain—near and far from the mainland—to attenuate Chinese power. By doubling down on the maritime flank, the allies would force the PRC to compete more vigorously on both fronts while denying it relief in the seaward direction.

A theme that runs through the Chinese discourse is a clear-eyed sense of the limits on China’s geostrategic choices. Chinese strategists who possess a tragic sensibility about great power politics understand that favorable circumstances are never permanent. They recognize that Beijing must strive to cultivate conditions conducive to its outward orientation and that hostile great powers, especially if they were to coalesce against China, could undo its global plans. As the PLA goes global, it behooves allied policymakers to adopt a similarly tragic worldview and revisit age-old geostrategic dilemmas that will likely prove as nettlesome to China as they have for past aspiring land-sea powers.

Toshi Yoshihara is a senior fellow at the Center for Strategic and Budgetary Assessments (CSBA). He is co-author, with Jack Bianchi, of Seizing on Weakness: Allied Strategy for Competing with China’s Globalizing Military, a CSBA report from which this article is drawn.

3. 刘中民 [Liu Zhongmin], “关于海权与大国崛起问题的若干思考 [Some Thoughts on the Problems of Seapower and the Rise of Great Powers],” 世界经济与政治 [World Economics and Politics], no. 12, 2007, pp. 10-11 and 刘中民 [Liu Zhongmin], “中国海洋强国建设的海权战略选择—海权与大国兴衰的经验及其启示 [Seapower Strategy Choices for the Development of China’s Maritime Great Power—The Experiences and Lessons of Seapower and the Rise and Fall of Great Powers],” 太平洋学报 [Pacific Journal], no. 8, 2013, p. 78. See also 古天姣 [Gu Tianjiao], “我国建设海洋强国的困境分析及战略选择 [An Analysis of the Dilemmas of Our Nation’s Development into a Maritime Power and Our Strategic Choices],” 行政与法律 [Public Administration and Law], no. 9, 2014, p. 77.

Featured Image: Russian and Chinese forces operating in a combined exercise in Spring 2018. (Photo via Russian Ministry of Defense)