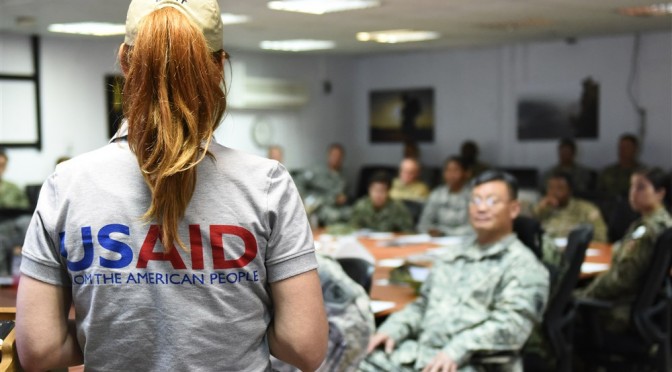 We researched a variety of crisis response events, looking at articles and after action reports for:

Our research of these events revealed that similar challenges arose when different organizations tried to work together in the wake of a crisis, even when the circumstances and locations of the disaster response events varied greatly. Additionally, these events (in retrospect) all had a large maritime component to the response, but the challenges and themes were not unique to maritime HA/DR.

The need for a willing partner. During disaster response efforts in the Philippines, Myanmar, and Pakistan, the governments displayed varying amounts of willingness to allow international organizations to assist in the response. The hesitance and ambiguity of these governments resulted in delays or outright rejection of support from organizations that were eager to provide it.

The importance of people, relationships, and experience. The literature we examined frequently mentioned that pre-existing relationships increased the speed of the response during time-critical phases. Familiarity with the region or with organizational procedures (particularly within the international community) appeared to enable faster or smoother efforts.

The importance of clear roles and responsibilities, and division of labor. In a number of the events we examined, organizations were not familiar with what other organizations could do as part of the response. In some cases, the uncertainty of the situation also made it unclear what organizations should do.

Uncoordinated organizations naturally diverge, and parallel efforts emerge over time. Several of the cases we examined highlighted that, as response efforts wear on, there is a tendency for organizational priorities and activities to diverge and for parallel or contradictory efforts to arise—unless those organizations have established means of communicating and coordinating. Examples of ways organizations did this included: co-location, exchange of liaison officers, exchange of means of communication (e.g., radios), and establishment of coordination “clusters” or regular meetings of topical stakeholders.

Crisis response efforts tend to be ad hoc by their very nature. A lack of standards, SOPs, and communications complicates crisis response efforts, but is likely to be the case more often than not. Our examination of the literature on these cases illustrates that different organizations tend to have different ways of thinking about and approaching problems. For example, we observed several examples where standards for assessments of response effectiveness varied across organizations, resulting in either duplication of effort or disagreement over solutions. Meanwhile, the challenges of physically communicating and sharing information among different organizations occurred in nearly every case we examined. Further, we observed in the literature a standard template of proposed solutions to these types of problems, which implies that either no one is reading or acting on the “lessons” identified in the literature, or that crisis events are so unpredictable and varied in their nature as to render response efforts—at least in the earliest stages—fundamentally ad hoc.

From the perspective of an organization involved in an HA/DR effort, one of these challenges – the need for a willing partner – is beyond the control of that organization. But organizations have more control over the remaining challenges, some of which occur during the response efforts (the importance of communicating and coordinating; not overwhelming or sidestepping another organization; understanding roles and responsibilities), and some of which should be worked out long before the response efforts begin (relationships and experience; standards and SOPs). In particular, organizations can work together to address that latter group of challenges when no crisis is occurring, because it will be too late when the crisis occurs.

David Broyles, Ph.D. is a senior research scientist at CNA, a nonprofit research and analysis organization located in Arlington, VA. The views expressed here are his own.