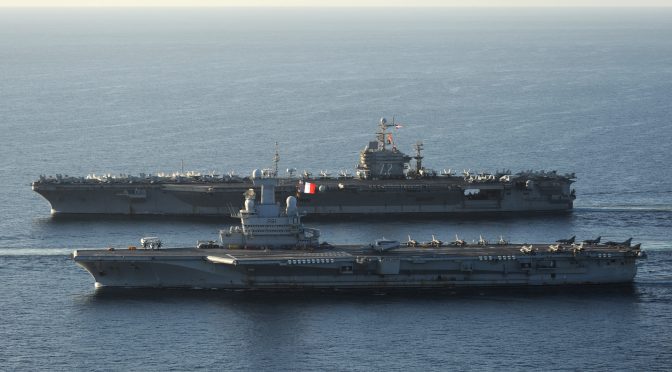 The Carrier Strike Group (CSG), with its air wing, surface escorts, and auxiliary support vessels, provides capabilities with great flexibility and presents an overt symbol of modern naval power. From sea control to strike to humanitarian assistance, it can respond anywhere in the 71 percent of the world which is covered by oceans, and with staying power.

The Mediterranean has been one of the most strategically significant bodies of water throughout all of history. The Persians, Greeks, Carthaginians, Romans, and all of the European nations that amassed great fortunes using it as a trade route from the Middle Ages through the modern era have understood this. Even in very recent history, states have projected naval power from the Mediterranean into Iraq, Libya, and Syria.

The Persians, Greeks, Carthaginians, Romans, and all of the European nations that amassed great fortunes using it as a trade route from the Middle Ages through the modern era have understood this. Even in very recent history, states have projected naval power from the Mediterranean into Iraq, Libya, and Syria.

Russia has remained well aware of the strategic significance of the Mediterranean through its history. As it has been attempting to do for over 300 years, the modern Russian Federation established a permanent naval presence in the Mediterranean. Vladimir Putin’s ally, the Syrian President Bashar al-Assad, has allowed Russia to maintain a navy base in Tartus, which includes replenishment and repair facilities.

Russia’s primary means of projecting naval power into the Mediterranean is the Black Sea Fleet. For this fleet to reach the Mediterranean, it must pass through the strategic straits of the Bosphorus and Dardanelles, which are under the control of Turkey, a NATO member.

After the Mediterranean was safely in western hands, NATO was able to withdraw forces from it. With the Black Sea Fleet essentially trapped behind the Turkish Straits, a great NATO naval force was not necessary to counter Russian influence within the Mediterranean. The U.S. Sixth Fleet became a shell of what it once was and the U.S. abandoned the Mediterranean as a strategic naval hub altogether. With the establishment of a permanent naval presence in the eastern Mediterranean, Russia has made a strategic move and this warrants a counter-move by NATO.

NATO naval presence within the Mediterranean is made up of Standing NATO Maritime Group 2 (SNMG2), formerly known as Standing Naval Force Mediterranean (STANAVFORMED). This is an integrated force made up of vessels from allied nations which is available for tasking from Allied Maritime Command (MARCOM). Its tasking mostly consists of exercises, strategic port calls, and occasional disaster response. The size and makeup of SNMG2 varies depending on what is provided by contributing nations, but it is normally comprised of 4-8 destroyers, frigates, corvettes, or even small fast-attack craft, and one support vessel. This force is a far cry from the sea control, power projection, and disaster response capabilities inherently present in a CSG.

In the October 2015 policy study “Sharpening the Spear” from the Hudson Institute, the authors conclude that for the United States to maintain a naval hub in the Mediterranean, in addition to the current hubs in the
Middle East and Western Pacific, they would need 16 aircraft carriers. That would require six additional carriers to complement the current ten. Where could these additional carriers come from? The United States’ allies in Europe with navies that boast aircraft carriers and have similar reservations about Russian proclivities in the region offer a viable and cost-effective option. This is starting to sound like NATO.

For simplicity, we will assume that based on the Hudson Institute policy study referenced above, given that NATO has 16 aircraft carriers between them, a constant CSG presence can be maintained in the Mediterranean while the United States maintains the other two naval hubs.

The United States currently has 10 aircraft carriers in service, Italy has two, and France and Spain both have one. That puts the total count for NATO at 14, two short of the required 16. However, the U.S. carrier Ford is scheduled to be commissioned in April 2017 and likely to enter service in 2020, while the UK carrier Queen Elizabeth is scheduled to be commissioned in May 2017 and is likely to also enter service in 2020. So, nominally, in about three years, NATO could have continuous CSG coverage within the Mediterranean.

NATO can coordinate a requirement for certain ships to be in a surge-ready status. Over the next three years, this surging of CSGs could be periodically performed to demonstrate the ability of NATO to surge naval power in a crisis. This would be useful as a stopgap measure while additional aircraft carriers are being built, but this would not constitute a continuous presence. Virtual presence is actual absence.

However, demonstrated surges of naval force can still have influence. Demonstrating the ability to surge a CSG, especially a multinational CSG, can send a powerful message to an adversary. Luckily, surging an aircraft carrier from Toulon, Taranto, or even Portsmouth, UK to the Mediterranean is much more reasonable than surging one from Norfolk, Virginia.

The majority of the above discussion has revolved around the aircraft carrier, and though it is a centerpiece, it is not the only component to a CSG. Not only should NATO members coordinate the deployment of their CSGs to provide continuous coverage of the Mediterranean, but should also shoulder the integration of surface combatants into combined NATO CSGs. This can enable even more flexibility and burden sharing.

In 2016, FS Forbin was attached to the USS Harry S. Truman CSG, and then USS Ross was attached to the Charles de Gaulle CSG. Both CSGs were conducting operations into Syria from the eastern Mediterranean. These are perfect examples of burden sharing and are a testament to the present day relevance of the NATO alliance.

NATO is predominately a defensive alliance, but this level of naval cooperation constitutes defense through conventional deterrence by showing that for any move the Russian Federation may make in the Mediterranean, NATO has a counter-move ready.

LT Jason H. Chuma is a U.S. Navy submarine officer. He is a graduate of the Citadel, holds a master’s degree from Old Dominion University, and has completed the Intermediate Command and Staff Course from the U.S. Naval War College. He can be followed on Twitter @Jason_Chuma. The opinions and views expressed in this post are his alone and are presented in his personal capacity. They do not necessarily represent the views of U.S. Department of Defense or the U.S. Navy.

Featured Image: The USS Lincoln and Charles De Gaulle steam alongside one and other in the Arabian Gulf. U.S. Navy Photo. Source.