Nothing has been as over-hyped since August 2011 as China’s aircraft carrier program.  After the former Soviet carrier Varyag, fully refurbished by the Chinese and renamed Liaoning, took its first “test drive”, thousands of blog posts, press pieces, and scholarly articles argued about possible regional and global implications.  Is this single ship a regional or even global threat?  What about the balance in the East and South China Seas?

Stay calm, people.  After a few tests, China’s Navy – the People’s Liberation Army Navy (PLAN) – has shown it is in fact still years away from having an operational aircraft carrier, let alone integrated carrier strike group.

Moreover, if a navy wants to have a single operationally available aircraft carrier at any one time, it needs at least two, and better still three carriers in rotation: the one in operational status, one in the shipyard, and one in training and work-ups.  According to these numbers, it is unlikely that the PLAN will be able to sustain a “blue water” carrier presence before 2020 based on projected shipbuilding schedules.

Even the first flights of a J-15 Shark from Liaoning’s deck were more PR event than step towards a credible carrier force.  It’s one thing to launch a single fighter under controlled and planned conditions.  Conducting dozens of flight movements per hour in wartime requires a significant increase in capabilities and training.  To reach this, China must still walk a long road.

However, while most observers were busy with Liaoning, Asia’s only operational aircraft carrier, India’s INS Viraat, has largely been left out of the discussion (sorry, Thailand, but your never-operating carrier is not a serious asset).  The first reason why India’s carrier must be taken more seriously than China: operational experience.  India has been operating its current carrier since 1987 (the now-decommissioned INS Vikrant began service in 1961), and already has in place the necessary supply chains and logistics that the PLAN lacks.  China’s maritime “Long March” could take longer than Mao’s to gain all the experience India already has.  And while both China and India could turn to Russia for potential assistance, only the latter would likely receive carrier support – whether logistics or training – from the U.S., France, or the U.K.

Unlike their Chinese counterparts, Indian commanders already conduct serious exercises with their helicopter and fighter pilots integrated with their carrier crews.  China, due to the lack of capacity (i.e. a carrier at sea) has not yet started the most crucial parts of its carrier training.  Russian experts warn it may take the Chinese another decade to learn how to “efficiently” run carrier operations.  Meanwhile, India’s next carrier INS Vikramaditya (former Soviet Admiral Gorshkov), due the benefits of Russian support, is already training in Arctic waters and is expected despite delays to enter service in late 2013 or 2014.  The indigenously built INS Vikrant is slated to be commissioned in 2015.  In consequence, whenever the PLAN’s first carrier is operational, India will have at least two well-trained counterparts (Viraat is set to decommission in 2020).  Furthermore, India will generally be able to maintain one operational carrier off-shore while China, at least initially, will not.

Beside Russian support – generous, but not free – India participates in joint exercises with the navies of the other two “Carrier Big Boys,” the U.S. and France.  The PLAN is far from such trials and, beyond search and rescue (SAR), these navies by policy will not conduct full-scale combat training with a Chinese carrier, their possible future foe.

For instance, in April 2012, the U.S. and India conducted the 15th joint naval Exercise Malabar; which also included warships from Australia, Japan, and Singapore.  Training with the U.S. means that India has the opportunity to look at and, thereby, learn from the skills of the world’s best carrier-operating navy.  However, Indians pilots have not yet been reported taking off from U.S. carriers.  Also unprecedented but not improbable, India’s carrier officers, pilots, and crews could hone their skills training side-by-side with the world’s best counterparts.  This is something Chinese sailors are probably never going to experience.  China’s fighter pilots had to travel to Brazil for portions of their carrier flight training.

Moreover, the U.S. is joined by France in using their carriers as political means of improving strategic ties with India.  In 2011 the French Navy sent its carrier Charles de Gaulle, accompanied by surface vessels and a nuclear sub, to India for a joint exercise.  Of course, this was also an advertisement for the French carrier-capable Rafale fighter, which India has since purchased.  Operating combat-proven (Libya), NATO-interoperable fighters from carriers is surely a positive.  Meanwhile, the competition is mostly working with slight improvements on copied Soviet and Russian designs.  While China is developing a flat-top capable stealth fighter (the J-31), it will take years before it reaches full operational capabilities and production.  In response to the threat of a Chinese carrier with J-31s, India could opt for the F-35C or a carrier-capable version of the Russian T-50 PAK FA.  The U.S. and Russia would probably sell everything to New Delhi to keep a resurgent India in their camp.

Given all these advantages there can be no doubt that India’s already operating carriers deserve much higher esteem than China’s refurbished test-object in Dalian shipyard. However, it’s time to put the carriers into the geo-strategic context. 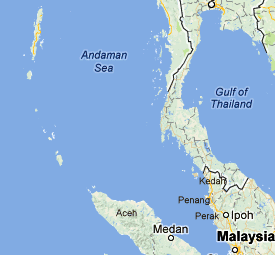 For all its current carrier edge over China, India will not become a U.S.-like carrier superpower; but nor does it need to.  Look at the Indian Ocean on the map and you’ll see the world’s most important sea-lanes running in front of the Indian military’s ports and air bases.  Some of the most critical geostrategic hotspots and maritime chokepoints, including the Strait of Hormuz, the Malacca Strait, and the Gulf of Aden are nearby.  For example, from its Andaman and Nikobar bases, India could easily block the northern entry of the Malacca Strait in the event of conflict.

By comparison, the PLAN has natural access only to the Malacca Strait, and to reach it must traverse the South China Sea, which can easily be filled with the subs and vessels of neighboring nations’ and the U.S. Navy.  Thus, due to geography, the PLAN would have a far more difficult time exerting control on, or re-opening, access to the chokepoint than the Indian Navy.  The Indian Navy would have a good deal easier job of accessing the South China Sea than the PLAN the Indian Ocean.  Additionally, India has no “island chains” from which opposing forces can launch strikes, and therefore does not need to concentrate on Anti-Access/Area-Denial (A2/AD) and instead can focus on freedom of action. 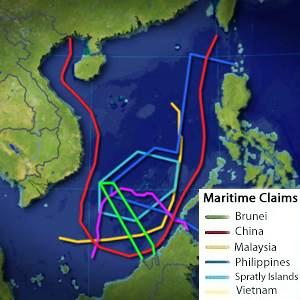 Finally, in the Indo-Pacific Maritime Great Game – how I like to describe what is going to happen in the map at top over the next 50 years – the better cards are in India’s hand.

As mentioned, India has the geographic edge.  New Delhi’s maritime lifelines cannot easily be blocked.  And, if someone tried, India’s carriers, surface vessels, subs, and air bases are within striking distance of the chokepoints.  Furthermore, India has the better demography, with a younger (average) population base than China’s, which is “getting older before it gets rich.”  This is important, because the Achilles Heel of the PLAN’s carrier program is the development of the Chinese population.  Changes in society and government could reverse Beijing’s decisions in the carrier case.  In 2060, India is expected to be the third or second largest economy in the world.  Hence, it will have the money and the technology to sustain its number of carriers at an even higher rate than present.

With this in mind, whoever worries in the U.S. or Europe about these Chinese carriers, which could patrol the Indian Ocean’s SLOCs, should remember that India will be there too.  So will other countries, like Australia.  It’s time to recognize that of the two Indo-Pacific neighbors only one can as yet legitimately claim to be a global maritime power.

Besides, it won’t all come down to naval power in the Indo-Pacific Maritime Great Game.  Of course, as the U.S. military recognizes, it must incorporate Air-Sea, but Space and Cyber must play integral roles too.  Remember, all ships and fighters are worth nothing without satellite communications and a working cyber infrastructure.  Therefore, wordy though it is, an Air-Sea-Space-Cyber-Battle is the way ahead (or perhaps Air-Sea+?); perhaps not only for the U.S., but for those developing their influence in the Indo-Pacific too.

8 thoughts on “Carriers of the Indo-Pacific Maritime Great Game”