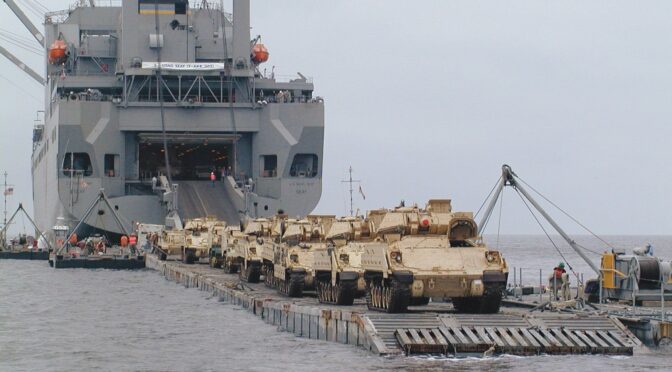 United States Transportation Command (USTRANSCOM) is a unified, functional combatant command of the Department of Defense (DOD), providing support to the ten other U.S. combatant commands, the military services, defense agencies, and other government organizations. The command conducts globally integrated mobility operations, leads the broader Joint Deployment and Distribution Enterprise, and provides enabling capabilities in order to project and sustain the Joint Force in support of national objectives.

In contingencies, the command is dependent on sealift to deliver surge forces around the world. With 85 percent of DOD forces based in the continental United States, nearly 90 percent of military equipment is expected to deploy via sealift in a major conflict. USTRANSCOM, along with its sea and land components, Military Sealift Command (MSC) and Military Surface Deployment and Distribution Command (SDDC), and in coordination with the Department of Transportation’s Maritime Administration (MARAD), manages a strategic sealift portfolio of commercial and government-owned ships. These ships are operated by U.S. Merchant Mariners, ensuring preparedness for any scenario to move DOD resources anywhere around the world.

The government-owned portion of the strategic sealift fleet is aging, and over 50 percent of the surge sealift ships are approaching the end of their service life within the next 10 years and must be replaced. DOD plans to recapitalize the CONUS-based surge sealift fleet by retiring seven high-cost, low-reliable ships and purchasing used commercial ships in order to improve readiness to meet the National Defense Strategy. DOD seeks Congressional authority to decouple the purchase of nine foreign-built ships from the accompanying requirement to procure 10 new sealift or auxiliary ships in U.S. shipyards, in order to expeditiously realize readiness improvements.

USTRANSCOM is partnering with CIMSEC to solicit articles on strategic sealift. Potential papers could approach the topic from any angle, such as USTRANSCOM’s use and management of the strategic sealift fleet; the fleet’s multi-service dimensions (Army and Navy, plus joint staff at USTRANSCOM), multi-department relationships and operations (DOD and DOT), multi-sector (government and industry) composition; the anticipated capacity gap as vessels age; and plans and approaches to recapitalization.

Authors are invited to write on these topics and other issues potentially impacting strategic sealift in the future. Send all submissions to Content@cimsec.org.

Editor’s Note: This topic week has since concluded and its submissions may be viewed here.

Dr. André Kok is a public affairs specialist at United States Transportation Command, headquartered at Scott Air Force Base, III, where he’s been for the last two years. His career includes almost 10 years in uniform as an Air Force public affairs officer as well as civil service with the Department of Defense, Department of Agriculture, and Department of Veterans Affairs. His doctoral dissertation at Regent University in Virginia focused on the role of social media in cross cultural adaptation.