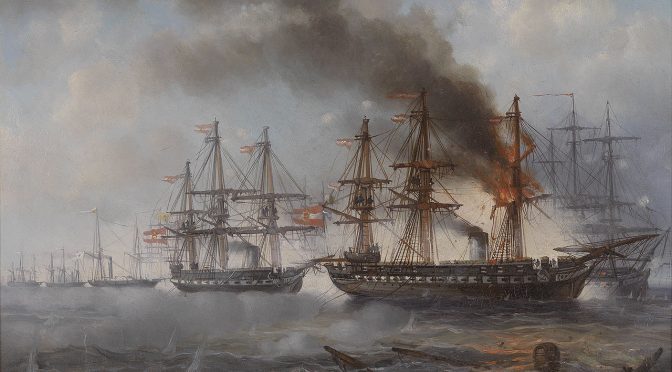 Most people would not think of modern land-locked, mountainous Austria as a maritime power, and many of those that have heard of the Austrian Navy wonder why the Nazis wanted an Austrian U-boat captain in the Sound of Music. From 1797 until 1918, the Kaiserlich und Königlich (K.u.K.) Austro-Hungarian Navy fought naval battles against the Danes, French, Italians, and British on European seas, and deployed as far as the South China Sea.

Geographically, Austria was a land power, with little maritime trade and many continental enemies. Following Napoleon’s victories in Italy, the Austrian Empire and France signed the Treaty of Campoformio in 1797. France received Belgium, Lombardy, and territory along the Rhine, while Austria received the Venetian Republic and their navy, a solid base to create a deterrent force.

However, caught in the maelstrom of the Napoleonic Wars, Austria did not have the finances to both fight Napoleon and build a powerful navy. Thus the navy played a minor role in the Napoleonic Wars, and in those early days Austria had little idea of naval strategy. The Austrian Navy’s fortunes ebbed and flowed as Napoleon’s forces marched too and fro across the European continent.

Following Napoleon’s abdication in 1814, Austria inherited the former fleet of the Napoleonic Kingdom of Italy, comprised of several newly built ships of the line and frigates, as well as the officers and crews of the vessels.1 It took Austria a long time to learn the advantages of sea power, and by the time she did, she had already lost Venice and its attendant dockyards to the newly unified Italy.

Austria’s ignorance of sea power’s benefits prevented her from expanding foreign trade, and caused her great diplomatic embarrassment during the early 19th century. In 1817, Austria sent a merchant ship to Canton, China, flying the new red and white ensign (the present Austrian National flag). However, the ship was refused entrance because the flag was not recognized by the Chinese.

During the Franco-Austrian War of 1859, the French fleet sailed into the Adriatic and dominated the sea. The Austrian fleet withdrew into their fortified harbors. The Adriatic Sea should have been an Austrian lake, but she lacked the strength to defend it in the face of the larger and more powerful French Navy. A notable incident from this humiliating affair was the return of the Austrian frigate Novarra, from a research-motivated circumnavigation of the globe. Napoleon III declared her a neutral vessel, “Because she was carrying the scientific treasures of value to the whole world.”2

In 1860, the Sardinian Prime Minister, Prince Cavour, sent the Sardinian fleet to blockade Ancona and support Garibaldi’s attacks on the Italian Marches. This caused a terrible fright along the Dalmatian coast, because of irredentist Italian claims to the region. The fears only ceased when Britain declared she would not recognize Italian claims to Dalmatia and Istria.3  This humiliation, in conjunction with Italian naval construction, drove the Austrians to rebuild their navy.

In 1854, a railroad from Vienna to Trieste was completed, which spurred regional commercial activity and rejuvenated foreign trade. Maritime activity fueled the creation of jobs and economic well-being, while naval construction spurred the economies of Istria and Trieste and gave rise to popularity in the Parliament. Advances in technology had rendered the previous generation of Nelsonian ships of the line obsolete; steam, armor, and the screw propeller, among other technologies, gave smaller ships a fighting chance against great ships of the line and allowed lesser powers to catch up and rapidly achieve a sort of parity with great naval powers.

Even without an indigenous shipbuilding industry, Italy had become the third largest naval power in the world. All of her ships came from British and American yards.4 Ferdinand Max, brother of Franz Josef, and Commander in Chief of the Austrian Navy, argued for increased construction and capabilities because, “a well-ordered propeller squadron only a few hours from Corfu or the Italian coast would make Austria a more attractive ally to Britain or France.”  Throughout this period, Ferdinand Max fought for every florin possible in the budget for construction of a capable, modern Austrian Navy. At the end of 1860, he ordered two screw-propeller frigates constructed at Trieste. 5

Archduke Ferdinand’s new navy fought the last fleet action with wooden ships in the Second Schleswig War against Denmark in 1864. Simply getting to the North Sea was a victory in itself. Captain Wilhelm von Tegetthoff sailed his squadron for Lisbon, Brest, and the Downs. The British were not fond of having foreign navies so close to home, and they looked unfavorably on the Austro-German attack on Denmark. “British public opinion was aroused to the point that talk of war with Austria was common. The British Channel Fleet was ordered to the Downs, and a training squadron recalled from Portugal.”6 When Lord John Russell learned of the Austrian deployment, he threatened to send a British squadron to the Adriatic. The government in Vienna called his bluff, but the British attitude to the war would cause Habsburg headaches.

Tegetthoff’s squadron was supposed to break the Danish blockade of Hamburg. On May 4, 1864, Tegetthoff’s squadron encountered a superior Danish squadron off Helgoland. They fought until the Schwarzenburg, Tegetthoff’s flagship, was on fire and compelled to withdraw. Once the flames were extinguished, Tegetthoff returned to find the Danish (who had also suffered heavy damage) gone. Although, tactically a draw, the Danish did not renew their blockade of Hamburg, allowing Austria to claim victory. After the war with Denmark ended, Austrian Foreign Minister Mennsdorf-Pouilly signed an agreement with General von Roon which agreed to let the armaments factory Krupp sell naval artillery to the Austrians, although Prussia declined to purchase any Austrian built ships.7

Despite agreements to purchase Prussian naval artillery, Austro-Prussian military cooperation was short lived; Austria’s next war would pit her against Italy and Prussia, her erstwhile ally. On July 3, 1866, Prussia utterly defeated the Austrians in the north at Königgrätz, but in the south Austria was victorious on land and sea.

One week earlier, the Austrian army had routed the Italian army at Custoza. At sea, the Austrian Navy defeated an Italian invasion fleet at the battle of Lissa on July 20, 1866. Lissa was the first major armored fleet action in history. A superior Italian fleet was beaten and forced to withdrawal from the Dalmatian coast. According to estimates by John Hale, in Famous Sea Fights, “taking into account the number and weight of rifled artillery on ironclads, the Austrians had 1,776 pounds of shell to the Italians 20,392 pounds.” The victory over the Italian fleet was telling; the Italians lost 612 officers and men, along with two ironclads, while the Austrians lost 38 officers and men, two of whom were captains. In his book The Imperial and Royal Austro-Hungarian Navy, Dr. Sokol argues that, “in their excitement, the Italians often failed to load their guns before firing them,” which might account for the slight number of casualties suffered by the Austrians.

Emperor Maximilian of Mexico, formerly Ferdinand Max, Commander in Chief of the Austrian Navy, sent his congratulations to now Admiral Tegetthoff. “The glorious victory which you have gained over a brave enemy, vastly superior in numbers and nurtured in grand old naval traditions, has filled my heart with unmixed joy. With the victory of Lissa your fleet becomes enrolled amongst those whose flag is the symbol of glory, and your name is added to the list of naval heroes of all time.”

Lissa was not only the first major ironclad fleet action, but the sinking of the Re D’Italia by Tegetthoff’s flagship the Erzherzog Ferdinand Max by ramming brought that weapon back into vogue among naval architects and tacticians. It was not until the Spanish-American War almost thirty years later, that the ram would again lose favor. Despite the Austro-Prussian-Italian War having the first ironclad fleet battle, there was a lack of naval warfare through most of the conflict. Theorists studied Lissa, but the rest of the naval war neglected commerce raiding and blockades. Dr. Sokol asserts that is because both navies “thought of naval warfare chiefly as guarding their own coasts.” 8

Admiral Tegetthoff threw a party aboard his flagship for his captains after the battle of Lissa and charged the expenses to the navy budget. Later, the Ministry of Finance “deducted a sum from his salary each month, until he had paid off the cost.” Heroes and celebrities the iron men might have been, but bureaucratic infighting was not going to be easier, simply because they had defeated the Italians in a war that was already lost.9

Over time, the Austrian government learned to wield their increasingly effective navy. By the time of the Great War, Austria managed to hold her own against a combined Franco-Italian fleet. Between August 1914 and February 1917, Austria sank three Italian battleships, two Italian cruisers and a French cruiser, at the cost of one cruiser, an exchange of 85,000 tons for 2,300.10

While the bulk of the Mediterranean submarine patrols were performed by the German Navy (because their submarines were bigger and had more endurance), the Germans had loaned three of their larger submarines to the Austrian Navy.11 The Austrian submarine force was so effective in the Adriatic that the British Royal Navy was forced to support the rest of the Entente powers in their anti-submarine barrier patrols and mine fields across the mouth of the Adriatic Sea called the “Otranto Barrage.” Unlike the Royal Navy that had minimized their planning for submarines during war, Austria had integrated submarines into her naval war plans from the start; these submarines preyed on Entente shipping in the Adriatic and Mediterranean.

Austria was also a pioneer of naval aviation. Austria was the first nation to develop naval aviation in 1913. Early adoption of this capability allowed Austria to control the skies over the Adriatic for the bulk of the war. At the start of the war Austria had 22 seaplanes, and by the time Italy entered the war, Austria had 47 seaplanes. These planes were used for scouting enemy fleet movements as well as attacks on naval bases and vessels at sea.12

Despite the early success of the Austrian Navy, Austria and her allies ultimately lost that war. The Austro-Hungarian Empire was dismembered and new nations based on nationality arose. In Hungary, Admiral Horthy rose to prominent political office during the post-war years, becoming a right wing dictator who was later assassinated by the Nazis. After the fall of the empire, Austria retained the naval ensign as her own national flag, a subtle reminder of a glorious past. Today, the old red and white Austrian ensign flies over Schönbrunn and the Hofburg.

LT Jason Lancaster is a US. Navy Surface Warfare Officer.  He has a Masters degree in History from the University of Tulsa.  His views are his alone and do not represent the stance of any U.S. government department or agency.