Late summer has arrived in Annapolis, bringing the Brigade of Midshipmen back with it to the Naval Academy. The halls echo anew with the footsteps of midshipmen and I hear the muffled, disembodied voices of my colleagues delivering lectures through the walls. As I begin the teaching/learning cycle anew, first principles have often been on my mind. Today, I want to look at Seasteading through one of the first principles of the realist school of international relations theory. A major tenant of security studies supported by many realists is the so-called “Stopping Power of Water,” a term taken from Prof. John Mearsheimer’s The Tragedy of Great Power Politics. As part of our continuing focus on Seasteading and Sea-Based Nations (SBNs), I’m going to examine possible effects that SBNs may have on the stopping power of water and on the stability of the current international order.

In Prof. Mearsheimer’s opus outlining offensive realism, he describes “the stopping power of water” primarily as a barrier to power projection (particularly an amphibious assault):

Water is usually not a serious obstacle for a navy that is transporting ground forces across an ocean and landing them in a friendly state. But water is a forbidding barrier when a navy attempts to deliver an army onto territory controlled and well-defended by a rival great power. Navies are therefore at a significant disadvantage when attempting amphibious operations against powerful land-based forces (Page 114).

The policy aim of war (to paraphrase Clausewitz: “imposing one’s will on an enemy”) is very difficult to achieve – under Mearsheimer’s reasoning – without the use of land power. In other words, Mearsheimer believes that political change rarely occurs through the use of sea power alone (i.e. though blockades or other similar measures), and that states separated from others by large bodies of water can easily resist most ground assaults. Therefore, the greatest security threats arise from territorially connected states (think Germany and France in the 20th Century), or from states who can transport ground troops to a territorially connected ally (think Kuwait and the United States versus Iraq in the Gulf War).

How could SBNs affect the stopping power of water? Could they bridge the protective moat of the world’s oceans? Let’s imagine the full realization of seasteaders’ dreams: a world with thousands or tens of thousands of SBNs, all innovating different forms of government while sustaining a steady populations of hundreds of thousands or millions of seasteaders in locations both near the coast and far out on the open ocean. Would the world’s seas hold more, less, or the same amount of stopping power as before?

Sea-Based Nations wouldn’t change the objective difficulty of assaulting the beaches of great powers like China or the United States. However, if states could use SBNs located near an adversary through either diplomacy or conquest, then that SBN could serve as a staging base for the invading country’s forces. Think how difficult it would have been for the Allies to invade Europe without the United Kingdom nearby. As noted earlier this week, a SBN could serve in the same manner, but with some key differences I’ll discuss later. Island bases affect something I’ve talked about before called the “Loss of Strength Gradient,” yielding significant advantages to the owner. Looked at another way, SBNs represent larger, more capable Afloat Forward Staging Bases. Since they would be sustained by citizens and their economic activities, they might become the “poor nation’s aircraft carrier,” particularly if they are engineered to have some kind of propulsion. 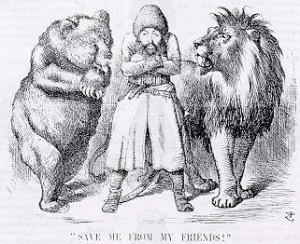 While the stopping power of water itself seems like it would remain intact, the proliferation of SBNs could start a new Great Game among world powers as they vie for influence or control with/over new maritime city-states in order to gain an advantage over other potential opponents. The existence of many SBNs that are – to some degree – mobile in their physical location and political alliances and vulnerable to even second- or third-rate navies could damage that portion of global stability that comes from the vastness of the world’s oceans. Paradoxically, this means that instead of obtaining greater freedom from established governments, SBNs might invite more attention from great powers who seek to gain an advantage over a potential adversary. I don’t pretend to know what effects this attention and interest might have on the domestic politics of SBNs, but they strike me as both potentially significant and damaging to the stated goal of seasteaders to break from established forms of government.

SBNs do differ in many important ways from Great Britain in World War II. For one, they can be sunk: even the most solidly build floating platforms would be vulnerable to attack, particularly from torpedoes. For another, they need to be flagged by an existing country, at least under my limited knowledge of current admiralty law. These facts could influence their foreign policies in important ways.

Given the potential instability SBNs could introduce to the balance of power, it’s also interesting to consider whether great powers would seriously allow their formation.

It seems easy to conceive of SBNs as communities allowed to evolve in isolation, but their very existence will affect the strategic calculus of the world’s great powers. As a result, they may not even be allowed to evolve as they may wish. Conversely, the growth of a diverse array of SBNs would challenge some of the key principles of realism. Regardless, SBNs promise to drastically alter the way we think about international relations.