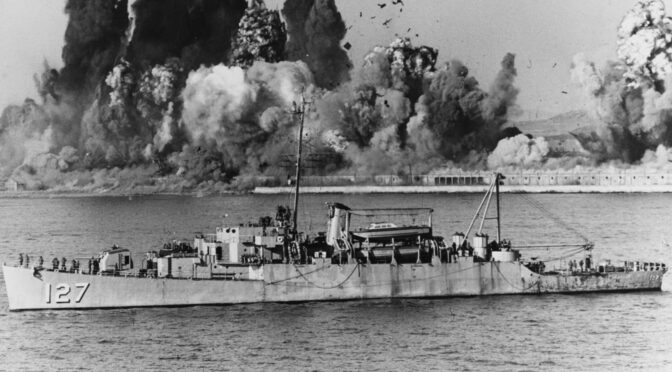 As the Department of the Navy implements the Marine Corps’ Expeditionary Advanced Base Operations (EABO) and the Navy’s Distributed Maritime Operations (DMO) concepts, sealift and logistics plans must also adapt to support them. This process is already well underway with the development of the Light Amphibious Warship (LAW) and a range of drone efforts to deploy and sustain small, forward deployed units.

Unfortunately, the ability to support the numerous small positions, as envisioned by EABO, is limited more by the number of deployable hulls than the capacity of those hulls. Thus, while the new platforms will help, it will take time for them to arrive, and they will almost certainly not be enough to satisfy the demand for distributed sealift when they do.

This paper proposes a complementary solution which could be implemented immediately and continue to operate in parallel with these new platforms to further increase sealift capacity and flexibility. Simply put, warships can provide sealift support for EABO forces. This would naturally have to fit in with other tasking for these ships, so it generally won’t provide predictable resupply, especially when using high-demand assets, but it would still provide additional sealift capacity at essentially no cost.

The implementation details are naturally dependent on tactical, operational, and strategic plans which cannot be publicly discussed in full, and which will inevitably be further refined by experiments and wargames. That said, it should be readily apparent that supplies can come from shore facilities or large sealift ships operating farther back for safety, with fresh water being particularly relevant to this discussion since it can be generated aboard ships and transported ashore in collapsible bladders to minimize its impact on the ship. It’s also worth noting that keeping large sealift ships further from the front puts them closer to friendly shores, reducing their transit time and allowing them to deliver supplies at a higher rate.

With these basics established, we can move on to a brief overview of the opportunities each ship type presents.

Perhaps the most familiar combat platform in this discussion is the submarine. The special forces community is very familiar with operating from submarines, and submarines are likewise familiar with hosting special forces. Therefore, it would be simple to task special forces with EABO-type missions using this deployment method. Naturally, the robust joint special operations community could easily use its existing pipeline to train Marines to deploy from submarines as well, so this offers an extremely covert and survivable, albeit low-capacity, sealift option.

It’s also relatively easy to improve the ability of submarines to support EABO forces by developing self-propelled cargo pods to bring supplies ashore. Such a pod might be as simple as a cargo tube with a motor and compass that drives in a pre-programmed direction until it beaches itself, and could be strapped to the side of the sub or carried in the new Virginia Payload Module (VPM) in addition to existing deployment options.

Finally, it may be worth revisiting the old amphibious warfare submarine concept in the future Large Payload Submarine to further enhance these resupply capabilities and split the underwater missile carrier role onto a drone.

While aircraft carriers and, to a lesser extent, their escorts, are obviously not designed for amphibious warfare, there are clear similarities to amphibious warships. Most critically, they operate helicopters, and now the CMV-22B Osprey Carrier Onboard Delivery Aircraft, so they could easily utilize established amphibious warfare techniques to deploy personnel, supplies, and heavy equipment over long distances. Marines and smaller supplies could be distributed across the strike group, while heavy equipment could potentially be stored on the carrier’s hangar deck if space is available.

Alternatively, any version of the V-22 could be flown to the carrier for refueling, and then sent on its way to provide rapid, long-range deployment with no impact on the carrier’s air wing. This would protect vulnerable sealift ships through the relative safety of distance while still letting their aircraft reach their destinations, and could also facilitate staging from still more distant (and less vulnerable) shore facilities.

Finally, while it would probably be too risky to bring an aircraft carrier into boat range of the shore, supplies and personnel could be transferred to a smaller platform like LAW, an Unmanned Surface Vessel (USV), a patrol ship, a Coast Guard cutter, a commercial vessel, etc. which do have the range to act as surface connectors for the carrier.

Independent surface combatants have a wider variety of options for unconventional sealift, although this flexibility is offset by the variety of missions they may be assigned and their more limited resources. For example, while they could stage V-22s or perform organic airlift with their H-60-family helicopters, this could conflict with ASW operations, especially if the ships’ aircraft are used. Alternatively, delivery ashore could be done by boat since these ships can afford to get closer to the coast than a carrier, especially if they are called on to provide fire support for EABO Marines. Nevertheless, the range and payload of a RHIB is still a limitation. The most attractive option is transferring cargo to a larger delivery platform as discussed above, but this may be difficult to accomplish in practice since these surface combatants weren’t designed to offload heavy cargo or personnel to a smaller vessel. Still, in spite of these limitations, the number of destroyers currently in service and future frigate plans makes surface combatants an important option for nontraditional logistics. Consequently, these platforms will probably offer the greatest return on investment as the Navy explores ways to implement this concept.

The misnamed Littoral Combat Ships would be particularly useful for nontraditional sealift. Since these ships are better described as drone carriers, they have the internal volume and launch capacity to deploy substantial equipment or carry specialist facilities to support other units in theater. Their high speed will also be useful for rapid forays into dangerous waters, and the reduced demand for other missions means they can more easily be tasked with these support roles.

On the specialist facilities front, the modular nature of these ships means it would be easy to build very capable medical, repair, C2, or intelligence facilities into their mission bays. This would provide much greater mobility and survivability for these support activities than island-based EABO installations, especially if additional air and missile defense capabilities like a Mk 56 lightweight vertical launch system for the RIM-162 ESSM are also added.

While it’s easy to see the future LMACC as a simple corvette since it mounts heavyweight anti-ship missiles on a 600-ton hull, sealift is a core part of its design. Its survivability is greatly enhanced by blending into littoral clutter and it is intended to shoot targets spotted by other forces. This means it will preferentially operate in conjunction with EABO Marines so virtually every combat mission will be ideally tailored to provide sealift support for the Marines. Its very long range also provides operational flexibility to perform secondary lift between islands and act as a connector for larger vessels operating further back. The only major limitation is that its 11m RHIB can’t carry heavy equipment, but its very shallow draft and navigation sonar will let it get close enough to shore for Marines to swim if required.

Furthermore, LMACC is heavily armed for land attack and well equipped for missile defense, especially using electronic warfare, so it is uniquely suited to high-risk missions. When islands are contested and too dangerous for most platforms to approach, LMACC can reinforce or extract embattled Marines, provide fire support, and sink hostile warships. This means LMACC not only increases total sealift capacity, but provides unique capabilities not available anywhere else in the fleet.

In summary, the Navy’s existing fleet of warships offer opportunities to expand sealift capacity, and future platforms promise unprecedented new capability at minimal cost. These new distributed operating concepts synergize well with the numerous hulls but limited cargo capacity of these nontraditional sealift platforms to expand the reach of the American combat logistics system. Since these hulls already exist, the Department of the Navy can rapidly test and implement these concepts and continue them in parallel with current sealift expansion and recapitalization plans to improve overall capacity.

The use of warships as nontraditional connectors can also reduce risk to the logistics fleet by keeping these large, vulnerable ships further from the enemy. This obviously isn’t a silver bullet that will solve every problem, but it could be a useful piece of a future logistics system and help the Joint Force affordably meet overall needs.

Ben DiDonato is a volunteer member of the NRP-funded LMACC team lead by Dr. Shelley Gallup. He originally created what would become the armament for LMACC’s baseline Shrike variant in collaboration with the Naval Postgraduate School in a prior role as a contract engineer for Lockheed Martin Missiles and Fire Control. He has provided systems and mechanical engineering support to organizations across the defense industry from the U.S. Army Communications-Electronics Research, Development and Engineering Center (CERDEC) to Spirit Aerosystems, working on projects for all branches of the armed forces.

3 thoughts on “Beyond MSC and Amphibs: Unconventional Sealift”