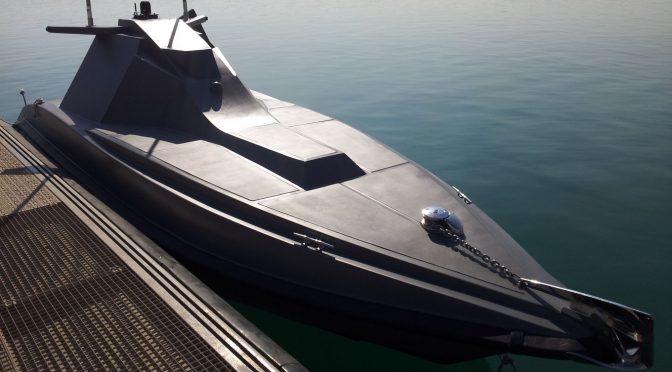 As the knife slides out, Foxtrot 2-1-1 doesn’t notice the blood. The enemy officer’s hand slumps away from the leg holster. Firearms are powerful, and a powerful comfort… but they’re useless when you’re sitting down and a blade is closer than the length of the barrel. Screens flash as untended command prompts stack up from systems patrolling several surrounding blocks. 2-1-1 feels an impulse transmitted from outside. He plants the charge as he leaps out of the torn metal hatch. Prone on the pavement outside, 2-1-1 is sprayed with rocks as an unmanned bipedal weapon vehicle (UBWV) smashes a short-cut through a corner storefront.

With a “thump”, smoke pours out of the armored vehicle. The UBWV’s Gatling cannons whirr softly – one aimed at 2-1-1, the other aimed at his fireteam in the second-story window above. Rounds remain disengaged as it awaits target approval from the smoking corpse. Fireteam Foxtrot-2-1 has 5 seconds until the UBWV shifts its engagement prompt to another station, or engages automatically if RoE has changed. 2-1-1 leaps up, knife still in hand. He pulls the knife across a protective joint seam as his second hand comes up with his sidearm. Bypassing layers of armor plating and protective industrial coating, a full magazine of 9mm is enough to fry the UBWV’s ability to move, detect, and engage.

Unmanned systems are powerful, and a powerful comfort.

2-1-1 holds up his hand, the fireteam stacking up behind him before the next street. Like finding that word you haven’t been able to put your finger on, each member of 2-1 suddenly receives a series of mental images, intentions, and concepts outlining their next direction and target from Foxtrot Actual. They disappear through a doorway as a humming echoes from over one of the rooftops.

Fireteam 2-1 hides from aerial surveillance, picking its way through jagged passageways and unnatural, twisting stairs. It is a dusty labyrinth created when alleyways and building interiors are re-arranged by explosives. Burrows are dug throughout the ruin, gaunt figures hiding from a war between man and machine. Each piece of data is collected, assessed, and stored temporarily away in the subconscious for later use or transmission.

Claws scrape across the concrete. Rubble and blood explode from the rear of the team. Foxtrot 2-1-4 is in a heap, a metallic, dog-sized quadruped pinning him down. 2-1-4 screams as the sharp claws dig in and an articulating maw of blades remove the rasping throat. Against every instinct, everyone drops their weapons as they fall to the ground. Detecting no armed, moving objects of roughly human temperature – the “thing” stands by for one of the limited foot patrols to check the targets.

One of the warm shapes move, drawing a pistol from a hidden chest holster. As the “thing” leaps down upon him, the two shapes on either side rise up, pull the “thing” up and onto its back from either side – smashing it down onto a piece of rebar sticking through a cratered wall.

The “thing” represented the reality commanders didn’t want to face – they couldn’t control everything from over the horizon. The abandoned command vehicle, so close to the battlefield, was a bastion against electronic warfare and the limitations of physics. The “thing”, however, was invested with the autonomy eventually demanded by the enemy’s ingenuity.
Unfortunately, a certain fear, combined with an institutional lack of creativity, always left autonomous systems with exploitable weaknesses. Commanders combined the worst of their self-confidence with their hesitancy to commit. Whole suites of artificially limited systems were deployed into the field with the assurance of a cure-all.

With a foot patrol inbound, and the fireteam within the security perimeter, Foxtrot-Actual sends its final collection of images and directives. 2-1-1 turns to 2-1-2, saluting in one of the few remaining traditions. The sentiment represents a larger series of command processes and adaptations that have transferred the designation of 2-1-1, fireteam leader, to 2-1-2. Former 2-1-1 continues through the rubble, now designated by Foxtrot Actual as Foxtrot 2-X. 2-1-1 leads the remaining fireteam members – and the incoming foot patrols – away from the area.

The warfighter on the ground had always been a dangerous and adaptable machine.  Even the greatest autonomous system would, in some aspects, be a cheap attempt to imitate millions of years of evolution. In the air, at sea – the speed and range of combat, the type of platforms involved, had changed to the point that the human was almost secondary to the equation. On the ground – from the easily fueled musculature to advanced cognitive functions – a human may always be best. An augmented human – cognition enhanced chemically with electrically driven muscles pulling joints wrought with new alloys and plastics – but still a human.

But where was automation’s competitive advantage? Computers had become progressively better at understanding vast logistical and operational problems: streamlining global transport networks, beating humans at “Go”, automating a large portion of global market trading. Smaller issues of context were mastered as well, from the ability to recognize animals to human emotions. Computers could read data from minds – and had just started to show glimmers that data could be contextualized.

After leadership’s repeated failures to understand or properly exploit autonomy in the field, someone aimed the question in a different direction. “How much Operational Availability do I sacrifice when everything from procurement to maintenance is derailed by egos or self-deceit? What is the human cost of the collected seconds, minutes, hours, and days of human friction as the front awaits orders? Do I need warfighters constrained by the indecision of dozens of human beings attempting to interpret their intelligence & advice before directing action?” Was an autonomous system’s competitive advantage… in the field?

With a sentry’s severed hand pressed up against the door access panel, Foxtrot 2-X enters the enemy’s field command. Several dozen figures hunch over flickering screens in the dark – directing assets based on the verbal and written reports from units across the battlefield. Amid hushed voices, fingers patter across touch-screens in response to a constant stream of command prompts from unmanned systems.

Of the several dozen or so figures in the room, only a handful realize what is about to happen. Unlike the isolated command vehicle, this space is large, and at least three weapons are drawn to kinetic effect on Foxtrot 2-X.  Two white phosphorous grenades roll onto the watch floor as a bleeding 2-X aims his collapsing body against the door – closing the heat and screaming watch standers inside.

With his final breath, a mix of conscious and subconscious observations, passively collected signals intelligence, observations on base defenses and sentry procedures, and a series of final stress levels, queues, and correlated emotive reactions is transmitted to Foxtrot Actual.

In orbit around the battlefield, Foxtrot Actual’s systems receive, analyze, and integrate this data for further operational planning and live assessments of troop stress levels. 2-X’s personnel file, last noted tactical adaptations, and final mission report are archived for analysis and dissemination. His fireteam’s method of destroying bladed quadrupeds has already been uploaded from 2-1, and was transmitted to Foxtrot’s human fighters. Finally, designation 2-X is made available for re-application.

Through the collective cloud of its forces’ thoughts, Foxtrot Actual perceives a smattering of enemy soldiers retreating through a wasteland of stalled robotics. Foxtrot Actual directs Foxtrot units into the new vacuum. It catalyzes the decision making of its forces as they plot their movements, a machine in the subconscious ghost. Somewhere, an extra cooling fan kicks on as Foxtrot Actual determines how best to exploit these latest opportunities.

Rather than replacing the warfighter, someone asked, “maybe it’s time to replace the commander?”

Matthew Hipple is a Surface Warfare Officer in the US Navy, and President Emeritus of CIMSEC. He used to write frequently for USNI and War on the Rocks, but spends most of his time now amusing a precocious 10 month old.*

*Due to CIMSEC affiliation this piece was not under consideration during the judging process and is published along with all other pieces submitted in response to the Fiction Contest call for articles.