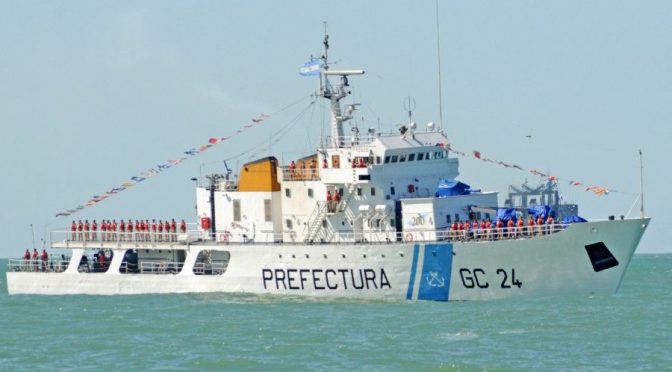 The Argentine Coast Guard stopped a South Korean trawler that was allegedly operating without authorization in its Exclusive Economic Zone (EEZ) in early February. The non-violent operation highlights how Asian fleets are willing to travel long distances in order to make a profit, and how Latin American navies and coast guards need to be more focused than ever before on combating unauthorized fishing.

The latest international fishing incident in Argentine waters occurred when the South Korean trawler O Yang 77 was detected by Argentine authorities, which deployed PNA Doctor Manuel Matilla (GC-24), a Mantilla-class patrol boat, to stop said vessel. According to Infobae, the vessel was detected around Chubut province, in the Southern part of Argentina, with its nets down. Aboard the vessel, Argentine authorities found some 130 tonnes of fish. A 11 February video posted on the Argentine coast guard’s Twitter account shows the  O Yang 77 docked in the South American country’s Comodoro  Rivadavia port.

South Korean authorities argue that the vessel, which belongs to Sajo Oyang Corporation, did not violate Argentina’s EEZ.

The aforementioned incident highlights one obvious fact: illegal, unauthorized and unregulated (IUU) fishing does not occur simply because Latin American and Caribbean fishing vessels break the law, but extra-regional vessels, particularly large fleets from Asian nations, are willing to travel long distances in order to make a profit and satisfy their nation’s demands.

Previous commentaries by the author noted the problem of IUU fishing in Latin America (see CIMSEC’s “Latin American Navies Combat Illegal Fishing”), of which Chinese fleets are repeated offenders. For example, in 2016 the Argentine Coast Guard shot at and sank a Chinese fishing vessel, Lu Yan Yuan Yu, which was part of a larger fleet operating in Argentina’s EEZ. The following year, the Chinese vessel Fu Yuang Yu Leng 999 was spotted close to the Galapagos Islands and detained by Ecuadorian authorities. An inspection discovered over 300 tons of a variety of fishes, particularly hammerhead and silky sharks as well as other endangered species (see CIMSEC’s “A Growing Concern: Chinese Illegal Fishing in Latin America”). A year later, in late 2018, Peruvian authorities stopped the Chinese vessel Runda 608 for fishing without authorization in Peruvian waters.

Ironically, at the time of this writing, yet another incident regarding Asian fishing fleets occurred in the South Atlantic. In mid-February, the patrol boat Mantilla was once again called into action, this time to help the Zhongyuanyu 11, a Chinese fishing boat that collided with the Spanish fishing vessel Pesca Vaqueiro, some 16 km outside Argentina’s EEZ. The Argentine platform was deployed to rescue the crew of the sinking Chinese ship, while the Spanish vessel apparently did not suffer significant damage. These incidents highlight the constant presence of extra-regional fishing vessels in the South Atlantic.

How are Regional Governments and Navies Reacting?

Unsurprisingly, whenever a major illegal fishing incident occurs, there is an understandable public outcry and regional governments promise to protect a country’s maritime resources. For example, after the Lu Yan Yuan Yu incident in the Galapagos Islands, the Ecuadorian Navy deployed its submarine Huancavilca to help combat unauthorized fishing. Quito also reportedly sent a formal letter of protest to Chinese authorities about the incident, though it is unclear (and highly doubtful) if any measures have been implemented to avoid future violations of Ecuador’s maritime sovereignty by Chinese vessels.

Successfully and efficiently protecting an EEZ is not easy. Additional vessels for navies and coast guards would certainly be helpful and, to be fair, several Latin American nations continue to upgrade and expand their navies. For example Argentina has confirmed the purchase of four French offshore patrol vessels; Brazil has purchased a carrier (see CIMSEC’s “Atlantico: Brazil’s New Carrier”) and is constructing submarines; Mexico has constructed a long-rang patrol vessel and various OPVs; and Peru is constructing a second landing platform dock, BAP Paita.

However, it is also necessary to obtain aerial platforms that can help monitor and intercept suspicious vessels faster. Space programs can be additionally helpful to locate suspicious ships as well – the Chinese vessel Runda 608 was reportedly located via space-based capabilities. In other words, the answer is not just adding more ships to a fleet to successfully combat illegal fishing; aerial platforms and even space technology are also critically important.

Moreover, governments have a vital role to play. Robust legislation to combat IUU fishing is necessary, such as heavy fines or even prison time for offenders, but there also has to be action at the diplomatic level when illegal fishing is conducted across national borders. It will be important to monitor whether Buenos Aires confronts Seoul over the latest incident, though it is unlikely as Buenos Aires-Beijing relations remain the same after the Fu Yuang Yu Leng 999 incident.

As a corollary to this analysis there is an ironic detail worth highlighting: in late January the Argentine news service Ambito reported that South Korea is planning to donate an Ulsan-class frigate to Argentina. This report has been frequently cited in other media outlets. Such a move is not without precedent as Seoul donated a corvette to Peru a few years ago as well. It will be interesting to see if Seoul does in fact donate a warship to Buenos Aires, which would likely be utilized for patrol operations to crack down on maritime crimes in Argentina’s EEZ, such as illegal fishing.

The O Yang 77 incident will not be the last time that Asian fleets fish without authorization in Latin American waters as these vessels constantly operate in the South Atlantic – this is best demonstrated by the collision between the Zhongyuanyu 11 and the  Pesca Vaqueiro just days after the  arrest of the O Yang 77. Demographic growth, the eternal quest for profit, and depleting maritime life in other bodies of water mean that extra-regional fleets will travel great distances for new sources of fish.

It is bad enough when illegal fishing occurs domestically (e.g. a Peruvian fishing vessel operating illegally in Peruvian waters) or across regional borders (e.g. a Ecuadorian vessel ilegally fishing in Peruvian waters). The scope of IUU fishing by Asian fishing fleets could help bring about the destruction of an already fragile Latin American maritime ecosystem.

Latin American navies and coast guards are the tip of the spear in combating IUU fishing, and they have a mighty opponent in front of them.

Wilder Alejandro Sanchez is an analyst who focuses on geopolitical, military, and cybersecurity issues. He tweets at @W_Alex_Sanchez.