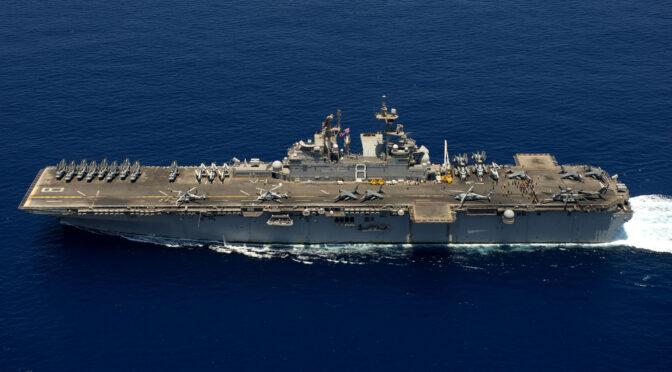 By The Good Sailor Svejk

The US Navy has an ASW problem. The carrier strike group (CSG) has a medium range ASW aircraft coverage gap, and the amphibious ready group (ARG) has no organic ASW coverage at all.1 The current concept of operation is for surface combatants and P-8 Poseidon maritime patrol planes to serve as ARG escorts. In LCDR Jason Lancaster’s article, “Close the Gaps!” the author stated that P-8s work for the theater ASW commander but are a limited resource.2 Surface combatants are also a limited and dwindling resource. Despite the 2017 National Defense Authorization Act (NDAA) 355 ship requirement, the cold-hard reality reflects a continuous decline of available surface combatants. The 2022 Navy budget proposal includes decommissioning 22 cruisers (CGs) and nine littoral combat ships (LCSs) by 2027 along with the elimination of the LCS ASW mission package.3 Fleet shrinkage requires out of the box thinking to increase the protection of the ARG.

In contrast to the decreasing US Navy surface forces, Russia and China continue to produce and deploy capable and quiet submarines; many are equipped with long range anti-ship cruise missiles with ranges up to 200NM. Without changes to ARG-Marine Expeditionary Unit (MEU) composition, hostile submarines continue to hold the ARG-MEU at risk which is why the Navy and Marine Corps must design a new ASW concept for ARG protection.

An integrated Navy and Marine Corps team could develop a composite ASW element for the ARG. This element should include Navy and Marine Corps aircraft outfitted for ASW, Navy personnel to support the Amphibious Squadron Composite Warfare Commander, and Command, Control, Computers, Communications, and Intelligence (C4I) systems to provide protection for the ARG in the ASW fight. Many of these systems already exist and only need to be adapted for the ships and aircraft of the ARG.

The best way to eliminate the organic ASW coverage gap in the ARG is to incorporate existing Navy helicopters into the ARG. ARGs have deployed with MH-60Rs aboard and in 2020, the USS Wasp participated in Exercise Black Widow, a high end ASW exercise as an airborne command and control (C2) platform despite the helicopter’s limited range and endurance. To overcome long range submarine threats, the Navy operates long range ASW aircraft such as the P-8. However, the Navy has been plagued by a medium range ASW aircraft gap since the S-3 Viking retired from the fleet. Even worse, the Marine Corps operates no ASW capable aircraft despite a history of integrated operation from naval ships. The radical departure of the Marine Corps current force demonstrated through General Berger’s guidance “Force 2030” along with his written and vocalized concern on ASW means that now is the perfect time to experiment with different ways for the Navy-Marine Corps team to provide organic ASW capability.

Over the next few years, the Whidbey Island and Harpers Ferry class ships are scheduled to be decommissioned, changing the current ARG comprised of a Landing Helicopter Dock/Assault ship (LHD/A), a Landing Port Docking ships (LPD), and a Dock Landing ship (LSD). Instead, ARGs will deploy with an LHD/A and two LPDs. This change drastically increases the air capability of the ARG. An LPD has a hangar designed to support one MV-22 or two MH-60s along with an air department that enables the simultaneous operation of well deck and flight deck. Furthermore, the introduction of USS America (LHA 6) and USS Tripoli (LHA 7) increases the flight deck capabilities of the ARG, demonstrated by the Lightning Carrier Concept demonstration in April where the USS Tripoli embarked 20 F-35Bs.

In addition, the Marine Corps is experimenting with different MEU Air Combat Element (ACE) compositions. Future LHD/A concepts could embark as many as ten F-35s and ten MV-22s aboard the LHD/LHA, nearly a twofold increase of fixed wing over the six to eight F-35/AV-8 and twelve MV-22 the ACE currently utilized. This composition would free up MV-22s for a new ASW variant. The removal of two MV-22s from the LHD would enable the Marine Corps to outfit those two as ASW platforms for operation from an LPD.

General Berger insisted that “The undersea fight will be so critical in the High North and in the western Pacific that the Marine Corps must be part of it,” but the Marine Corps has no ASW capability. However, the Marine Corps has aviation assets that could fill the bit quite nicely.4 An MV-22 has the internal payload capacity and range to augment the MH-60R ASW workhorse of the Navy. Since the MV-22 is a tilt-rotor, the aircraft offers far more range and payload capacity than its helicopter counterpart.5,6 The Navy and Marine Corps could reduce acquisition risk by employing the radar, electronic warfare suite, sonobuoy systems, dipping sonar, and Link systems used by MH-60R. The MV-22s payload capacity would enable it to carry more sonobuoys and torpedoes than an MH-60R. MV-22s could also employ the Multi-static Active Coherent (MAC) buoy systems found in the P-8. If those systems fit into the MV-22, it would enable the ARG to employ the most capable sonobuoys in service today. Reusing existing systems would research and development, simplify logistics, and streamline training. Additionally, the Navy and Marine Corps could integrate schools and spare parts. Marine Corps ASW could also augment future Navy ASW operating concepts as the Navy continues to acquire carrier borne variants of the V-22s which could close the Carrier Strike Groups’ (CSG) medium range ASW gap.

An Air ASW Element comprised of five to eight MH-60Rs and two MV-22 ASW variants could provide limited around the clock and robust coverage. Unlike carrier strike groups, 24-hour flight operations are not typical in a typical ARG. A CSG can provide sustained 24-hour coverage by designating cruisers (CGs) and destroyers (DDGs) attached to the CSG to provide night coverage. This allows the air crews to consistently fly at night and not violate Naval Aviation Training Operation and Standardization (NATOPS) crew rest or flight deck operation limitations. To enable the continuous ASW coverage, the ASW air element would need to be distributed amongst the ships of the ARG to allow air crew and flight deck personnel time to rest.

With two LPDs in the future envisioned ARG, there should still be sufficient flight deck space to embark an organic ASW element. An LPD has two spots large enough for landing an MV-22 and 4 expanded spots. Aside from the large flight deck, the hangar is also large enough to support one MV-22 or two MH-60Rs.

Beyond just a lack of organic assets, the ARG also lacks an ASW staff element. The Destroyer Squadron (DESRON) conducts surface warfare (ASuW) and ASW to protect the carrier. Currently, the Amphibious Squadron (PHIBRON) works with the MEU and conduct amphibious operations and in the CSG composite warfare construct, DESRON serves as the sea combat commander, protecting the force from surface and subsurface threats. In the ARG composite warfare construct, an LPD typically performs the role as the sea combat commander. To augment ASW support, amphibious surface warfare officers (SWOs) the PHIBRON often request DESRON support during ASW exercises. During workups such as Composite Training Unit Exercise (COMPUTEX), destroyers from the DESRON have performed ASW command and control functions by tasking external P-8s and helicopters working with the ARG. To properly staff the ASW Staff Element on the ARG, the proposed element would consist of three planners and eight watch standers composed of ASW trained officers, Operations Specialists, and Sonar Technicians, and a Navy Oceanographic ASW Team (NOAT) to provide sustained 24-hour ASW command and control for the Sea Combat Commander.

Because current amphibious ships do not have any systems optimized for ASW C2, the staff element would require a command-and-control system that incorporates ASW. This system would need installation aboard the Sea Combat Commander ship in the ARG. The DESRON module on an aircraft carrier has several systems integrated into Ship’s Self Defense System (SSDS) to provide C2 of ASW forces for the Sea Combat Commander. The AN/UYQ 100 Undersea Warfare Decision Support System (USW-DSS) is designed for use by ships, destroyer squadrons, and shore nodes like the theater undersea warfare commander to collaboratively plan and execute ASW missions. This system enables a common tactical picture that can include environmental data, sensor tracks, and sensor metrics.7 AN/SQQ-34 Aircraft Carrier Tactical Support System (CV-TSC) which is designed to integrate ASW systems from across the carrier strike group and P-8 maritime patrol planes.8 In addition to systems like these surface combatants carry antennas designed to receive information from sonobuoys. Other systems enable the ship to monitor any sonobuoys in the pattern and to observe the forward looking infrared (FLIR) camera. Since the Navy already has many of these systems on aircraft carriers, there should be minimal friction for integrating them into SSDS, the LPD’s combat system. Although, LPDs have controlled ASW without these systems, these systems will make command and control significantly easier for the sea combat commander.

ASW is a team sport. These proposals are not intended to replace P-8s or other antisubmarine warfare combatants. They are designed to improve the capability of the ARG to defend itself in the face of submarine threats. The addition of Navy and Marine Corps aircraft with a dedicated ASW staff element and appropriate C4I systems to plan and execute the fight will improve the lethality and self-defense capabilities of the ARG. This resulting improved survivability would ensure the Amphibious Ready Group’s main battery, the Marine Expeditionary Unit arrives in the amphibious objective area unharmed and ready for battle.

The Good Sailor Svejk is a U.S. Navy Surface Warfare Officer with experience in operational plans, amphibious ships, destroyers, and destroyer squadrons and has a master’s in history.

One thought on “Antisubmarine Warfare for the Amphibious Warfare Team”