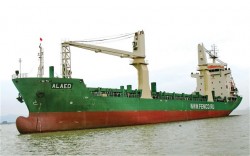 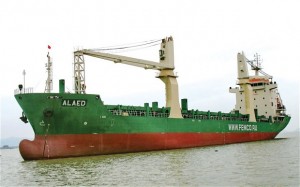 The MV Alaed, a Russian cargo vessel reportedly shipping armament to Syria, including attack helicopters, has lost its insurance coverage due to illicit cargo clauses, CNN reports. This comes after calls from the U.S. government on the British government and subsequent pressure on London-based The Standard Club, insurers of the vessel’s owners, FEMCO.

Dutch authorities hailed the Alaed as it passed the Dutch coast, prompting the vessel to turn north. Alead is reportedly near the Hebrides archipelago off Scotland’s west coast, according to The Telegraph. Scottish site STV.TV says the vessel “was last recorded under way less than 55 miles off the coast of the Port of Ness village in the Isle of Lewis,” and headed for Vladivostock according to AIS information (possibly falsely inputted) provided by the ship tracking site marinetraffic.com. The vessel has since moved out of range.

Press reports indicate British Foreign Secretary William Hague has confirmed Alaed is returning to Russia, most likely Kaliningrad. Maritime experts speculate it was ordered to turn back by Russian authorities as it may have had enough fuel to reach Syria without stopping and not been subject to the EU’s ban on weapon shipments as a Russian vessel.

The Alaed is just the latest in a series of cargo vessels bound for a war zone suddenly thrust into the spotlight after reports surface of a purported arms shipment. The Kang Nam, a North Korean cargo vessel turned around in 2009 after the world’s attention focused on its voyage to a mystery destination (likely Myanmar) with a mystery cargo (likely small arms and RPGs). Similar incidents have occurred in the past with North Korean vessels such as 2011’s MV Light incident.

As with the Kang Nam, the objective of the international community in this incident is likely to deny the Alaed an ability to refuel in a friendly port of call enroute to its final destination. With the loss of insurance, the Alaed will find it difficult to legally enter many ports on the way to Syria and may be forced to turn around. If the vessel is able to continue, it runs a good risk of being boarded by some of Syria’s more proactive neighbors enforcing an EU arms embargo, such as Turkey, which boarded the German-owned Atlantic Cruiser in April after similar reports of on-board weapons. Embarrassingly for Turkey, such reports turned out to be false, so they might be more reluctant to repeat the episode with out definitive proof before hand. Nor are all suspect cargoes bound for the al-Assad regime. Also in April, Lebanon stopped the Sierra Leone-flagged Lutfallah II, which definitively was smuggling weapons for the Free Syria Army.

On a side note, it’s hard to take the interview at 1:55 with the U.S. Chairman of the Joint Chiefs of Staff completely seriously when you realize what’s immediately behind him. That’s right, a cupcake tank that fires cupcakes:

2 thoughts on “Alaed Stripped of Insurance”