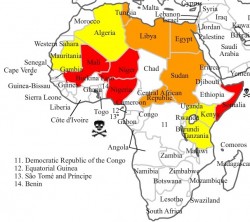 After the massacre at Westgate, many American media outlets acted as if they were only hearing Al-Shabaab’s name for the first time. This is only the tip of the US Medias Fifth-Estate-Failure iceberg. While incidents may be reported in part and parcel, the staggering scale of militant Islam goes disturbingly unreported. While many of these movements remain separate to a point, the  geographic and communicative proximity provided by globalization serves as a catalyst for a horrifying potential collective even more monstrous than anything we could imagine in Afghanistan.

ADM Stravridis pegged this problem squarely on the head when he brought up convergence, that globalization is merely a tool. What can be used for to organize communities and build stable growing economies can also help coordinate civilization’s detractors. To spread our gaze further than the recent events in Libya and Somalia, Boko Haram fights a war against the Nigerian government; this is spreading into Niger, Camaroon, and Chad through a porous border. Its militants have also been found in in Mali, where they fought and trained with both Movement for Oneness and Jihad in West Africa (MOJWA) and Al-Qaeda in the Islamic Maghreb(AQIM) (MOJWA’s former parent organization). There, they fight an open war with the government. MOJWA meanwhile is also fighting in Niger. In one case, even more  with al Mua’qi’oon Biddam in revenge for an AQIM leader killed by the French and Chadians in Mali. While the forces of globalization may allow nice things like the Star Alliance global airline network, it can also be harnessed to create this jihadist hydra.

Africa is critically important to future global security. Despite its great  economic growth, improving institutions, and growing innovation, the forces of terrorism so long reported “on the run” are growing and connecting at an alarming rate, even in places some thought secure. In such a vast countryside with at minimum half-dozen Afghanistan-sized poorly controlled areas, rolling back this development is of deadly importance. Maritime security, while not the primary arena, will help stay the spread of the lawless vacuum in which militancy thrives and help improve surrounding institutions to further minimize that vacuum ashore.

One thought on “African Navies Week: Al Shabaab Is Only the Beginning”