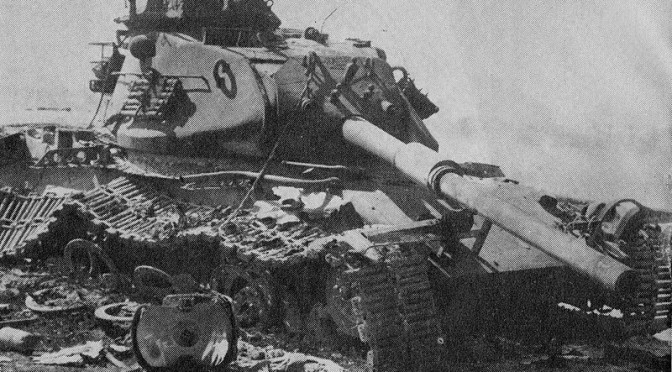 The threat posed by Anti-Access/Area-Denial (A2AD) capabilities is at the core of the the U.S. Navy and Air Force’s Air Sea Battle (ASB) operational concept.  However, A2AD weapons are not new,  in particular playing an important role in the 1973 Yom Kippur War.

A2AD and the ASB Concept

The ASB operational concept defines A2AD capabilities as “those which challenge and threaten the ability of U.S. and allied forces to both get to the fight and to fight effectively once there.”  One of the main capabilities that ASB has been established to counteract and mitigate against is the “new generation of cruise, ballistic, air-to-air, and surface-to-air missiles with improved range, accuracy, and lethality” that are increasingly available to states around the world.  Figuring out ways to operate in a world in which missiles are easy to acquire and operate is extremely important to the U.S. military, since A2AD weapons “make U.S. power projection increasingly risky, and in some cases prohibitive,” threatening the very foundation upon which the ability of the U.S. military’s ability to operate at will across the globe rests upon.

Missile Warfare in the Middle East

Using A2AD weapons, particularly surface-to-air missiles (SAM), surface-to-surface missiles (SSM), and anti-ship cruise missiles (ASCM), to conduct a form of asymmetric warfare is not a new idea.   In particular, the use of missiles to counteract an enemy’s superiority in the air or on the ground was very much a part of Soviet doctrine by the 1960s.  To protect against the U.S. air campaign during the Vietnam War, Soviet missiles and personnel were extensively used by North Vietnam.  Perhaps the best example of A2AD in action, however, was the Soviet-enabled missile campaign waged by Egypt against the Israeli military during the 1973 Yom Kippur War (also known as the Ramadan War or October War).

The use of missiles formed an essential part of the plans of Egypt and Syria to win back the territories lost so precipitously during the 1967 Six Day War.  In his book the Arab-Israel Wars, historian and former Israeli President Chaim Herzog noted that:

“the Egyptians had meanwhile studied and absorbed the lessons of the Six Day War: with the Russians, they concluded they could answer the problem of the Israeli Air Force over the battlefield by the creation of a very dense “wall” of missiles along the canal, denser even that that used in North Vietnam.  The problem posed by Israeli armour was to be answered by the creation of a large concentration of anti-tank weapons at every level, from the RPG shoulder-operated missile at platoon level up to the Sagger missiles with a range of some 3000 yards and the BRDM armoured missile-carrying vehicles at battalion and brigade level.”

As part of Operation Caucasus, the Soviet Union “deployed an overstrength division” of air defense forces, with eighteen battalions each composed of SAM batteries, Anti-Aircraft Artillery (AAA), and teams equipped with Man-Portable Air Defense Systems (MANPADS).  Although technically identified as instructors, the Soviet troops actually “were dressed in Egyptian uniforms and provided full crewing for the deployed SAM systems.” Using lessons learned in Vietnam, the air defense forces along the Suez Canal were capable of  “relocating frequently and setting up ambushes for Israeli aircraft using multiple mutually supporting batteries.”  Syria also procured Soviet SAM batteries to support their part of the planned surprise attack.  In Herzog’s words, the overwhelming array of SAMs and AAA “would provide an effective umbrella over the planned area of operations along the Suez Canal” and “to a very considerable degree neutralize the effects of Israeli air superiority over the immediate field of battle.”

The Egyptians pursued a similar effort in their efforts to combat Israel’s ground forces.  Per Herzog, Israel’s “armoured philosophy” emphasizing “massive, rapidly deployed, armoured counterattack” would be faced by an Egyptian Army that had crossed the Suez Canal “equipped to the saturation point in anti-tank weapons and missiles in order to wear down the Israeli armour.” The Arab leaders were not just concerned with achieving missile dominance inside the expected battlefield along the canal, however, but also that Eyptian and Syrian aircraft could not match their Israeli counterparts “outside the range of missile surface-to-air defence systems.”  Therefore, the Soviets also provided surface-to-surface FROG and SCUD missiles capable of directly striking at Israel itself, with the hope that they could deter against Israel’s ability to attack their own capitals.

Egypt and Syria’s employment of A2AD weapons had a significant tactical impact on the war.  Estimates of the losses of Israeli aircraft vary.  Herzog stated that 102 Israeli planes were shot down (50 during the first three days), with half shot down by missiles and the other half shot down by AAA.  According to other articles, “Israeli public claims are that 303 aircraft were lost in combat,” crediting SAMs with shooting down 40 and “between four and 12 to Arab fighters.”  This means that although most Israeli aircraft may have been shot down by AAA, the “missile wall” can be credited with “denying the use of high and medium altitude airspace, driving aircraft down into the envelope of high-density AAA.”

One can argue that the lessons learned from employment of A2AD in 1973 can be overstated (after all, Israel eventually won the war, at great cost).  However, Herzog’s claim that it was “a war of great historic significance” is merited, as it “was the first war in which the various types of missiles – surface-to-surface, surface-to-air, air-to-surface, and sea-to-sea – were used on a major scale,” and that “the entire science of military strategy and technique has had to be re-evaluated in the light of” its lessons.  In particular, the Egyptians in 1973 executed what the Air-Sea Battle concept identifies as an important objective of A2AD, in which “an aggressor can slow deployment of U.S. and allied forces to a theater, prevent coalition operations from desired theater locations, or force friendly forces to operate from disadvantageous longer distances.”

If the Army’s AirLand Battle doctrine of the 1970/1980s can be seen as an intellectual precursor to Air-Sea Battle in its emphasis on “degradation of rear echelon forces before they could engage allied forces,” then the link between the 1973 Yom Kippur War and Air-Sea Battle is clear.  General William DePuy was the first commander of the U.S. Army’s Training and Doctrine Command (TRADOC) upon its establishment in 1973.  In particular, “DePuy had taken an intense interest in the reform of tactics and training, in line with tactical lessons drawn from the 1973 Arab-Israeli War.”  During the tenure of DePuy’s successor, General Donn Starry, TRADOC formulated AirLand Battle and laid the doctrinal framework for the modernization of the U.S. Army and inter-service, joint operations.

What is the Answer?

How and why Israel won the war in 1973 entails a much longer discussion possible in this particular blog post.  The solution to A2AD that the Navy and Air Force  have proposed through Air-Sea Battle “is to develop networked, integrated forces capable of attack-in-depth to disrupt, destroy and defeat adversary forces.”  The reader can decide whether those are just buzzwords and whether the A2AD threat faced by the Israelis forty years ago was an easier challenge to  overcome than what could be faced by the U.S. military today and in the future  What is clear, however, is that the notion of A2AD is not new, and was very much an important part of Soviet-supported military operations during the Cold War.