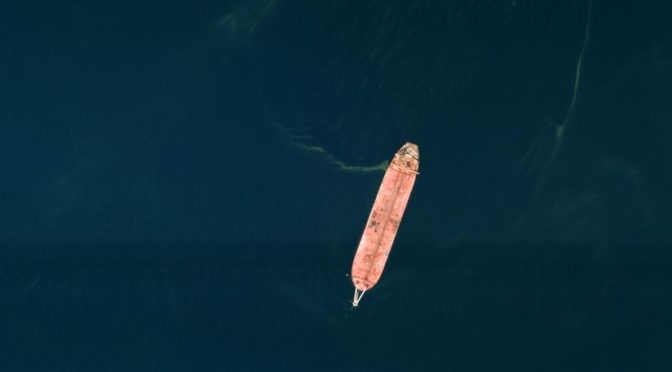 Over the past five years, the people of Yemen have endured famine and warfare. Now, as they and their Red Sea neighbors face the imminent likelihood of overwhelming oil spillage from the abandoned tanker FSO Safer, the means to avert a regional catastrophe may be stripped away.

It has been reported that Secretary of State Mike Pompeo is about to designate Yemen’s Ansar Allah movement, better known as the Houthis, as a Foreign Terrorist Organization (FTO). Doing so will not only complicate prospects of peace in Yemen, but potentially catalyze one of the worst humanitarian and environmental disasters in modern history.

For two and a half years, we have led a team of experts in a range of fields, working pro bono, to game out and highlight the threat of the Safer while also proposing achievable approaches to reducing or eliminating that threat. The Safer is a rapidly deteriorating tanker that, before the Yemeni civil war, served as the export terminal of the country’s main crude oil pipeline. Permanently moored less than five miles off the Red Sea coast of Yemen with a cargo of 1.14 million barrels of oil, the vessel is linked with an undersea pipeline that holds nearly as much crude as the Safer itself. As the tanker has deteriorated, the threat of a catastrophic spill – four times the size of the Exxon Valdez spill – has only increased. A burst pipe in the engine room in July was only one of many signs that the 45-year old Safer is not going to hold together much longer. Not only is the vessel owned by SEPOC, a state-owned company of the Hadi Government – effectively trapped in Houthi-controlled territory, but for the past six months, armed Houthi militants have been stationed onboard the vessel, which is being kept intact by a resourceful skeleton crew of SEPOC personnel.

Just this summer, at a special session of the U.N. Security Council regarding the FSO Safer, U.S. Ambassador to the UN Kelly Craft cited our work while urging resolution of the danger posed by the tanker. In recent months, we have been making steady progress toward a two-phase option: first to install devices in the area to contain a spill, and then to replace the dying tanker and transfer its cargo to a new, seaworthy vessel. Designating the Houthis as an FTO would close off avenues for negotiation with those who control access to the tanker, and thus end any hope for either of those measures. Time is our enemy, as the tanker is rapidly deteriorating and will, at some point, break apart.

While the Houthis have recently signed an agreement to allow a United Nations inspection team on the vessel, it will still take months before such an inspection could actually occur, and by that point, it may be too late. Furthermore, this is not the first time permission has been granted. Past reversals by the Houthis raise the question of whether that permission will still be in place when an inspection team is ready to board. And even then, an assessment is just the first step. The FTO designation would only diminish the chance of this long and arduous process of having any meaningful impact.

A spill of the Safer’s cargo could mean the destruction of Red Sea fisheries vital to human security in the region, as well as irreversible damage to the only coral reef systems known to be able to withstand warming seas. The consequences on land are no less extreme, beginning with the devastating impact of a spill from the Safer on water security. Millions of inhabitants of Yemen, Saudi Arabia, and other nearby states, including Egypt and Sudan, get their drinking water from desalination plants along the Red Sea coast. If oil contaminates those plants as it spreads along the coast, the remaining supply of drinking water will last only days. Even in the best of times, that is not enough time to mobilize a major humanitarian relief effort to make up the shortfall. Now, in the face of conflict, famine, and the likelihood that a spill would constrict (and in some places, close off) shipping, such an undertaking would require far more time, coordination, and ingenuity. There would be no realistic chance of avoiding a calamity.

Yemen is already at risk of losing an entire generation to famine. Roughly 80 percent of the aid for Yemen’s starving population comes through Hodeidah. Even a temporary closure of the city’s port due to the toxicity from a spill would increase the death toll.

Even on purely economic grounds, the Safer could cause long-term harm to the region and to key U.S. allies. The Red Sea is narrow and semi-enclosed, and seasonal currents and winds will alternately spread the oil southward toward the Horn of Africa and northward toward Israel, Jordan, and the Egyptian Sinai Peninsula. With oily water up and down the coast, devastating coral reefs and islands, and decimating fish and wildlife populations, the Safer’s spill could ruin coastal tourism for Israel, Jordan, Egypt, Saudi Arabia, Sudan, Eritrea, and Djibouti for years to come.

In light of this predictable and preventable scenario, there should logically be a highly compelling set of foreign policy benefits deriving from the FTO designation that would offset the huge risks of designating the group that controls much of Yemen and the FSO Safer. The benefits should outweigh the costs, but in this case they do not. We see great risk to the critical operational work we now have underway to head off a humanitarian and environmental disaster of massive scale. For anyone attempting to provide aid to Yemenis in Houthi territory, the designation would add layers of difficulty and risk, and at tremendous human cost. Beyond that, our experience leads us to conclude that designation would do nothing to pressure the Houthis. On the contrary, it would let them further off the hook in terms of their responsibility for governance writ large and for this issue in particular which impacts so many countries in the Red Sea region.

Some may argue that a U.S. move would simply replicate the Saudi government’s own designation of Ansar Allah as a terrorist organization, establishing a united front. In reality the Saudis operate by their own rules and are still negotiating with the Houthis regardless. Such engagement would be barred for the U.S. government, or other U.S.-linked entities, and virtually impossible for a range of international actors, including private sector experts like us.

In the years leading up to the disastrous port explosion in Beirut on August 4, 2020, customs officials and international experts warned Lebanese authorities about the possibility and were ignored. In the same way, the demise of the Safer and the fallout of that event are eminently foreseeable and will almost certainly have an impact far wider and more extreme than the Beirut blast.

Designating the Houthis as an FTO may look and feel like an assertive, decisive application of pressure. In concrete reality, its practical consequences would be dire, not only for Yemenis, their neighbors, and the critical natural infrastructure of the Red Sea, but also for U.S. credibility on the global stage. We strongly encourage the Secretary of State to reconsider imposing this designation.

Dr. Ian Ralby is a maritime law and security expert and is CEO of I.R. Consilium, a family firm specializing in maritime and resource security. He spent three years as a Maritime Crime Expert for UNODC and four years at the Africa Center for Strategic Studies.

Dr. David Soud is an expert in resource crimes and is Head of Research & Analysis of I.R. Consilium.

Rohini Ralby is an expert in strategy and problem solving and is Managing Director of I.R. Consilium.

Featured Image: A satellite image of the FSO Safer taken by Planet Labs on September 14, 2020. (via Forbes)