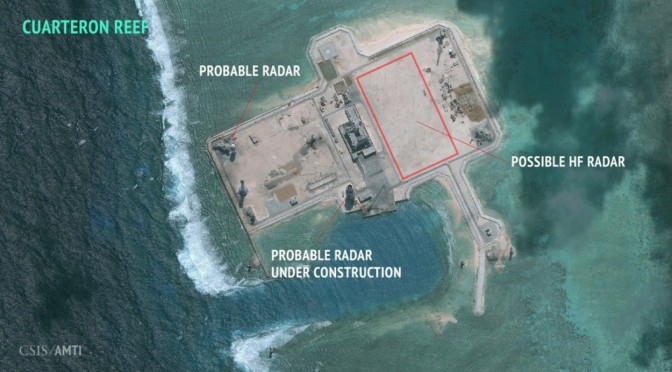 Welcome to part two of the February 2016 members’ roundup. Over the past month CIMSEC members have examined several international maritime security issues, including a rapid increase in naval modernization in the Indian Ocean, China’s recent South China Sea military deployments, challenges within the U.S. defense acquisition program and the evolving China-Taiwan political and security relationship in East Asia.

Beginning the roundup at Popular Mechanics, Kyle Mizokami discusses the U.S. Navy’s interests in the Long Range Anti-Ship Missile (LRASM) and the importance of acquiring the weapon system quickly. Mr. Mizokami explains that the increasing threat of modernized surface fleets with advanced weapon systems, particularly from Russia and China, requires the U.S. Navy to deploy a weapon more capable than the current U.S. Anti-Ship Missile (ASM) – the Harpoon missile. He also outlines technical features of the missile, including its use of Artificial Intelligence, data links, an ability to avoid static threats by use of fluid way points and the platforms that can deploy the weapon system – currently the F/A-18E/F Super Hornet, F-35C, B1 and the U.S. Navy’s standardized Mk.41 Missile Silo.

Bryan Clark, for the Center for Strategic and Budgetary Assessments, explains that the U.S. Military’s defense requirements need to be balanced with realistic and appropriate budgets and schedules. He highlights that since 1970 major DoD Defense Acquisition Programs have increased in cost from 20-60 percent while new weapon systems are on average fielded 20 percent later than originally planned. Mr. Clark suggests that eliminating overly ambitious requirements for new capabilities is key to reducing acquisition malpractice while the limitations of competition within the defense industry need to be understood to allow for DoD’s buying power to improve.

Entering the Asia-Pacific, Harry Kazianis for The National Interest explains that Washington’s FONOPs in the South China Sea are not intended to halt Chinese dominance in the region, but rather to defend freedom of navigation and maritime legal principles. Mr. Kazianis highlights that regardless of the intent of the operations, China has remained firm on its artificial island construction and militarization in addition to strengthening its security apparatus in the region. This has been evident with the deployment of the HQ-9 air-defense system atop the newly constructed islands and the drastic increase in PLA-N deployments in the region. In a second article at The National Interest, Mr. Kazianis identifies the possibility that China may deploy several of its 24 recently purchased Russian Su-35 fighters to the airfields that have been constructed on these same islands.

Lauren Dickey, for The Council on Foreign Relations, provides the perspective that China’s recent deployment of surface-to-air missile launchers and radar systems to the contested Woody Island not only represents China’s ambitions for challenging U.S. regional presence but also to forward a broader agenda of modernizing the capabilities of the PLA. Ms. Dickey also highlights President Xi’s planned reforms for the PLA likely to result in a leaner, stronger fighting force, an enhanced power projection capability and an increased ability to deter threats along the country’s periphery.

Michal Thim, for The Diplomat, discusses the recent meeting between foreign affairs officials from both the Chinese and Taiwanese government. Mr. Thim explains that these representatives have met before in other unofficial non-governmental forums, but this meeting represents the first time in six decades that officials from the two governments have met in their official capacities. He also notes that although this meeting may reflect a positive change in the dynamic of China-Taiwan relations, significant security tensions still exist between the two countries with the Taiwan Strait missile crisis still fresh in-mind and current Chinese missile deployments near the Taiwan theatre threatening Taiwanese regional defense posture.

To conclude the roundup, Vijay Sakhuja for Nikkei Asian Review discusses the high-tech naval buildup in the Indian Ocean from a regional perspective, focusing on India, Pakistan, Iran, South Africa, Australia and Indonesia. Mr. Sakhuja notes that these powers have been supporting diplomatic multilateral institutions, such as the Indian Rim Association and the Indian Ocean Naval Symposium, to jointly address piracy concerns and to train for potential mine countermeasure operations.

Members at CIMSEC were also active elsewhere during the second part of February:

CIMSEC has also recently published a compendium discussing a range of strategies, challenges and policy options concerning Distributed Lethality. You can find a download link for all of the articles here.