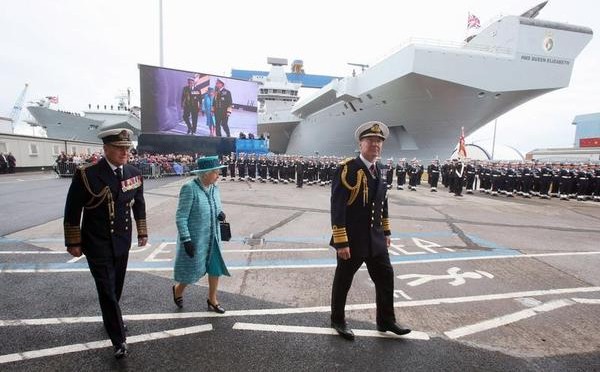 This article originally appeared on RealClearDefense. It can be read in its original form here.

The United Kingdom’s new national security document – the Strategic Defence and Security Review 2015 (SDSR 2015) – was released to much fanfare. This document has been generally well received in the defense community with most analysts believing that the review’s proposed changes would profoundly boost Britain’s military capabilities in the coming years.

Among SDSR 2015’s myriad initiatives, particularly eye-catching is the reiteration by London to have a two-carrier fleet comprising HMS Queen Elizabeth and sister ship Prince of Wales. Paralleled to this is the decision to acquire 138 F-35B Lightning II Vertical/Short Take-Off and Landing (VSTOL) strike fighters over the life of the aircraft program.

Various defense commentators have lauded these measures, arguing that Britain is now on its way to becoming a traditional aircraft-carrier nation again with the F-35B operating from the Queen Elizabeths. To illustrate, Philip Radford writes at The Strategist that the Royal Navy (RN) would soon have a “viable, independent, strike-carrier capability”. Similarly, a War On The Rocks piece by Matt Schnappauf speaks of the U.K. obtaining the ability to “deliver hard power through traditional carrier strike and maneuver missions.”

Would this really be the case? Arguably not during the first few years of the two British flat-tops’ projected 50-year service life. This is because their primary striking force – the F-35B complement – is likely to be considerably under-strength during their early years.

The raison d’etre of the aircraft carrier is its air wing, and the latter’s size and composition dictate the kind of operations the ship can carry out. A major doctrinal role for the flat-top is to project power and being able to carry out offensive missions is therefore essential for the vessel. Being a capital platform, however, the protection of the carrier is of utmost importance to its commanders, and a good portion of the ship’s air wing will invariably be dedicated to fleet air defense.

The onus is thus on the carrier task force leadership to maintain a judicious balance between defense and offense. Having a sizeable air wing on the carrier would certainly facilitate this endeavor, but this is not something the Queen Elizabeth-class vessels will have up till the year 2023 and maybe even beyond.

This is because although the new British carriers can each deploy up to 36 F-35Bs as part of its Tailored Air Group, a fraction of that figure is likely to be the norm during the ships’ fledging service period as there will not be enough of the aircraft to go around initially. Indeed, while theQueen Elizabeth and Prince of Wales are slated to be commissioned in 2017 and 2020 respectively, only 42 F-35Bs (24 for carrier deployment, 18 for training) will be in service by 2023 when both vessels and the F-35B are expected to reach full operational capability.

As Chancellor of the Exchequer George Osborne declared a day before the release of SDSR 2015: “We are going to make sure that when these aircraft carriers are available, they are going to have planes that can fly from them in force (emphasis added)… By 2023, we will be able to have 24 of these jets (F-35Bs)… on the decks of these carriers.”

That being said, it is not entirely clear exactly how many F-35Bs each flat-top will operate. Using the figure provided by the Chancellor, 24 of the aircraft for carrier duty works out to a measly 12 per ship, prima facie. As a matter of fact, various media outlets have reported that the carrier will routinely deploy with only a dozen of the aircraft. However, one informed source states that 15-20 F-35Bs will make up one squadron, of which there will be two. Given that one carrier and its constituents will be at sea at any one time while the other in port for refitting and crew rest, this means that each flat-top is likely to deploy with only one Lightning squadron.

A tactical combat aircraft complement of 12, or even 15-20, is rather small for traditional carrier operations, especially force-projection ones that are likely to predominate considering the SDSR’s expeditionary-warfare slant. Indeed, it is worth considering the fact that the two British small-deck carriers involved in the Falklands War carried 20-odd Harrier jump jets each, and they were about three times smaller than the Queen Elizabeth-class ships.

In fact, each new carrier might even be operating with a much fighter complement fewer than 15-20 in the years leading up to 2023, giving lie to the phrase “in force” used by George Osborne when he spoke of equipping the carriers with significant airpower.

In any case, the small fighter constituent means that if the Queen Elizabeth carrier were to get involved in a conflict with an adversary with credible anti-access/area-denial (A2/AD) capabilities, the vessel would be hard-pressed to protect itself, let alone project power. With a displacement of over 70,000 tons and costing over three billion pounds each, the new British carriers will be the crown jewels of the Royal Navy; indeed, HMS Queen Elizabeth is slated to be the RN’s flagship when she comes into service. The protection of the ship would hence be of paramount importance in an era that has witnessed the proliferation of A2/AD capabilities even to developing nations. Hence for a Queen Elizabeth carrying 20 or less Lightnings in such circumstances, it remains to be seen just how many of the aircraft will be earmarked for different duties.

Should a F-35B air group of that size put to sea, at least half of them will be assigned to the Combat Air Patrol (CAP), leaving barely 10 for offensive duties. It is worth noting that of the 42 Harrier VSTOL jets deployed on HMS Hermes and HMS Invincible during the Falklands War, 28 of them – a substantial two-thirds – had CAP as their primary duty. It is also telling that of the 1,300-odd sorties flown in all by the Harriers, about 83 per cent of them were for CAP.

Faced with modern A2/AD systems such as stand-off anti-ship missiles, how likely then would the carrier task force commander devote more resources to offense and risk having a vessel named after British royalty attacked and hit? Having said that, having too many planes for defense strengthens the argument made by various carrier critics that the ship is a “self-licking ice cream cone,” in other words, an entity that exists solely to sustain itself.

The task force commander would thus be caught between a rock and a hard place. Allocate more F-35Bs to strike missions and the susceptibility of the task force to aerial threats increase. Conversely, set aside more aircraft for the CAP and its mother ship’s ability to project power decreases. All in all, with a significantly understrength F-35B air wing, the Queen Elizabethflat-top would be operating under severe constraints, making it incapable of the traditional carrier operations it could have carried out with a larger tactical aircraft complement. Indeed, one naval commentator is right on the mark when he argues that two squadrons with a total of 24 aircraft should be a “sensible minimum standard” for each carrier.

A counter-argument can be posited that the F-35Bs of the United States Marine Corps (USMC) could deploy off the Queen Elizabeth carriers, and this will surely augment their air groups. Indeed, USNI News reported last September that such an arrangement is in the works. A similar counter-argument can also be made that the British carriers will invariably be operating in the company of the U.S. Navy and its supercarriers, rendering the need for a full-size air group not as pressing. While valid, these two contentions ignore the fact that American assets would only operate together with the Queen Elizabeth carriers during joint operations agreed to by both London and Washington.

Another counter-argument can be made that the two British flat-tops can operate together once Prince of Wales is commissioned, thus doubling the combat airpower of the carrier task force. This argument is flawed as it does not consider the fact that aircraft carriers are highly complex systems that need regular and lengthy refits. As such, when both Queen Elizabeths are in service, one is likely to be at sea while the other is in port undergoing maintenance, as mentioned earlier. Even if both ships happen to be sea-worthy at the same time, operating the two together, however, means that Britain would not be able to maintain the continuous at-sea carrier presence crucial to protecting its far-flung global interests.

A different counter-argument can be put forth that aircraft and crew from the 18 training F-35Bs, or even the other carrier, could be “surged” in extremis to the active-duty carrier. This assertion is seemingly more watertight, but it is not certain exactly how many of the aircraft and the requisite personnel to operate and maintain them would be available for redeployment to the flat-top at sea. As an article on the Navy Matters blog argues cogently along these lines:

“Those who might suggest that the a dozen aircraft are just fine for routine operations and that the rest of the aircraft can be instantly surged are just not seeing reality. The F-35 is not a WWI powered kite that can be piloted by someone with a few hours training and maintained by any mechanic with a pipe wrench. Surging F-35s may take weeks or months and a carrier caught in a moment’s notice conflict will be severely limited in its capabilities.”

Even if a considerable number of Lightnings and their requisite crew could be surged to the active-duty carrier on relatively short notice, it remains to be seen how effectively the augmented air wing could be utilized. As the aforementioned Navy Matters piece maintains perceptively, the transition from operating a dozen or so aircraft to 30-40 of them is unlikely to be seamless for the carrier; in addition, “(l)earning on the fly on a carrier is a recipe for disaster.”

Rounding up, the Strategic Defense and Security Review 2015 promises much for Britain in terms of aircraft carrier capability. While the document seeks to re-instate the U.K. as a traditional carrier power, it is still early days to proclaim that this will be a reality like what some have maintained. This is especially so considering the fact that the Queen Elizabeth flat-tops will be operating with a significantly reduced tactical aircraft complement till at least 2023. Of course, if the size of the British carrier’s F-35B complement could be increased, ideally closer to its full strength of 36, more possibilities will definitely open up for the Royal Navy with regard to its carrier capabilities.

Then again, this is contingent on the availability of financial resources in the years to come. This is especially crucial in view of the fact that various British naval programmers have been truncated or even completely shelved due to austerity. Think the Type 45 destroyer and the Cooperative Engagement Capability initiatives. In fact, HMS Prince of Wales was conceived at one stage to handle more capable catapult-launched aircraft, but prohibitive costs put paid to this idea.

That being said, if there is one thing that could ameliorate any fiscal problems that may arise in the future, it would be political will. Would Whitehall muster the political will needed to see the F-35B project through to its entirety? This is an issue that the defense community will certainly keep tabs on in the years to come.

Ben Ho Wan Beng is a Senior Analyst with the Military Studies Programme at Singapore’s S. Rajaratnam School of International Studies, and he received his master’s degree in strategic studies from the same institution. Ben’s main research interest is in naval affairs, and his works in this area have been published inBreaking Defense, The Diplomat, War Is Boring, as well as the Center for International Maritime Security’sNextWar blog. He can be reached at iswbho@ntu.edu.sg.

4 thoughts on “Would Britain Really be Back as a Traditional Carrier Power?”