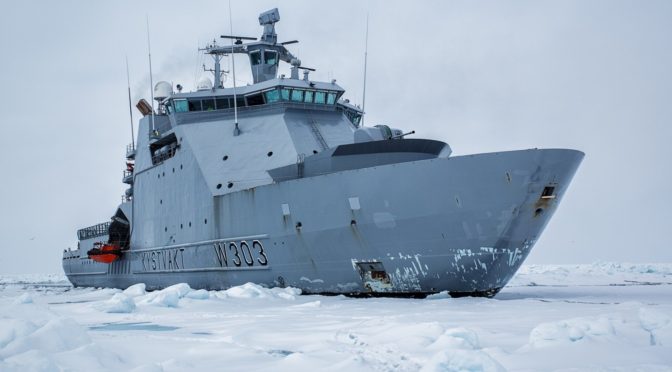 Since the Cold War, the U.S. has maintained a steady presence in the Arctic—specifically the European Arctic, or High North—primarily through nuclear submarine deployments while relying on NATO allies in the region for logistical support. However, melting ice caps, an increase in commercial maritime activity, and ongoing territorial disputes necessitate stronger NATO cooperation in the region to achieve a deterrence posture against Russia and safeguard maritime security. Deterring Russian aggression is important in all European bodies of water, and the Arctic will increasingly face the same maritime security issues as other parts of the world, including illegal, unreported, and unregulated (IUU) fishing by China and the movement of migrants and refugees by sea.

The Arctic has reemerged as a front for NATO in recent years, as Russia has ignored European policies not to militarize the region. Since at least 2010, Russia has been reopening and rearming much of the Arctic infrastructure used at the height of the Soviet Union. In 2012, Russia resumed its patrol of the Northern Sea Route (NSR), a commercial shipping lane running along Russia’s northern coastline from the Kara Sea to the Bering Strait. In 2014, Russia established a new joint strategic command in Severomorsk to oversee its Northern Fleet with renewed focus on the Arctic. And in 2019, following the first successful navigation of the NSR without icebreakers two years prior, Russia implemented mandatory pilotage for foreign vessels and demonstrated its maritime interdiction capabilities.

Similar to Russia, NATO needs to improve its capability and capacity to operate on the Arctic front. In order to deter the Russian threat and safeguard maritime security, sustained presence in the region is needed. To this end, NATO should create a new standing maritime group dedicated to the Arctic and separate from the maritime groups focused elsewhere. While likely to be hotly debated, a new standing maritime group should gain traction among many of the Arctic states, especially Iceland, Norway, and Denmark, who have long recognized the growing Russian threat in the region. With sustained presence, so too will come sustained situational awareness, which is fundamental for conducting successful operations.

Currently, NATO’s maritime component commander, HQ Allied Maritime Command (MARCOM), maintains operational control of NATO’s four standing maritime groups: two destroyer/frigate groups and two mine countermeasures groups. These groups are already overtasked, posturing against a resurgent Russian Navy across the North Atlantic, Baltic, and Black Seas, and lending support to NATO’s maritime security operation in the Mediterranean, Operation Sea Guardian, as well as the EU refugee and migrant crisis. Regardless of these ongoing tasks, these groups are not tailored for Arctic naval operations. For this reason, a new group needs to be formed.

Instead of relying exclusively on frigates and destroyers from NATO navies to form the new group, NATO should look to its coast guards as well, recognizing that many of these forces field ships that are optimized for Arctic operations. The U.S., Canada, Denmark (via Greenland), Iceland, and Norway all have Arctic maritime borders, and most have ice-class ships. Denmark has Thetis-class and Knud Rasmussen-class patrol vessels, the latter of which double as icebreakers. Norway has the patrol vessel Svalbard, which also doubles as an icebreaker and recently completed the first Norwegian voyage to the North Pole. Three new patrol vessels will soon join her. Iceland, too, can lend support with their aging but capable Ægir-class or newer Thor-class patrol vessels. Thor is not capable of icebreaking, but it can still operate in the Arctic.

Of course, these examples are just from the smaller NATO navies and coast guards of the Arctic; the U.S. and Canada would have a responsibility to support the group as well. U.S. Arleigh Burke-class destroyers can operate in the Arctic, as recently demonstrated, and where capabilities are lacking, the NATO Defense Planning Process should abide. NATO partners Sweden and Finland have land borders in the Arctic region and would likely contribute to the group, if not with tangible patrol and surveillance assets, then with information exchange. Beyond historical cooperation with NATO states through agreements such as NORDEFCO, Sweden and Finland have increased cooperation with NATO in recent years, joining the UK’s Joint Expeditionary Force (JEF), improving on existing agreements with the U.S., and participating in NATO exercises in the Baltic Sea.

Concerns over whether or not FONOPS in the Arctic would do more harm than good are valid, but these concerns are mostly due to the U.S. Navy’s current lack of capability and capacity in the region, which the new standing maritime group would help address. Nevertheless, objections to FONOPS in the Arctic, especially NATO-led, are still likely to be made for fear of escalation with Russia. However, even if Russia were to cite a NATO FONOP, it does not require one to justify its continued aggression, nor did it require one in Georgia in 2009 or in Ukraine in 2014 and 2018. Russia justifies its aggression because of NATO’s continued expansion into once Soviet territory, something which George Kennan, the architect of the Cold War containment strategy, predicted. Russia is going to act regardless of NATO conducting FONOPS.

With this tension between NATO and Russia in mind, some believe a military “code of conduct” is needed for the Arctic. While the recommendation for the deployment of a standing maritime group to the region may appear hardline in contrast, such a group would operate professionally alongside Russian units, as is already done by the other maritime groups. Moreover, such a group would be part of NATO’s increasing role in Arctic maritime security. From assisting with search and rescue operations to helping deter illegal/illicit activity ranging from IUU fishing to trafficking in persons or goods, NATO’s role in the region would be two-fold: deter Russia while safeguarding maritime security. Neither role precludes a code of conduct for the region, and the latter presents an opportunity for de-escalation and possibly even a measure of cooperation with Russia.

Another potential outcome of NATO’s sustained presence and situational awareness in the Arctic is a better deterrence posture against China. China, declaring itself a “near-Arctic” state and achieving observer status on the Arctic Council, is increasingly becoming a player in the region. While for now most of the play has been economic, investing large sums in Arctic states—including NATO allies—and adding the Arctic to its Belt and Road Initiative (Polar Silk Road), it can be assumed that its economic investment in the region will eventually be followed by militarization.

How China might move to militarize the Arctic is anyone’s guess, but its 2018 white paper on the Arctic, as summarized by Lieutenant Commander Rachel Gosnell, USN, clearly states China’s interests in the region, and it has plans to protect them. While much of the paper touts adherence to international law, the world has very little reason to believe China will do so. One example of how China could move to militarize the Arctic is on the back of its seemingly benign fishing fleet. China has stated it has inherent rights to the fish migrating to the Arctic because of its large population. And where China’s fishing fleet goes, militarization will soon follow, as has been demonstrated already by Chinese fishing “militias.”

NATO’s sustained presence and situational awareness are needed to achieve deterrence against both Russia and China while safeguarding maritime security in the Arctic. The first step toward achieving this goal is to increase NATO capability and capacity to operate in the region, centered on a new standing maritime group that is dedicated to the Arctic and separate from NATO’s maritime groups operating elsewhere. This group should be formed by NATO states with Arctic maritime borders and ice-class ships. As NATO becomes the recognized authority for maritime security in the region, de-escalation and even cooperation with Russia could be possible. It is time for NATO to invest in this future, starting with a standing maritime group for the Arctic.

Lieutenant Barnard is serving as a staff operations and plans officer at NATO Maritime Command in Northwood, U.K. He was previously gunnery officer onboard USS Arleigh Burke (DDG-51) and weapons officer onboard USS Firebolt (PC-10), and was recently selected to be a foreign area officer in Europe. He graduated from the University of St. Andrews in Scotland with a master’s in terrorism studies and holds a bachelor’s in political science from Abilene Christian University in Texas. His views are his own and do not necessarily represent the views of the U.S. Navy, the U.S. Department of Defense, or NATO.