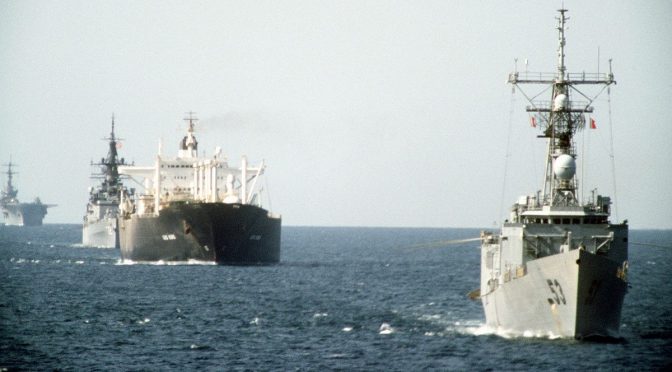 What distinguishes navies from that of other branches of the military is that their raison d’etre is often inherently economical in nature. Navies primarily exist to protects one’s sea lines of communications (SLOCs) in trade and natural resources, while threatening those of your enemy’s in times of war. As the classical seapower theorist Mahan would memorably argue, “the necessity of a navy springs from the existence of peaceful shipping and disappears with it.”1 In today’s globalized world, where 90 percent of global trade is still transported through merchant shipping, ensuring that freedom of navigation is protected on the world’s waters has become more vital than ever for ensuring global economic growth and regional stability.

This is especially relevant when discussing the stability of global energy markets. A 2014 report by the U.S. Energy Information Administration (EIA) entitled “World Oil Transit Chokepoints” noted that in 2013 total petroleum and other liquids production was 90.1 million barrels per day (bb/d), with over 63 percent of that amount transported through seaborne trade. Statistics from the United Nations Conference on Trade and Development noted that in 2013 oil tankers accounted for 30 percent of total worldwide shipping by deadweight tonnage. Any disruption to those transport routes, even briefly, would lead to “substantial increases in total energy costs and world energy prices.” These dangers of disruption are especially acute in so-called “maritime chokepoints,” described by the EIA as “narrow channels along widely used global sea routes.”2

The Middle East, specifically the Arabian Gulf, continues to remain one of the key players in world energy markets. The Gulf accounted for 32 percent of the world market share in oil production in 2015,3 with total crude oil exports from the region estimated at 17 million barrels per day.4 As well, the Middle East accounted for 17 percent of the market share in world natural gas production in 2015, with total production estimated at 164, 504.9 million cubic meters.5 The global trade in crude oil and natural gas increased by 1.5 percent and 0.3 percent respectively from 2014 to 2015.6

Thus, those interested in ensuring the stability of seaborne energy transportation coming out of the Middle East have turned a wary eye to two of the most important maritime chokepoints in the region. The first is the Strait of Hormuz, which connects the Persian Gulf with the Gulf of Oman and the Arabian Sea. The second is the Bab el-Mandeb, a chokepoint 18 miles wide at its narrowest, and which connects the Red Sea to the Gulf of Aden and the Arabian Sea.7

Both chokepoints are vital for oil and LNG (liquefied natural gas) shipments making their way from the Middle East to the hungry markets of the Asia-Pacific and Europe. Unfortunately, both also suffer from geopolitically tense littorals, driven primarily by the present rivalry between the U.S.-backed Gulf Arab states and the Islamic Republic of Iran. It is this very rivalry that drives present day concerns among security pundits and observers in the energy industry over freedom of navigation in these two vital maritime chokepoints.

Although most strategists have sought to view the GCC-Iranian geopolitical rivalry through the prism of landpower (focusing on Syria, Iraq, Lebanon, etc.), the maritime dimensions of this rivalry are no less important, as global energy prices (and therefore the health of our still fragile world economy) are threatened by the possible disruption of tanker shipping through both chokepoints. This two-part series will analyze maritime security and the threats to energy shipments through the Strait of Hormuz. The first part will discuss the strategic significance of the Strait of Hormuz, the makeup of Iranian forces, and the Strait’s recent history of war at sea. Part 2 will assess the feasibility of Iran’s asymmetric strategy to shut down shipping through the area in times of crisis.

The Strait of Hormuz is one of the most important maritime chokepoints in the world when discussing the security of global energy transportation. At its narrowest, the Strait is only 21 miles wide, with an official two mile shipping lane recognized by the International Maritime Organization to protect shipping coming through. Its northern shores comprise the Islamic Republic of Iran, while Oman and the UAE comprise its southern littorals. In 2013, an estimated 17 million barrels per day were shipped through the Strait, comprising almost 30 percent of total global oil seaborne trade for that year. The EIA noted: “The Strait of Hormuz is deep and wide enough to handle the world’s largest crude oil tankers, with about two-thirds of oil shipments carried by tankers in excess of 150,000 deadweight tons.”8 The GCC states, bar Oman, are heavily dependent on the Strait for their energy exports, the bulk of which are shipped to the growing and energy-hungry markets of the Asia-Pacific.9

Understanding the military imbalance between Iran and the Gulf Arab states can shed light on Iran’s asymmetrical maritime doctrine. Collective GCC defense spending and conventional capabilities currently dwarfs that of the Islamic Republic due to international sanctions, which also prevent the regime from modernizing its military through procuring modern armaments.10 According to a CSIS report, the total defense spending for 2015 for the GCC stood at $117.23 billion, while Iran stood at $15.9 billion. This military imbalance can be gleamed most glaringly through comparing their respective naval capabilities. Iran’s conventional blue water navy, the Islamic Republic of Iran Navy (IRIN), would stand little chance in a fleet-to-fleet engagement with either the U.S. Navy or the navies of the GCC (the latter certainly possesses modern surface ships), composed as it is of mostly aging frigates and corvettes from the Shah era.11,12

Instead, Iran has strategically chosen to adopt an asymmetric maritime doctrine to both deter its enemies and, if necessary, fight a protracted war within the Strait. Their doctrine is predicated on the use of submarines (Iran is currently the only Gulf sea power to possess submarines), mines, anti-ship cruise missiles (ASCMs), and small fast-attack boats. These capabilities are currently shared between the IRIN and the Iranian Revolutionary Guard Corps Navy (IRGCN), the naval arm of the powerful Revolutionary Guard Corps (or Sepah), set up by Ayatollah Khomeini shortly after the Revolution as a dependable force which would protect the regime from internal and external threats. The IRGCN operates as a brown water, coastal defense force whose area of responsibility (AOR) is the Persian Gulf, while the IRIN operates as a more conventional, blue water fleet whose AOR includes the Gulf of Oman, the Caspian Sea, and the Gulf of Aden, and who are employed for a wider range of tasks including anti-piracy operations and naval diplomacy. Responsibility for the Strait of Hormuz is shared between both services.13

Iran’s strategy of fighting a guerilla war at sea is heavily influenced by their experiences during the 1980-1988 Iran-Iraq War, particularly the so-called “Tanker War,” in which both belligerents attempted to financially exhaust the other through attacks on their oil tankers. Iran sought to attack the tankers of the Gulf states, who were the primary financial backers of Saddam’s Iraq. By the end of the war, Iran had attacked 190 ships from 31 nations, killing at least 63 sailors, using mainly asymmetric tactics to damage tanker shipping within the Gulf. Iran’s only attempt at a fleet-on-fleet engagement was during the U.S.-launched Operation Praying Mantis in 1988. Launched in retaliation for the damage sustained by the USS Samuel B. Roberts by an Iranian mine, the operation saw Iran lose two oil platforms as well as five ships, including the frigate Sahand. Another frigate, the Sabalan, suffered extensive damage. Iran learnt from its experiences during the war that while directly engaging the U.S. Navy had been disastrous, its asymmetrical strategy had been relatively more successful.14

Iran’s maritime strategy within the Strait is therefore predicated on using asymmetrical warfare to deter its enemies from harming Iran, increase its leverage diplomatically over its rivals, as well as fight a protracted maritime guerilla war if necessary. Their doctrine revolves around using speed, mobility, survivability, surprise, and exploiting the geography of the Strait and Persian Gulf to harass and destroy enemy warships and commercial shipping, the latter of which would have huge ramifications for the global economy, thereby pressuring the international community to intervene.15 It would also have a direct impact on the economies of the GCC, who almost entirely depend on regular access through the Straits to sustain economic growth. Any disruption to this growth would have serious internal stability implications, as the absolute monarchies of the GCC states were only able to cling to power throughout the turbulent Arab Spring of 2010 by exploiting their oil wealth for social development and job creation.

The ability to bypass the Strait is currently limited, with only Saudi Arabia and the UAE possessing pipelines able to bypass the Persian Gulf entirely. The Saudis possess the 746-mile Petroline, able to carry oil from its western refineries to its Red Sea port of Yanbu. The United Arab Emirates operate the Abu Dhabi Crude Oil Pipeline, which is able to carry half of the country’s total net oil exports to its port of Fujairah in the Gulf of Oman. The total unused capacity of both countries at the end of 2013 was estimated at 4.3 million bbl/d.16 However, it should be noted that utilizing the land pipelines to bypass the Straits has been referred to as “costly, inconvenient, and a remedy of limited scope.”17 For the time being, the economic and political survival of the Gulf states, and that of the larger energy market, is predicated on ensuring continued access through the Straits of Hormuz.

This first section dealt with the strategic importance of the Strait of Hormuz for global energy markets and political stability in the Arab Gulf region, as well as understanding Iran’s maritime strategy of using asymmetrical warfare to disrupt vital energy shipping transiting the Strait. In the second section, I will be analyzing Iran’s present maritime capabilities to ascertain the feasibility of their asymmetric strategy, and whether they could actually shut down shipping within the waterways.

Imran Shamsunahar is a recent graduate of the University of Hull, where he earned a Master’s in Strategy and International Security. He holds a Bachelor of Arts in History from the University of Toronto. He developed an interest in maritime security and naval warfare during his graduate studies, and wrote his dissertation on the South China Sea dispute and contemporary maritime strategy. He is currently based in his home city of Kuala Lumpur where he is interning for Horizon Intelligence, a Brussels-based security risk monitoring company catering to travelers. In the meantime, he enjoys writing articles on naval matters as a hobby. He is hoping to continue his studies in the near future, hopefully once again in maritime security.

14. David B. Crist, ‘Gulf of Conflict: A History of U.S. – Iranian Conflict at Sea’, The Washington Institute for Near East Policy, June 2009. Available online: http://www.washingtoninstitute.org/uploads/Documents/pubs/PolicyFocus95.pdf

One thought on “Waters of Black Gold: The Strait of Hormuz Pt. 1”