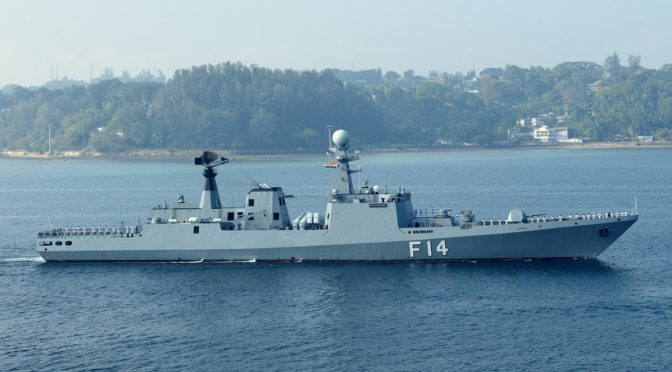 The South China Sea has always been a sensitive and thorny issue for the members of the Association of Southeast Asian Nations (ASEAN). Since its establishment on August 8, 1967 with its five founding members, Indonesia, Malaysia, Thailand, the Philippines, and Singapore, ASEAN has treaded carefully. This includes the conflicts and disputes witnessed during its 53 years of engagement, dialogue, cooperation, and the later inclusion of five other members that has been the bedrock of its members’ foreign policy. In the following years, Brunei, Cambodia, Myanmar, Laos, and finally Vietnam (as well as inviting Timor Leste as an observer) make up what ASEAN is today. The pillars of the ASEAN Community include the ASEAN Political-Security Community (APSC), ASEAN Economic Community (AEC), and ASEAN Socio-Cultural Community (ASCC) that was created in 2015 as a signal for how far  ASEAN members have progressed since the organization’s inception more than 50 years ago.

As dynamic as the international community and regional bloc is today, can ASEAN continue to make its relations work in spite of the great power rivalry near its shores? Will each member nation play by the “ASEAN way” and with “ASEAN centrality” when it comes to navigating the might of the U.S. and China? Malaysia offers an interesting case study, and especially in the context of ASEAN’s historical background and recent developments. Previous strategies and actions by Malaysia and ASEAN merit closer examination, as well as the PLA Navy’s maritime overreach in the South China Sea. This will go to show how small and medium powers could play a role in the grander scheme of great power rivalries.

Malaysia, a nation of only 33 million citizens with 4,809 kilometers of coastline, has porous maritime borders and is open to many traditional and non-traditional security threats. As a member of ASEAN, it is strategically located in the heart of ASEAN’s 10 member nations that encompass 650 million citizens.

Looking back on Malaysia’s history as a maritime empire during the pre-colonization age of 1500s, the Malay sultanate of Malacca had decent relations with the Ming Dynasty of China. The eunuch Admiral Zheng He (known as Cheng Ho in Malaysia) docked several times in Malacca, which was a tributary state to the Ming Dynasty. The Emperor of China saw Malacca as an important trading partner, and when it was conquered by the Portuguese commander Afonso de Albuquerque in 1511, the Chinese demonstrated their rage by brutally executing Portuguese diplomats based in Peking.

In the 20th century, Malaysia was the first ASEAN nation to normalize relations with Mao Zedong’s China, despite having communist insurgents within Malaysian borders. Malaysia’s second Prime Minister Tun Abdul Razak Hussein made a strategic move where Malaysia needed China to counterbalance the communist threat within its own country. In 1989, communist threats in Malaysia ended with a peace agreement with the Communist Party of Malaya (PKM) signed on the border of Malaysia and Thailand. This was a clear indication of Malaysia’s success in keeping China as a friend while mitigating communism in its own lands. Decades later in 2018, the seventh Prime Minister of Malaysia, Tun Dr. Mahathir Mohamad, commented that China in medieval times was a strategic partner for Malacca and will continue to be an important friend for modern day Malaysia. “The Europeans came to Asia for a number of times, and decided to conquer and exploit our wealth and spices in the Far East. How can we trust the Europeans? China came as a friend and helped us grow,” Tun Mahathir further commented.

It is no secret that despite Malaysia’s stance against certain U.S. actions in its war on terror and invading Iraq and Afghanistan in the aftermath of the 9/11 attacks, its ideals are based on American dreams. Even its flag is almost similar to the star spangled banner, or Jalur Gemilang as the Malaysian flag’s nom de guerre, or “Stripes of Glory,” as it is known. Malaysia’s Declaration of Independence is also based on the American declaration after gaining its independence from Great Britain’s empire. These historical linkages are significant as the U.S. is important for Malaysia and ASEAN, even when there are disagreements on American foreign policy and military actions.

This strategy is known as “soft balancing.” Malaysia and ASEAN cannot compete militarily nor economically with the U.S. and China, and it cannot mistakenly begin to choose sides or pick which one will win or lose. In this sense, ASEAN’s Zone of Peace, Freedom and Neutrality (ZOPFAN) signed in 1971 by its foreign ministers have worked to the region’s advantage. It is well-known that ASEAN was established to counteract the domino effect around when the U.S. began occupying Vietnam, and it had its own rivalries between democratic and communist governments that featured Soviet-backed North Vietnam, Mao’s China, and other communist allies. After South Vietnam fell Malaysia and ASEAN did not witness a domino effect and communist victory did not threaten the democracy of other Southeast Asian states. Vietnam successfully rebuilt after the war and normalized relations with the U.S. several decades later.

China’s divide and conquer strategy with ASEAN members and especially with South China Sea claimants like Indonesia, Malaysia, the Philippines, and Vietnam have thus far worked by having proxies play out China’s bidding within ASEAN. In 2012, it was unprecedented that ASEAN could not agree on a Joint Communique with regard to ASEAN’s stance on the South China Sea. Members of ASEAN heavily reliant on China’s wealth and investment overturned the region’s overall commitment to maintain its ZOPFAN strategies. Yet being neutral and friendly to all is what makes ASEAN effective. Can ASEAN recalibrate once again?

Malaysia sent a unilateral submission to the United Nations on December 2019 on claims of its South China Sea Exclusive Economic Zone (EEZ) which also overlaps with China’s and Vietnam’s claims. It was expected by the Malaysian government that China will heavily and strongly protest the claims by Malaysia. However, the submission also gave mixed signals and confused observers of the region, commenting that it puts a dent on Malaysia and Vietnam’s 2009 joint submission on the Commission on the Limits of the Continental Shelf (CLCS).

Earlier in 2020, Malaysia’s national oil and gas company Petroliam Nasional Berhad (PETRONAS) contracted and deployed the drillship West Capella, which not only provoked China but spawned a three-way standoff between Malaysia, China, and Vietnam. Malaysia choose this path and ignored the 2009 joint submission with Vietnam and undermined ASEAN solidarity to a degree. Yet Malaysia’s actions were also praised from some quarters, since prior to this it behaved cautiously when it comes to disagreements with China in the South China Sea.

Claimants of the South China Sea should adhere and accept any decisions similar to the 2016 decision by the Permanent Court of Arbitrations that ruled in favor of the Philippines. The ruling decided that “there was no legal basis for China to claim historic rights to resources within the sea areas falling within the “nine-dash line.” Secondly, the United Nations Convention on the Laws of the Seas (UNCLOS) does not provide for a group of islands such as the Spratly Islands to generate maritime zones collectively as a unit. Third, China had breached its obligations under the convention on the International Regulations for Preventing Collisions at Sea and Article 94 of UNCLOS maritime safety. Finally, China violated its obligations to refrain from aggravating or extending the parties disputes during the pendency of the settlement process. It was not a surprise that China rejected the arbitration and continues to extend its operations deep into the South China Sea.

However, if China is to earn the respect worthy of a superpower it so craves then it should seek cooperation and collaboration in the much-stalled Code of Conduct for the South China Sea. China needs to earn the trust of its neighbors and friends, otherwise continued aggression could put China at the losing end of the disagreement in the long term as other nations refuse joint ventures within the resource-rich South. China should set a good example, and it could also work closely with other claimants of the South China Sea by promoting collaborative efforts toward shared prosperity. ASEAN has always believed in the prosper-thy-neighbor approach, where a thriving and stable community will spur growth to other corners of the region.

China unequivocally understands that having a strong military and a powerful PLA Navy will make it formidable in global affairs. China began modernizing its navy after experiencing rapid economic growth in the immediate post-Cold War era, and is projected to muster 360 battle force ships against the U.S. Navy’s 297 by the end of 2020. It is projected to further increase to 400 battle ships in 2025 and 425 by 2030. Its capabilities in naval ships, aircraft, and weapons are comparable to those of major Western navies. Finally, the PLA Navy is modernizing on multiple fronts, including maintenance and logistics, doctrine, personnel quality, education and training, and exercises, and it is quickly addressing deficiencies in these areas while simultaneously expanding its Coast Guard as well.

The navies of ASEAN member states will never come close to the PLA Navy. Yet ASEAN is still attempting to maintain China as an important strategic partner, especially economically, and at the same time reap the second-hand benefits of U.S. security guarantees to other regional actors. China has promoted the Maritime Silk Road (MSR) and the Belt and Road Initiatives (BRI) which are both worth a staggering $6 trillion from 2013-2018 in trade between China and BRI countries, and investments have totaled $110 billion so far. With this amount of investment and trade, China and ASEAN will be working closer than ever even as China’s naval predominance grows.

ASEAN’s partner dialogues such as the ASEAN Regional Forum, ASEAN Defense Ministerial Meeting (ADMM) and ADMM-Plus, as well as East Asia Summit (EAS) are effective and important platforms for ASEAN to have some access and influence with great powers, who are important members of these multilateral gatherings. If ASEAN continues to see that China’s self-interest supersedes the interest of the regional and global communities, China’s grip could be untangled with an approach of a “soft-silk strategy,” where individual nations need not pursue hardline policies and are free to pursue their own soft-balancing approaches. But collectively, ASEAN members and partners commit to work together and influence Chinese behavior toward a more cooperative nature.

If China follows the international rule of law it will grow stronger and become more respected. Its growing integration with the region need not be accompanied by a growing sense of mistrust. China needs ASEAN to maintain its growth, and ASEAN needs China and the U.S. for both growth and security, respectively. Once this is understood and reflected in the policies of great powers, new dynamics will not only benefit ASEAN Members, but ultimately China and the U.S. as well.

Afdal Izal is a Researcher on Asia Pacific Security with focus on maritime security and the balancing of great powers in Southeast Asia, specifically in the South China Sea. He is a PhD Candidate at the Graduate School of International Relations, International University of Japan.