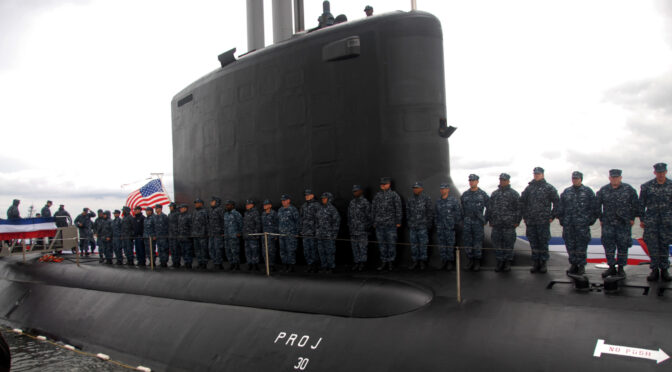 How would you describe the role and mission of the aggressor squadron?

The U.S. Submarine Force stood up an Aggressor Squadron (AGGRON) in October 2019 as one initiative in support of the broader Department of Defense focus on strategic competition. AGGRON enhances all undersea forces’ training and readiness for potential conflict in every area of operations around the world, focused first and foremost on our strategic competitors in the maritime/undersea domain.

AGGRON is a team focused on high-end combat training through emulating competitors in all training and certification exercises. AGGRON serves as the undersea forces’ expert in employing competitors’ potential capabilities. AGGRON is also focused on improving undersea combat tactics, techniques, and procedures to ensure all doctrine is aligned against the continually evolving capabilities of our competitors. AGGRON personnel work with submarine crews at all stages of operational and training schedules and have drastically improved the Submarine Force’s ability to win in combat.

How is the training experience different for Sailors who go up against the aggressor squadron compared to a blue-on-blue event?

AGGRON goes head-to-head with submarine crews to play the role of an active, thinking, and tactically engaged enemy force. AGGRON personnel engage with submarine leadership to ensure our forces are ready to predict and proactively position for expected adversary behaviors based on the close study of their capability and tactics.

This modeling of a capable competitor is geared toward driving the proper tactical decision-making by crews during combat operations and to develop muscle memory through repetition in combat training. AGGRON’s goal is to ensure our Submarine Force is always training against the highest fidelity. We have developed processes to refocus training and certification on higher-fidelity combat experiences and developed new tools and concepts to support high-end warfighting.

What are the core takeaways you hope Sailors gain from the experience? How can the Sailors use that experience going forward to independently improve their own warfighting skills?

Sailors leave every training event with a better understanding of how our competitors think and operate, with an emphasis on their current or near-term combat capabilities. Every training event better prepares each sailor to handle combat operations. We aim to produce winners and losers, just like there are in battle, and raise the force’s standards to ensure our sailors are continually more elite than the opponent. Sailors take these lessons forward, returning to the next exercise or training event more prepared to win.

What are the risks of mirror-imaging blue force methods in training and force development? What unique value and realism comes from being well-versed in adversary capabilities and doctrine?

The risk is we will not train like we will fight; we would instead train against our own tactics, techniques, and procedures instead of that of our competitors. This methodology risks developing a false understanding of our capabilities and tactics as they relate to the competition, which would not maximize our lethality in combat.

Folding in OPFOR realism creates an entire force of warfighters that are experts on the nature of the competition. Each person is a link to success and when each person knows adversary capabilities and doctrine as well as the adversary themselves, there are less unforeseen circumstances in combat, therefore enhancing combat survivability and lethality.

What are some key enablers for the learning experience surrounding AGGRON training?

AGGRON has worked collaboratively with the Submarine Learning Center to ensure training on competitor capabilities, tactics, movements, and strategic objectives are all folded into each area of the schoolhouse’s integration with the waterfront. An adversary-focused culture has been inculcated in all pipelining schooling as well as deployment readiness training and certification.  AGGRON is intimately involved in the Submarine Force’s doctrine and tactical development processes, so that we are continually exploring and assessing existing and new tactics, techniques, and procedures to counter evolving threats.

How do you interact with other communities, including those with an ASW role, such as the surface and aviation communities?

The AGGRON is primarily resourced to train unit-level submarine crews, submarine squadron staffs, and Submarine Learning Site (SLS) staffs about what to expect from their potential opposing counterparts, and helps explore new tactics, techniques, and procedures to counter those threats. AGGRON fosters and cultivates relationships throughout the Intelligence Community to ensure that the most current and accurate intelligence is shaping training and simulation.

Standing aggressor or “opposing force” (OPFOR) units that are trained in the doctrine and tactics of potential opponents, or the “Red” force, are crucial for improving the realism of training exercises. A submarine aggressor force could certainly provide invaluable anti-submarine warfare training opportunities for the Navy’s surface and aviation communities as well.

Captain Eric Sager was commissioned in 1998, graduating from the United States Naval Academy. Sager’s operational assignments include division officer onboard USS HONOLULU (SSN 718) where he completed a Western Pacific deployment, serving as Engineer Officer on USS RHODE ISLAND (SSBN 740)(GOLD), completing four strategic deterrent patrols, and as Executive Officer on USS NORFOLK (SSN 714) completing an AFRICOM/CENTCOM deployment. Sager commanded USS CALIFORNIA (SSN 781), leading his crew on an unplanned surge deployment and a scheduled EUCOM deployment in 2016. He received the 2017 Vice Admiral Stockdale Award for Inspirational Leadership for his time in command. Ashore, Sager has served in various positions, including on the staff of Commander, Submarine Forces as the Tactical Readiness Evaluation Team Executive Officer, Deputy Commodore of Submarine Squadron Twelve, and as the Submarine Force Atlantic Prospective Commanding Officer Instructor. Sager is currently assigned as the Director of the Undersea Warfighting Development Center’s Aggressor Squadron.

Featured Image: English: NORFOLK (Oct. 28, 2011) Sailors assigned to the Virginia-class attack submarine Pre-Commissioning Unit California (SSN 781) board the boat as they “bring her to life” during a commissioning rehearsal ceremony the day before the Navy’s newest Virginia-class submarine is commissioned. (U.S. Navy photo by Chief Mass Communication Specialist John Osborne/Released)