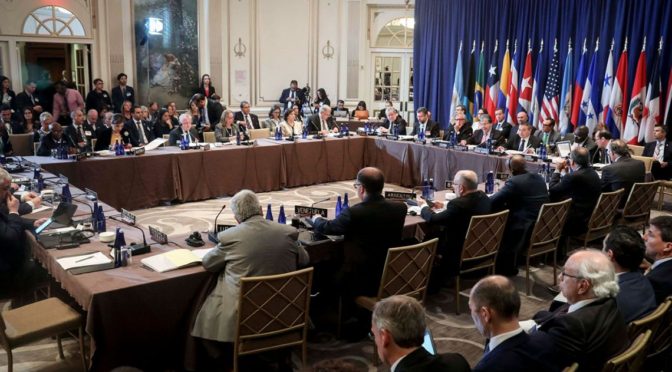 In light of this development, what more can regional governments do to jointly combat illegal, unreported, or unregulated (IUU) fishing? One tool in the region’s arsenal could be amended in order to combat this particular type of threat: the Inter-American Reciprocal Assistance Treaty (Tratado Inter-Americano de Asistencia Recíproca: TIAR), more commonly known as the Rio Treaty as or the Rio Pact.

For months, a multinational fishing fleet of around 300 ships has operated in the South Pacific, close to the territorial waters of South American nations. Several of these vessels have been identified as originating from the People’s Republic of China, but it is unclear if the majority of vessels are Chinese.

The author recently discussed the fleet in an August 14 commentary for CIMSEC (“The Ecuadorian Navy’s Constant Struggle Against IUU Fishing”) when the vessels crossed international waters between Ecuador and the Galapagos Islands, which are part of Ecuador. At the time of this writing, the fleet is heading south, and has already passed through international waters close to Peru. At the time of writing, the fleet is passing close to Chile’s territorial waters

Regional navies are actively monitoring the fleet. The Peruvian navy announced, via Communique 08/2020, that is has deployed a King Air B200 aircraft, the coastal patrol vessel Rio Cañete, in addition to other units for surveillance and patrol operations. Similarly, Chile’s general maritime directorate (Dirección General del Territorio Marítimo y Marina Mercante: DIRECTEMAR) has explained that it is aware of the fleet sailing southward, as “every year, some of these ships cross our  coasts and then cross the Magellan Strait,” as they chase maritime life, including squid. The directorate similarly stated that it is ready to deploy units to monitor the fleet.

Nevertheless, given the vast size of the fishing fleet and limited maritime and aerial assets that the Ecuadorian, Peruvian, and Chilean navies and air forces possess, it is unclear if any vessels have managed to cross, or will cross in the future, into the waters of these countries to carry out illegal fishing activities.

The U.S. government has taken a more active role regarding this situation, especially given that at least several dozen vessels are Chinese. For example, the U.S. embassy in Peru issued an alert via Twitter about the “Chinese fishing fleet” operating close to Peruvian waters. Previously, the National Security Council tweeted that it “stands with President Lenin [Moreno] ….against any direct aggression, directed towards their economic and environmental sovereignty,” when the fleet passed near Ecuador.

At this point, it is worth discussing what other legal tools regional governments possess to face the problem of predatory fishing from extra-hemispheric fishing fleets. Several of these ships come from China, Taiwan, the Philippines, among other Asian nations. They travel to South Pacific waters (and other bodies of water across the world) since their own territorial waters have been over-fished and depleted. The aforementioned TIAR could be reformed to more effectively combat IUU fishing.

A brief historical summary is necessary: “the most immediate foundations of the Inter-American Treaty of Reciprocal Assistance go back to, at least, the Declaration of Lima of December 24, 1938,” explained a scholar to the author. In other words, while the Rio Pact is often associated with the Cold War, the idea of collaboration and hemispheric solidarity predates this period of history.

The TIAR was created in 1947 and is known for Article 3, a clause that calls for collective security should one of its members be attacked. The Treaty has been invoked around 20 times since its inception, such as to support the U.S. blockade against Cuba during the missile crisis. The treaty was also invoked after the 9/11 attacks.

Most recently, in late 2019, parties to TIAR invoked it as part of a regional strategy to pressure the regime of President Nicolas Maduro in Venezuela. It is important to stress that TIAR’s collective security clause was not invoked to justify some type of joint military operation against Venezuela. Rather, the treaty was activated to apply sanctions on individuals associated with President Maduro’s administration.

Bolivia, Ecuador, Nicaragua, Mexico, and Venezuela have withdrawn from TIAR. However, Venezuela returned by decision of interim President Juan Guaido, but President Nicolas Maduro, whose government has de facto control of the country, is against it.

TIAR was designed with a focus on inter-state wars and extra-hemispheric aggressions. The document was revised and amended in 1975, but the overall objective remains the same. With that said, there are sections that could potentially be interpreted as referring to IUU fishing.

For example, Article 5 explains how the TIAR’s council can meet if there is “a conflict or serious event that might endanger the peace of America,” while Article 9 mentions how “the sending by or on behalf of a State of armed bands, groups, irregulars or mercenaries, which carry out acts of armed force against another State.” Similarly, Article 11 mentions how “the High Contracting Parties recognize that, for the maintenance of peace and security in the Hemisphere, collective economic security for the development of the Member States of the Organization of American States must also be guaranteed.” It goes without saying that economic security for coastal nations includes the fishing industry.

While none of these articles mentions IUU by name, or directly addresses transnational, non-traditional security threats such as illegal fishing, it could be argued that the spirit of some of these articles touches on this problem. The fact that TIAR has been invoked to apply sanctions against the Maduro government already serves as precedent for the Treaty being utilized to address issues that are not directly linked to military aggressions by extra-hemispheric powers.

Another possibility is that the TIAR could be reformed and expanded to include non-traditional security threats like IUU fishing. This new version could be a combination of the existing document and other international agreements that deal with maritime issues, like the UN Convention on the Law of the Sea. This new document could be called TIAR 21, in that it should be updated to address 21st century Western Hemispheric security threats and challenges. Ideally, parties to TIAR 21 could activate it when, for example, a large extra-hemispheric fishing is operating close to their borders, so neighboring states can deploy naval assets to support patrol operations in territorial waters and exclusive economic zones.

There are several issues to keep in mind when it comes to updating the TIAR to include IUU fishing. One question is whether TIAR 21 could only be activated to deal with extra-hemispheric fishing vessels. There is a fair amount of intra-hemispheric IUU fishing in the region. For example, the Royal Bahamas Defence Force apprehended two Dominican poaching vessels in its waters in mid-September. Thus, it would be problematic if Western Hemispheric countries activate TIAR 21 against one another to combat intra-regional IUU fishing.

Similarly, what would activating TIAR 21 mean exactly when it comes to IUU fishing? Ideally, regional navies could be deployed to monitor extra-hemispheric fishing fleets. It is logical to assume that at some point, some of these vessels will enter into the territorial waters of Ecuador, Peru, Chile or Argentina, as such incidents have repeatedly occurred in the past. Thus, by activating TIAR 21, a government could request that other governments deploy vessel or aerial assets to assist with monitoring this fishing fleet, and intervene if necessary if one crosses into its own territorial waters.

This proposal is not without precedents. Thanks to the Shiprider Agreements the U.S. has signed with several Caribbean nations, an officer from Jamaica, for example, can sail in  a U.S. Coast Guard (USCG) vessel and be able to apprehend a vessel operating in Jamaica’s territorial waters. The Jamaican law enforcement officer is the individual actually making the arrest, even if he is the sole Jamaican aboard a USCG ship.

Nevertheless, this proposal is also problematic, as there are historical animosities throughout Latin America that may prevent countries from wanting to allow the vessels of other navies in their territorial waters without an escort. There is also the problem of regional navies not having sufficient assets to deploy to assist a fellow navy, even if requested. This is another issue that will have to be addressed, but the general concept is that greater cooperation amongst South American navies and air forces is needed to combat extra-hemispheric, non-traditional security threats.

Finally, it is worth noting that international organizations, not just individual governments, have offered their support to South America as regional nations deal with the latest fishing fleet crossing the South Pacific. For example, in late September, representatives from the United Nations met virtually with government officials from Ecuador to discuss how the UN can help Quito protect the rich biodiversity of the Galapagos Islands. Similarly, the Permanent Commission for the South Pacific (Comisión Permanente del Pacífico Sur: CPPS), which has Chile, Colombia, Ecuador, and Peru as members, issued a declaration on August 5 calling for greater cooperation and exchange of information to address the presence of international fleets in the region and the dangers of overfishing.

In other words, there are several mechanisms already trying to help combat IUU fishing, but apart from information sharing, more actual vessels in the water are needed to monitor and, if necessary, intercept, these fishing vessels.

Looking forward, the Organization of American States, under which TIAR operates, and its member states should consider reviewing and upgrading TIAR and updating it into an agreement that can help Western Hemisphere states  addresses 21st century threats, thereby creating a  “TIAR 21.”

When discussing maritime security, there is a natural tendency to primarily focus on the number and sophistication of maritime and aerial assets, followed by overall strategies that navies, combined with other services, can carry out to combat an aggressor. However, it is important to also think even farther “outside of the box,” and discuss the legal documents and arrangements that governments can utilize to obtain international support to protect maritime territory from major threats like illegal, unreported, or unregulated fishing.

One thought on “TIAR 21: Maritime security, the TIAR, and IUU fishing in the Western Hemisphere”