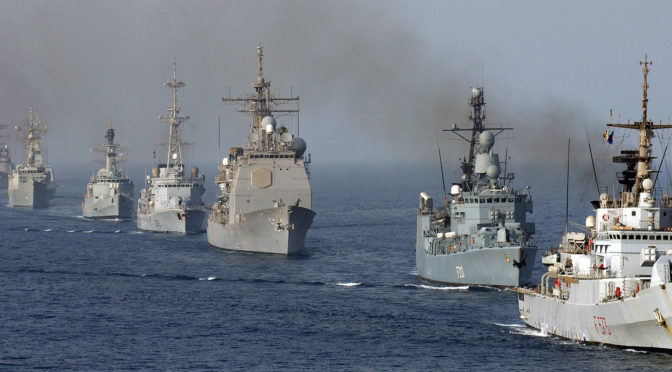 Part of U.S. Naval Forces Europe and U.S. European Command, the Sixth Fleet is the principal organizing body for American naval activities in and around Europe. In 2020, the United States Sixth Fleet, one of three numbered fleets designated specifically for American forward naval presence, celebrated its 70th anniversary. U.S. naval presence in Europe goes even further back than that. In the early 19th century, the Barbary pirates of Northern Africa constituted one of the pivotal founding memories for the American sea services. U.S. presence in the region continued over the centuries. In 1946, President Harry Truman dispatched the battleship USS Missouri to Turkey in a show of force in the emerging post-World War II order.

The Sixth Fleet area of responsibility includes, inter alia, the Mediterranean, the Black Sea, the Norwegian Sea, the Baltic Sea, and the North Sea. It also includes the eastern Atlantic Ocean, although that responsibility is shared with the recently reactivated U.S. Second Fleet based in Norfolk, Virginia. Additionally, Sixth Fleet operations from Naples, Italy, cover vast stretches of the African coast, excluding those that are part of the area of responsibility of the U.S. Fifth Fleet based in Manama, Bahrain.

The Fifth Fleet and the third forward-based establishment, the U.S. Seventh Fleet in Yokosuka, Japan, have been the subjects of official naval history publications.1 These explore the history of American institutionalized naval activity in the region in question and provide policy-makers a grasp on the opportunities for and challenges to U.S. naval forward presence. The Sixth Fleet and U.S. Naval Forces Europe are conspicuously absent from that canon.

In fairness, the Sixth Fleet suffered a significant downgrade of geostrategic significance after 1991. With the demise of the Soviet Navy and American political interest shifting first to troop reduction and then to other areas of the world, Europe became somewhat of a secondary operating theatre. This is not to say that the U.S. Navy and its allies did not field substantial maritime assets for crises and armed conflicts such as Operations Desert Storm (1991), Sharp Guard in the Adriatic (1993-1995), and Odyssey Dawn in Libya (2011).

In Northern Europe, maritime operations that had been a cornerstone of the 1980s maritime strategy all but ceased. Illustratively, American naval commitment to the annual exercise Baltic Operations – or Baltops – waxed and waned.2 For the American public and its naval planners, the Persian Gulf and the Taiwan Strait featured much higher on the agenda than operating areas around the European peninsula.

In line with the changing international security environment, American troop presence in Europe was significantly reduced. At the same time, most European countries also massively decreased the size, and often the capabilities, of their armed forces. The objective: cashing in on an assumed “peace dividend” and reflecting the changing character of armed conflict they confronted. Instead of Soviet submarines or Warsaw Pact amphibious forces, it was the Balkan Wars of the 1990s and the counterterrorism and counterinsurgency land wars of the 2000s that occupied American and European planners’ minds. European navies often bore the brunt of the cutbacks and resource allocations involved and are only slowly recovering.3

However, Russia’s annexation of Crimea and the ensuing war in Eastern Ukraine, the disintegrating Middle East with the Syrian civil war, the rise and fall of the Islamic State, and widespread instability in all of Northern Africa coupled with sea-borne mass migration and refugees are just some of the significant developments of the 2010s that have thrust Europe – and the importance of the U.S. Sixth Fleet – back on center stage of international security politics. Russian undersea activity in the Mediterranean and on the northern flank is creating massive headaches for those who engage in the somewhat lost art of anti-submarine warfare. The Baltic Sea region is now considering Crimean scenarios in its backyard.

The strategic geography of Europe has evolved, but so has the Russian naval posture thanks to Russia’s embrace of hybrid or gray-zone tactics. To make matters even more challenging, China has significantly upped its influence on Europe. Beijing promises economic benefits by way of digitalization and its Belt and Road Initiative. Critical European maritime infrastructure has also been in the focus of Chinese state-owned businesses, and the People’s Liberation Army Navy (PLAN) is making regular port calls to European waters. It also conducts naval exercises with the Russian Navy in the Baltic and Black Seas.4

Finally, another significant problem stems from within the North Atlantic Treaty Organization (NATO) itself. Alliance coherence has suffered over the years from diverging interests in member states, competition for influence, lackluster defense spending, and those global challenges that defy traditional nation-state capacities: migration, climate change, and the COVID-19 pandemic. American troop presence, and the reduction thereof, was used as a bargaining chip by President Donald Trump as recently as 2020 in order to punish Germany and to reward other member states.

This goes to show how little the importance of American military presence in Europe is understood on either side of the Atlantic. This is particularly the case for U.S. naval forces that have quietly gone about expanding their forward presence and rotational deployments. Still, comparatively little literature exists in the public domain about American naval engagement in and with Europe. An official, unclassified history of the Sixth Fleet would go a long way to provide policy-makers and the public with information about the bigger picture of naval cooperation and U.S. Navy activities in Europe.

It would also be immensely helpful for those defense specialists in Europe that seek to work with the incoming Biden/Harris administration. After all, the annual Baltops exercise has seen a significant uptick in U.S. Navy visibility (the 2019 maneuver was commanded by Vice Admiral Andrew Lewis, Commander, U.S. Second Fleet), but American naval presence is rarely contextualized or studied. Four ballistic missile defense destroyers of the Arleigh-Burke-class are now forward-stationed in Rota, Spain, complemented by Aegis Ashore installations in Romania and Poland. These trends, as well as those adverse challenges described above, are likely to continue in one form or another.

It is highly unlikely that this year, 75 years after the Missouri’s trip to Turkey, will be commemorated with a similar U.S. naval deployment – due to the absence of battleships in the American warship inventory, the raging pandemic, and the divide in Turkish-American and Turkish-NATO relations in the wake of President Recep Tayyip Erdoğan’s politics. It should, however, signal the start to an honest effort conceptualizing American naval presence and seapower in Europe. It is as important for Americans as it is for Europeans.

Dr. Bruns heads the Center for Maritime Strategy & Security (CMSS) at the Institute for Security Policy at the University of Kiel. His work focuses on naval strategy and the German and U.S. navies. Together with Sarandis Papadopoulos, he has recently published Conceptualizing Maritime & Naval Strategy. Festschrift for Captain Peter M. Swartz, United States Navy, retired (Nomos, 2020). He is the 2021-2022 Fulbright McCain Fellow at the US Naval Academy.

0 thoughts on “The U.S. Needs an Official Sixth Fleet History, and the Europeans Do Too”