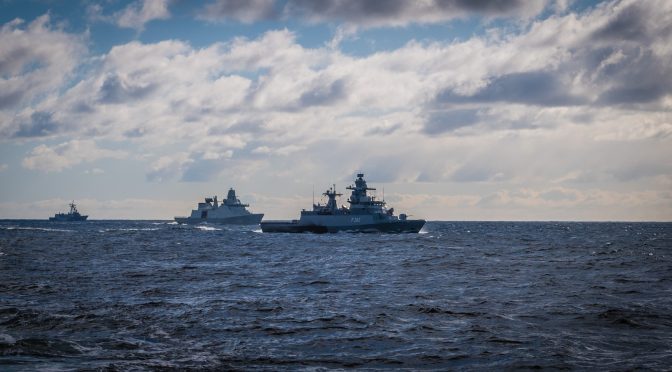 Earlier this year, General Scapparotti, former Commander of U.S. European Command and Supreme Allied Commander Europe of NATO forces, sounded the call for a greater U.S. Navy presence in the Euro-Atlantic region to counter Russian aggression. The U.S. Navy has been increasing its presence in the region since Russia’s illegal annexation of Crimea in 2014, most notably conducting patrols in the Baltic and Black Seas. More recently, the U.S. Navy reestablished U.S. Second Fleet in Norfolk, Virginia, the commander of which will also head NATO’s new Joint Force Command in the same location, and is providing the flagship for Standing NATO Maritime Group 1 for all of 2019, one of four groups that make up NATO’s Standing Naval Forces.

Despite these increases, General Scapparotti was correct to say that an even greater U.S. Navy presence in the region is needed. However, greater U.S. Navy presence in Europe means greater involvement in NATO; and greater involvement in NATO requires greater use of NATO doctrine, some of which is not currently practiced by the U.S. Navy.

One such doctrine is the Allied Worldwide Navigational Information System, or AWNIS, which is crucial for conducting military operations at sea, especially mine warfare, while minimizing disruption to merchant shipping. This crucial doctrine can help modify and reroute sea lines of communications as they become threatened and endure combat operations. But unfortunately, the U.S. Navy knows very little about this system, its processes, or its merits.

AWNIS is not a technical system but rather “instructions for the promulgation of navigational dangers during times of war,” as the first NATO Military Committee document described it in 1952. AWNIS is necessary to conduct operations at sea while minimizing disruption to the maritime domain because it provides the procedures to promulgate Safety and Security of Navigation (SASON) information on navigation hazards that result from military operations—e.g. sea mines—fulfilling legal obligations specified in international humanitarian law and conventions such as Safety of Life at Sea (SOLAS).

To accomplish this, AWNIS collates inputs from tactical units—e.g. mine countermeasure (MCM) forces—then disseminates the information to merchant and military ships based on classification level. To promulgate the information to merchant ships, AWNIS uses the existing civilian Worldwide Navigation Warning System (WWNWS) architecture to transmit Navigation Warnings (NAVWARNs). To promulgate the information to military ships, AWNIS uses the Q-Message system. More information on AWNIS processes can be found in the primary AWNIS publication, Allied Hydrographic Publication 01 (AHP-01). The Q-message system is specified in a classified supplement to AHP-01.

The British Royal Navy, in conjunction with what is now called the U.K. Hydrographic Office (UKHO), developed the AWNIS doctrine in response to lessons learned during WWI and WWII. During WWI, Central Powers sank more than 5,000 allied and neutral merchant ships in the North Atlantic Ocean with projectiles, torpedoes, and mines, creating navigational dangers for all seagoing vessels, including submarines. However, there was no procedure in any navy at the time to track the shipwrecks and sea mines, or disseminate their locations while taking into account operational security. Additionally, mine clearance and salvage operations take time, as do chart corrections.

Without a procedure in the military to identify and share information about navigational hazards during the war, civilian institutions had to locate and mitigate these hazards when the war ended. To this day, shipwrecks from the wars of the 20th century and, more dangerously, sea mines, are still being discovered in the waters around Europe. Germany placed over 40,000 mines around the British Isles during WWI alone. A key part of the AWNIS doctrine is post-conflict stabilization, which ensures all hazards to navigation that emerge during a conflict are tracked, then declassified and shared with civilian institutions to ensure restoration after the conflict is over.

In NATO, the AWNIS doctrine facilitates Mine Danger Areas (MDAs) and Q-Routes, in addition to other threats to safety and security of navigation. AWNIS Officers embarked with MCM forces draft MDA requests to the AWNIS lead, known as the Safety of Navigation Information Coordinator (SONIC), who is co-located with the MDA establishing authority, usually the Maritime Component Commander.

While it is crucial that MDAs be reported to all friendly naval forces, this detailed information is classified and cannot be shared with merchant shipping. If merchant shipping were told where MDAs are established, the enemy responsible for laying the mines would know which mines have been found. Thus, the details of an MDA are classified and distributed via the Q-Message system only. To fulfill the legal obligation to inform merchant shipping of the mine threat, NAVWARNs are used to establish Areas Dangerous to Shipping (ADS), which can cover a wider area than actually affected in order to maximize the safety of the merchant mariner and, ideally, freedom of maneuver for naval forces. Similar to a Maritime Exclusion Zone, which is also established by NAVWARN, an ADS should be carefully planned in order to ensure the least disruption to the maritime domain. Another doctrine exists in NATO and works closely with AWNIS in this effort—Naval Cooperation and Guidance for Shipping (NCAGS).

More than 50,000 merchant ships sail the world’s oceans, carrying more than 90 percent of the world’s trade. Conversely, only 1,500 warships sail the world’s oceans, of which approximately 200 are at sea at any given time, the rest remaining in port for maintenance and training. While vastly outnumbered, what warships do at sea can greatly affect merchant shipping, potentially disrupting its free movement and thus the global economy. AWNIS and NCAGS work in concert to reduce this potentiality.

While the AWNIS doctrine is responsible for managing the environment on which both military and merchant ships sail, the NCAGS doctrine provides the procedures for military forces to cooperate with and guide merchant shipping, effectively assisting shipping to travel from point A to B safely, i.e. freedom of navigation. This can be accomplished using basic routing guidance like Sailing Information, or through more tactical measures like group transit and lead-through operations. NCAGS relies on the AWNIS overview of the environment to accomplish this task. In the event of lead-through operations, NCAGS also relies on Q-Routes, which are pre-planned channels and routes surveyed during peacetime. Utilizing the Q-Message system, Q-Routes are activated as needed to ensure access to ports or other areas of operational importance for military and merchant ships.

In addition to closely cooperating with mine warfare and NCAGS, AWNIS also collates information necessary for the Maritime Component Commander to efficiently position assets to protect sea lines of communication (SLOCs). When navigational hazards like minefields and shipwrecks caused by mines, torpedoes, or missiles are plotted, the Maritime Component Commander is able to visualize the battlespace and the threats to SLOCs. Overlay the operational intelligence picture of the adversary’s naval and anti-access capabilities, especially coastal missiles, and the picture becomes mostly complete.

NCAGS officers have the means to recommend routes for both merchant shipping and strategic sealift around these threats, effectively establishing a SLOC. This also aids in the deconfliction of military activity from merchant shipping. For example, during a scenario in which merchant ships must sail from the U.K. to Norway during a major conflict, NCAGS would rely on AWNIS to show where all recent missile and mine strikes have occurred at sea or in ports, all MDAs, and activated Q-Routes in order to accurately advise the ships where to sail. NCAGS officers deployed in ports or on merchant vessels would be used to communicate sensitive information such as the details of a Q-Route.

The AWNIS doctrine is increasingly relevant in the context of an aggressive Russia that is openly challenging the laws of the sea through hybrid maritime activity. In November 2018, Russia closed the Kerch Strait to innocent passage, first by promulgating a false NAVWARN, then by placing a merchant vessel under the Crimean Bridge to block the strait. More recently, Russia has been promulgating NAVWARNs for naval exercises in the Black Sea that cover larger areas than necessary, seemingly with the intent of disrupting freedom of navigation. In most cases, the Russian Federation Navy (RFN) does not fully use these exercise areas.

While the RFN is ultimately responsible for the safety of merchant vessels passing in or near these exercise areas, accidents are possible. Even worse, it is difficult to foresee how the international community would respond to such an accident, especially if there were indications the accident was intentional, e.g. to disrupt the passage of a merchant vessel bound for a Ukrainian port. Regardless, as long as Russia continues to abuse the international systems in place for disseminating SASON information, the international shipping community would be right to distrust information promulgated by and for the RFN. Conversely, the U.S. Navy and NATO need to take care to always use these systems correctly, which the AWNIS doctrine seeks to ensure. In peacetime, crisis, and conflict, the U.S. Navy and NATO stand ready to be recognized as trusted brokers of SASON information.

The central location for AWNIS and NCAGS expertise in NATO is the NATO Shipping Centre (NSC), part of NATO Maritime Command in Northwood, U.K. Though tasked with wider maritime situational awareness responsibilities, the NSC should play a role in establishing AWNIS expertise in the U.S. Navy, bearing in mind that AWNIS is not only relevant to the littorals of Europe. The mine threat is equally existential, if not more so, in the Strait of Hormuz and Taiwan Strait.

With the AWNIS organization in place, military units at sea and merchant shipping could be confident in the U.S. Navy’s ability to manage SASON information during crisis or conflict. More importantly, the Joint Force Commander could be confident in the Maritime Component Commander’s ability to protect SLOCs and help both merchant shipping and strategic sealift make it to their destination, whether to support the civilian population or the Land Component Commander.

AWNIS is not the only NATO doctrine the U.S. Navy needs to practice, but it is fundamental. No longer can the crew of a destroyer wait until they “chop” under NATO operational control to dust off the NATO publications on the back shelf. As recently argued by VADM Lindsey and members of his staff at NATO’s Combined Joint Operations from the Sea Center of Excellence (CJOS-COE), U.S. Navy knowledge gaps in NATO doctrine need to be identified and filled to ensure successful integration and interoperability with NATO forces. The U.S. Navy’s mine warfare community is already ahead of other warfare communities in this endeavor, through participation in NATO exercises like DYNAMIC MOVE. Adopting AWNIS is a natural next step.

Lieutenant Barnard is serving as a staff operations and plans officer at NATO Maritime Command in Northwood, U.K. He was previously gunnery officer onboard USS ARLEIGH BURKE (DDG 51) and weapons officer onboard USS FIREBOLT (PC 10), and he was recently selected to be a foreign area officer in Europe. He graduated from the University of St. Andrews in Scotland with a master’s in terrorism studies and holds a bachelor’s in political science from Abilene Christian University in Texas. His views are his own and do not represent the views of the U.S. Navy or Department of Defense.

One thought on “The U.S. Navy Needs AWNIS for Mine Warfare”