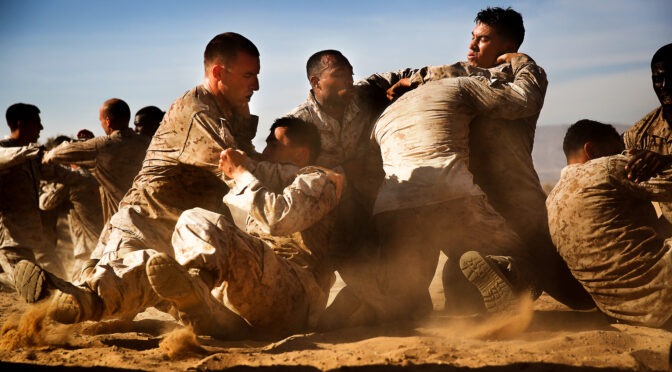 This article originally published on the Marine Corps Gazette and is republished with permission.

“If a unit is not well trained, its men know it. This fact adversely affects their confidence, especially if they anticipate there is a possibility of using that training in a critical situation. Every soldier likes to feel that he is playing on a winning team—he knows he can’t win if he isn’t well trained.” —Gen. Bruce C. Clarke, U.S. Army

It is through training—through constant realistic and repetitious training of individuals and units—that military organizations acquire the skills they need to succeed on the battlefield. Nothing peacetime leaders do is more important.

Gen. Clarke had a very clear picture of the crucial role individual and unit training played in determining the outcome of an armed conflict. The hallmark of the Marine is his superior preparedness for battle, and the proud heritage of our Corps rests on this very foundation of superior training and discipline. As the din of battle becomes more unknown to a “peacetime” generation of Marine officers, it becomes even more crucial that leaders produce realistic training evolutions that will ensure success on the battlefield and the survival of the young Marines in their charge.

Every Marine officer is by now familiar with FMFM 1, Warfighting and the move to dispel the “zero-defect” mentality from our training and daily operations. But in an increasingly competitive promotion environment, glowing after-action reports often become the ultimate objective of our training evolutions, and our tolerance for risky experimentation is dictated largely by our concern for our own career patterns. Is this an exaggerated description of our current philosophy toward unit training? Perhaps. But who among us can honestly say that our major training evolutions are not heavily influenced to ensure a “successful” outcome? If the Marine Corps is to continue to win on the modern battlefield, we must reexamine our definition of “successful” training and determine to what degree we are really preparing for war as opposed to only ensuring our next promotion. FMFM 1 has this to say about training:

“Exercises should approximate the conditions of battle as much as possible; that is, they should introduce friction in the form of uncertainty, stress, disorder and opposing wills…Dictated or canned scenarios eliminate the element of independent, opposing wills that is the essence of combat.”

While we would wholeheartedly agree with this basic tenet of preparation for war, again, who among us can say he has participated in major exercises where “success” was not artificially preordained?

On a larger scale, our major operations serve more as political vehicles than realistic simulations of conflicts we are likely to face. Year after year, we assault the same riverbed in the same locale during Exercise TEAM SPIRIT, with the ground combat element (GCE) headquarters already established ashore and dignitaries lining the beach. The Marine air-ground task force commander enjoys perfect command and control, for his communication battalion arrives 60 days beforehand to ensure it. Exercise GALLANT EAGLE kicks off in a similar manner, with I Marine Expeditionary Force headquarters comfortably nestled into Bear Mountain well before the start of “hostilities.”

While recent conflicts have proven the willingness of Third World nations (and the Soviets) to conduct chemical warfare, for how long has any Marine unit trained realistically in a simulated chemical environment? It can be argued that certain artificialities must be maintained on a large scale to provide training for subordinate leaders. Will tomorrow’s adversary, however, be so accommodating as to allow us to comfortably establish our major headquarters and perfect our command and control systems before the advent of hostilities? Will Third World nations shelve their electronic warfare assets because we have not trained in an electronic warfare environment?

Can we be sure that our real enemies in the world will not employ nuclear, biological, or chemical weapons against us, particularly when we know they have used these weapons extensively within the past decade?

While on the surface these questions may seem only rhetorical, we as leaders have failed in many ways to train and test ourselves and our Marines against some of the very obstacles we are almost certain to face. Regardless of our military occupational specialty (MOS), we can all reflect upon instances where we enjoyed artificial handicaps that ensured the right outcome for our exercises. George Allen, one of the most successful coaches in National Football League history, did not attain this distinction by constraining his defensive line during practice to ensure the success of his quarterback. Known for his grueling team training, Allen confronted his team with challenges during practice; this paid obvious dividends on the playing field. Is our training of Marines as rigorous and realistic as it could be, or do our exercises smack of “zero-defect” artificiality in the name of overall “success”? This is an important thought to consider, as our success on tomorrow’s battlefield will be measured not on a scoreboard but with the number of casualties we suffer.

Realistic training is just as vital on an individual scale as it is to the grandest of armies. The training of our Marines in individual combat skills is far superior to that received in most armies of the world, yet we must remember that the title “Marine” must be earned every day through continual training for combat. Two significant factors come into play here. First, the individual Marine must have the mental and physical toughness necessary to withstand the horrors of war. Second, the Marine must be so skilled in his MOS that his job will be second nature when it counts. FMFM 1 states that:

“any view of the nature of war would hardly be accurate or complete without consideration of the effects of danger, fear, exhaustion and privation on the men who must do the fighting…”

Although we must provide a safe training environment for our Marines, to what extent do we simulate environments of “danger, fear, exhaustion, and privation” to train in? Recent initiatives by the Commandant, such as Basic Warrior Training and the reinstitution of the School of Infantry for all new recruits, have done much to improve the training of Marines. But all too often we as leaders accept platitudes such as “You don’t have to practice being miserable” to rationalize making our training as painless as possible. But misery is guaranteed in combat, and the more a combatant is accustomed to it, the less it will affect him when his life is on the line.

Of course, training should not be sadistic, but dealing with cold, exhaustion, and adverse elements are skills just as valuable as marksmanship and MOS proficiency. While our defeat in Vietnam was largely due to political constraints, let us not forget the formidability of an enemy whose idea of rest and relaxation was a bowl of rice. Mental toughness cannot be developed in an environment of complacency, where those responsible for training are able to rationalize easing requirements. It is our mandate as leaders to give our young Marines the best chance to come home alive from combat. Coddling them with overly comfortable surroundings in training will not prepare them for the mental and physical challenges they must face.

In his classic Book of Five Rings, Miyamoto Musashi says, “It is a strength of [the warrior] to be able to fight on as usual because of day in, day out practice.” MOS proficiency, like any other learned skill, is a product of continual repetition. Yet how many times have we encountered Marines who were unable to perform rudimentary functions within their area of expertise? Is this their fault or have we failed as leaders?

It is incumbent on us to drill our Marines repeatedly; to have them perform the rudiments of their MOS again and again until all facets of their jobs become second nature. This is a lofty goal, yet one we must strive for. Going back to George Allen, his success rested on the superior training of the individual members of his team. We must all train our team of Marines with that same demand for constant drill and repetition; we pay a much heavier toll for defeat than does a football team.

To subject a unit to repetitious training under difficult conditions would do little to enhance our popularity within our own unit and would probably generate discontent within the ranks of the less disciplined. If world tensions lessen and the prospect of major conflict dims, it will become even more crucial that we as leaders prepare our Marines to fight and win under all kinds of adverse conditions.

Many nations throughout history have suffered terrible defeat because of the poor state of readiness they possessed on both the unit and individual combatant level. It may be difficult to equate the readiness of small units with the fate of a nation, but history has shown us time and again the cost of complacency. Let us not waste the lives of our Marines needlessly because of the political difficulties associated with training them for the realities they are almost certain to encounter in combat.

This article is not intended as an indictment of Marine Corps training as a whole, for our proud heritage continues whenever we are called upon. Nevertheless, we must always ask ourselves if we are really preparing Marines for the challenges they will face. Or do we become complacent, finding it easy to allow ourselves training artificialities that will make us “look good” in the eyes of our seniors? Who among us is willing to risk “failure” in a training environment full of the obstacles we are sure to face in real combat? Those of us who are willing to take that risk may not fare as well at promotion time, but we are more likely to bring our Marines home alive from the next war.

This article originally published in 1990, and won the 1990 CG MCCDC Leadership Writing Award under the title “To Keep Our Powder Dry.”