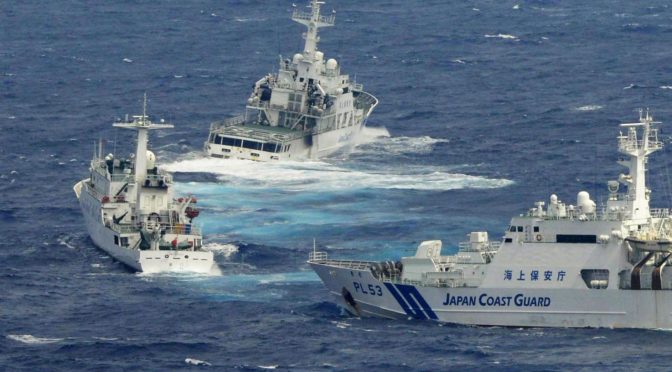 In August 2020 China lifted the annual summer ban on its fleet’s fishing in the East China Sea (ECS). Amid speculation that China may use the opportunity to assert its claim over the Japanese-controlled Senkaku Islands, U.S. and Japanese naval forces conducted a joint exercise in the ECS to deter China. While much focus is paid to the Chinese claim of sovereignty over the Senkakus (China calls them Diaoyu), the dispute over the islands is partially nested within a larger dispute over the broader Exclusive Economic Zone(EEZ)/Continental Shelf boundary dispute between the two countries. As such, the implications of the islands’ sovereignty over the broader maritime boundary dispute and the respective strategies of China and Japan warrant closer examination.

United Nations Law of the Sea (UNCLOS) Article 57 defines the limitation of exclusive economic zones (EEZs), which are permissible up to 200 nautical miles from the baseline or to the median line if claims from opposing coasts overlap. Meanwhile, UNCLOS Article 76 defines the extended continental shelf, permissible to the shorter of the end of the continental shelf or 350 nautical miles from the baseline. Japan cites the median line as the maritime boundary, while China cites the limitation of the extended continental shelf as the boundary. The two states’ claims overlap in approximately 81,000 square miles of water.

The Senkaku Islands reside within the overlapping maritime zones. While Japan is not using the Senkakus’ baseline for further pushing the median line EEZ claim northwestward, the islands’ location on the very continental shelf China is claiming is of legal-strategic value. Japan’s possession of the Senkaku Islands would not yield a Japanese claim (equal to China’s) to the same continental shelf, which would favor a median line boundary. However, a potential Japanese claim of an EEZ deriving from the possession of the Senkaku Islands would require a boundary adjustment over a broad area of a new overlap. All this, however, is contingent upon the extended continental shelf limitation being in principle adopted as the maritime boundary.

It is not likely that China’s claim of the extended continental shelf boundary becomes an internationally recognized boundary over the Japanese claim of the median line. Extended continental shelf claims have been recognized when they were undisputed, and any dispute must be first negotiated between the concerned parties. China is exploiting natural gas from the ECS seabed, but it has stopped short of digging inside the Japan-claimed EEZ. Some rigs are close to the median line, and Japan since 2005 has demanded the sharing of geological survey data to ensure gas is not siphoned from the Japanese side of the median line. China has refused sharing data and instead in 2008 agreed to “joint development” of the Chunxiao field. However, the terms of “joint development” were never agreed upon, and China has unilaterally operated Chunxiao and other new fields along the median line since then. A Chinese proposal to jointly develop another field inside the Japan-claimed EEZ was rejected by Japan.

The significance of the Senkaku Islands is thus their relevance to the broader maritime boundary disputes in the ECS due to their location inside disputed waters.1 This is in contradiction to the commonly held view that the dispute over the islands themselves generates a proximate EEZ dispute.

China’s strategy is that it challenges Japan’s administrative control (wherever and whenever it can without starting a physical conflict) in order to register its “evidence” of administrative control. The level of presence of Chinese Coast Guard vessels inside the territorial waters of the Senkaku Islands set a new record in 2020. On one occasion, a Chinese vessel pursued a Japanese fishing vessel, inviting a Japanese Coast Guard vessel to place itself in between them in order to prevent an interdiction.

Chinese presence inside the contiguous waters (24 nautical miles) around the Senkaku Islands has been more frequent, but the legal implications are far less tangible. The types of permissible control inside contiguous zones are limited to “customs, fiscal, immigration or sanitary laws and regulations” (UNCLOS Article 33), which are largely irrelevant to the uninhabited Senkakus. Outside the territorial waters of the Senkaku Islands, interdicting Japanese fishing vessels within the broader overlapping claims would run a greater risk of Japanese reactions because doing so would violate the explicit bilateral agreement to limit themselves to law enforcement against their own respective national registered vessels within the disputed waters. China has thus far abided by this agreement.

The two countries’ strategies are mutually deadlocked. The dilemma China faces is that while the presence of the Senkaku Islands under Japanese control potentially weakens China’s extended continental shelf claim, challenging Japanese control of the Senkakus will likely push Japan to resort to international legal arbitration over the sovereignty of the Senkakus and the overlapping claims in the broader ECS. That would raise the stakes and the risks of losing for China. The present deadlock over the ECS, under which China exploits energy resources and fisheries with little constraint, has allowed China tangible economic benefits. Japan, on the other hand, has attempted to defuse Chinese pressure on the Senkakus by not pushing the ECS boundary issue too hard, while retaining this card.

Yoichiro Sato is a professor at Ritsumeikan Asia Pacific University in Beppu, Japan.