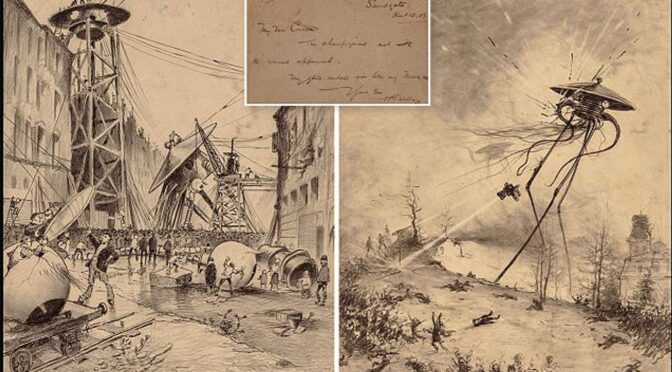 Bodies are strewn across the rolling, sunlit fields — each one clad in the scarlet tunics and bearskins of British Guardsmen — each one “marking the line of their victorious advance.”1 But their victory is a brief one. Hostile reinforcements are pouring in, quickly mounting a flank attack of their own. Chaos follows, and with it a desperate retreat. By morning, the corps commander is dead, the household cavalry is broken, and a battalion of 500 British soldiers is reduced to 180 men.2

But this military disaster is not in some far-flung corner of a foreign land; the British Army is retreating from the southern English town of Dorking, with the German Army hot on its heels. Having swept the Royal Navy aside with decisive new weaponry, the Germans have now also broken the back of Britain’s ill-prepared Army. Almost overnight, Britain loses its Empire and dignity alike.

At least, that is how Colonel Sir George Tomkyns Chesney thought events would occur.

Writing in 1871, Chesney serialized his thought experiments in Blackwood’s Magazine; the result was The Battle of Dorking: Reminiscences of a Volunteer. The story reflected Chesney’s abiding fear that “if serious military reform was not undertaken and the Germans ever got across the channel, England was doomed.”3 While overshadowed by a better-loved cousin — The War of the Worlds, for the writing of which H.G. Wells borrowed directly from Chesney’s earlier work4 — Dorking defined an entire genre: future-war fiction.5

As for Blackwood’s? Chesney’s story “was the best business they had ever had.”6

And it is easy to understand why. “Humans connect over a story,”7 explain authors Peter Singer and August Cole, the writers of 2015’s Ghost Fleet: a Novel of the Next World War. Or, as explained by Max Brooks, author of the 2006 novel World War Z: An Oral History of the Zombie War: “The best way to educate is to entertain.”8 Fiction offers a direct line to the imagination and the interest of countless ordinary readers. Such was the scale of Chesney’s appeal that his work attracted the personal denunciation of then-Prime Minister William Gladstone, whose ministry was determined to avoid further defense spending.9 Now ask yourself, how many Prime Ministers have been compelled to denounce the House of Commons’ Defense Committee reports?

Singer and Cole’s Ghost Fleet — inspired partly by Brooks’ zombie epic10 — depicts Sino-U.S. warfare from the beaches of Hawaii to low-earth-orbit. Moreover, it illustrates the power of stories as a vehicle to educate and inspire. Ghost Fleet popularized a tidal-wave of what co-author Cole terms ‘FICINT,’ which is fiction writing grounded in reality.11 Military organizations from the U.S. Naval Institute12 to West Point’s Modern War Institute13 now host regular FICINT initiatives, while the French Defense Innovation Agency recently hired sci-fi authors to identify future threats.14 Ghost Fleet itself quickly landed on the reading lists of the Chief of the Air Staff of the Royal Air Force;15 the U.S. Navy’s Chief of Naval Operations,16 and the U.S. Marine Corps War College.17 Not to be outdone, Admiral James Stavridis, former NATO Supreme Allied Commander Europe, recently made his own contribution to the genre.18

So much for the appeal — but what use is science fiction in an age of flat or declining defense budgets? History offers some pertinent clues.

Writing in 1925, a former MI5 agent called Hector Bywater released The Great Pacific War: A History of the American-Japanese Campaign of 1931–33. Bywater not only predicted World War Two’s famous American island-hopping strategy, but directly shaped it by prompting a rewrite of War Plan ORANGE — the American inter-war plan for a possible Japanese conflict.19 Likewise, in 1978, General Sir John Hackett released The Third World War. Hackett, who jumped into Arnhem at the head of 4th Parachute Brigade, wrote for reasons that echoed Chesney’s from over a century before: namely, to warn that if “we wish to avoid a nuclear war we must be prepared for a conventional one.”20 And even if Tom Clancy’s later novel, Red Storm Rising, has since come to define the fictional vision of hard-bitten Cold War combat, it was The Third World War — with over three million copies sold — that helped to drive the substantial reforms for which Hackett had argued.21

The western militaries of yesteryear were no strangers to sweeping changes in technology, nor the daunting threat of war with advanced, capable opponents. And now that their successors grapple with mounting threats ranging from the Baltics22 to Taiwan,23 they too are leveraging the power of fiction to educate and inspire — to reveal risks and opportunities. Not long ago, in the nineties and early millennium, the results were often fanciful. Whether in visions of U.S. armored divisions rolling across Siberia to crush Chinese troops wholesale,24 or laser-armed B-52s picking off Russian nuclear bombers,25 it is all too easy to find the hallmarks of that heady, hubristic era — back when Fukuyama called time on history and President Bush declared Mission Accomplished. And while some recent fiction on future warfare is overtly pompous and politicized — consider Omar El Akkad’s American War — a body of far greater work is growing — see, for example, Captain Dale Rielage’s award-winning How We Lost the Great Pacific War,26 which captures a trend of material that is at once both engaging and often deeply sobering.

And so it should be. Just as Wells’ anonymous narrator recounts of the Martian aftermath — that it robbed the world “of that serene confidence in the future which is the most fruitful source of decadence”27 — it is not a moment too soon that we leave behind the comforting anachronisms of yesteryear.

But if Western defense communities accept this already, what about the rest of us? Whether British politicians defending ties to China,28 Disney executives dismissing the Uyghur genocide,29 or EU negotiators overlooking slave labor,30 many elites need a hard dose of fiction to find their way back to reality. Closing the Battle of Dorking with a portrait of a desolate, occupied Britain, Chesney leaves his readers with the observation that “a nation too selfish to defend its liberty could not have been fit to retain it.”31 150 years may have passed, but Chesney’s fictional warning remains as pertinent as ever.

Hal Wilson is a member of the Military Writers’ Guild who specializes in using fiction to explore future conflict. His published stories include finalist contest entries with the U.S. Naval Institute, War on the Rocks, and the Atlantic Council’s Art of Future Warfare Project. He lives in the United Kingdom, where he works in defense. He can be found on Twitter at @HalWilson_

[18] 2034: A Novel of the Next World War, by Elliot Ackerman and Admiral James Stavridis, USN. https://www.penguinrandomhouse.com/books/635212/2034-by-elliot-ackerman-and-admiral-james-stavridis/

Featured Image: Original drawings by Henrique Alvim Corrêa for the 1906 edition of HG Wells’ The War of the Worlds.

One thought on “The Past and Future Wars of Fiction”