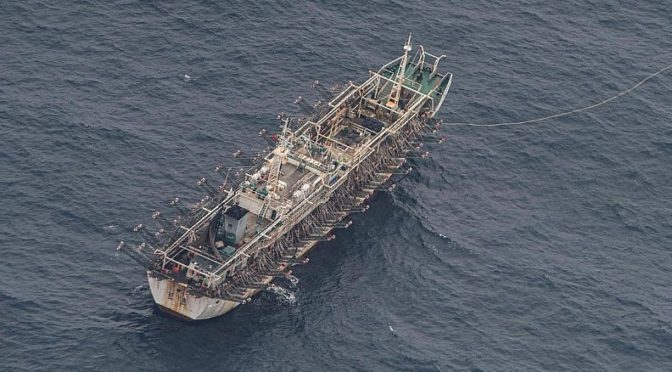 According to Ecuadorian authorities, a fleet of some 340 vessels is operating through a corridor of international waters between Ecuador’s EEZ and the Galapagos Islands. Defense Minister Oswaldo Jarrin has stated that the Ecuadorian government has been aware of the fleet for over a month, as it traveled from south to north from Peru. As of 7 August, the Ecuadorian navy has deployed corvette Manabi (CM-12), with a helicopter aboard, and the coastal patrol boat San Cristobal (LG-30) to monitor the fleet. Additionally a CASA aircraft, assigned to the navy’s air wing, has carried out surveillance operations.

Several vessels have been identified as originating from China, which has prompted some media outlets to generalize it as a “Chinese fishing fleet.” Quito has stated vessels have come from other countries as well, but without specifying which ones. It is well-known that fishing fleets from Japan, South Korea, and Taiwan also operate in the South Pacific, hence it is likely that some vessels come from these nations as well. Given that this is a fleet numbering in the hundreds of vessels, it is likely a mixed bag of nationalities.

How to Defeat IUU Fishing?

When it comes to IUU fishing, as this author has discussed in other commentaries for CIMSEC, (see “Latin American Navies Combat Illegal Fishing,” and “A Growing Concern: Chinese Illegal Fishing in Latin America”) this is a problem of “levels” for Latin America. What is meant by this is that the first level focuses on domestic IUU fishing (a vessel fishing within its country’s territorial waters), then at the regional level (ships registered in one country operating in the waters of another country), and finally at the extra-hemispheric level (the presence of extra-regional fishing fleets).

Thus, while the large international fleet close to Ecuador is making global headlines, this is not the sole incident currently taking place in the region. In fact, while eyes are focused on the South Pacific, the Uruguayan Ministry of Defense has reported that a fleet of approximately 19 Brazilian fishing vessels are operating without permission in its territorial waters as well. Uruguayan and Brazilian authorities are discussing this issue. While 19 ships will not be as destructive as 340, the problem is still significant.

Regional governments, ministries of defense, and navies regularly explain their strategies to combat IUU fishing. Unsurprisingly, much attention is given to greater cooperation between defense ministries and armed services, and to a large extend, this is occurring. For example, the Permanent Commission for the South Pacific (Comisión Permanente del Pacifico Sur: CPPS), which has Chile, Colombia, Ecuador, and Peru as members, issued a declaration on August 5 calling for greater cooperation and exchange of information to address the presence of international fleets in the region and the dangers of overfishing. Moreover, the U.S. National Security Council  also tweeted its support for Ecuadorian President Lenin Moreno, stating, “The United States stands with President @Lenin and our friends and partners in #Ecuador against any aggression directed toward their economic and environmental sovereignty.”

As for partnership between navies, this is also taking place. An interesting example occurred in 2018 in the Caribbean when the Royal Bahamas Defence Force (RBDF) chased three fishing vessels for illegally fishing in Bahamian territorial waters. The ships crossed into Cuban waters to escape their pursuers, but Cuban authorities located these ships, apprehended them, and turned them over to the RBDF. This is an important example of international cooperation to combat a crime that respects no borders.

There is also greater reliance on technology, such as satellites, to locate and monitor suspicious vessels, and to figure out their ports of origin, which is what the Ecuadorian government states it has done. In other words, regional navies and other agencies are making positive announcements, and there are sufficient examples of successful interdictions and international partnerships. But alas, the problem continues.

One obvious issue has to do with numbers, namely how many vessels and supporting aircraft can Latin American and Caribbean navies deploy to combat this crime. Regional vessels routinely carry out myriad tasks at sea, including combating IUU fishing, drug trafficking and smuggling, in addition to carrying out search and rescue operations, support operations to coastal communities, in addition to routine patrols and even unconventional missions. While the Ecuadorian navy is monitoring the international fishing fleet, the service reported on July 20 that naval personnel, along with fishermen and representatives from the Ministry of the Environment, freed a whale that got stuck in a fishing net in the Tonchigue area. Vessels also have to be docked to undergo maintenance or upgrades, which can put them out of commission for extended periods of time.

To be fair, Latin American navies are obtaining new equipment that can be utilized to combat IUU fishing. Case in point, Argentina’s newest Offshore Patrol Vessel Bouchard (P-51), acquired from France, has already successfully stopped a Chinese fishing vessel in its territorial waters this past May. Similarly, Peru recently launched two new domestically manufactured OPVs, Río Tumbes and Río Locumba, which will be very helpful for combating maritime crimes.

As for Ecuador, a very noteworthy development occurred recently, where in late July the Ecuadorian navy commissioned a new support vessel, BAE Hualcopo. What is remarkable about Hualcopo is its background: the vessel used to be known as Fu Yuan Yu Leng 999, and it was detained in 2017 by Ecuador for operating without authorization by the Galapagos Islands as part of a large Chinese fishing fleet. Upon inspection, authorities found aboard the vessel around 300 tons of fish, including endangered sharks. In 2019, as part of a lengthy legal process, Ecuador’s judicial system (Corte Nacional de Justicia – CNJ), ruled that the vessel was permanently forfeited, and it was eventually transferred to the navy. Now Hualcopo will carry out support operations for the Ecuadorian navy and may very well be involved in stopping the same IUU fishing activities that it carried out in its previous life.

Hualcopo raises an important issue, namely the fate of vessels that are seized as part of the war against IUU fishing. Personally, this author has not heard of other navies gaining control of vessels detained for IUU, hence Hualcopo may set an interesting precedent. Certainly some detained vessels may be too old or incompatible with a navy’s requirements and operations, but others could be given a second life, particularly large ships that can be utilized for transportation.

Regional navies have enjoyed plenty of successes, and many are upgrading and expanding their fleets, even by re-purposing a one-time fishing vessel, namely Ecuador’s Hualcopo. However, the sheer size of some of these fleets engaging in IUU fishing dwarfs most regional and global navies. For example, while a fleet of 19 Brazilian vessels is not as large as a fleet of 340, it is sizeable enough to be a challenge for the Uruguayan navy, which is known for its aging fleet.

The international fishing fleet currently operating close to Ecuador’s territorial waters will certainly not be the last. Because of their maritime biodiversity and limited naval and aerial platforms, Latin American and Caribbean waters will remain viable arenas for IUU fishing.