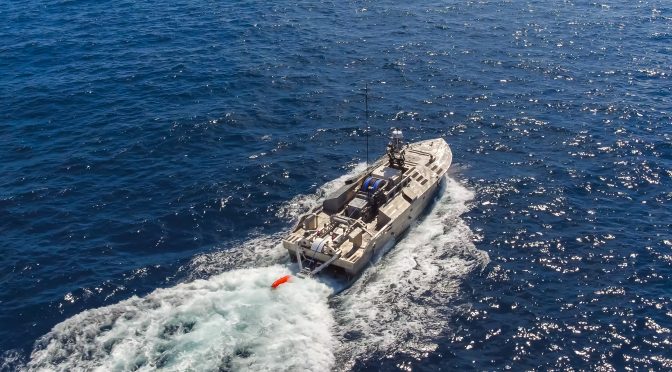 As U.S. naval forces further develop and implement distributed maritime operations concepts to address great power competition with Russia and China, more ships spread across wider distances will be required. This, in turn, will lead to a changing fleet composition with larger numbers of small ships and vessels of all types, as well as provide the additional required logistical support over expanded distances. Far greater participation of unmanned surface vehicles (USVs) of all types will be needed as a part of this new construct due to budgetary necessity and operational imperative.

While new unmanned ships, such as those planned under the Medium USV and Large USV programs, are expected to be fielded in the dozens, smaller unmanned vessels and craft numbering in the hundreds can play vital complimentary rolls. Already, the Navy has USV programs underway that will help remove humans from dangerous operational environments, such as minefields. Additionally, concepts are under development for similar platforms to extend the fleet’s reach through a range of networked sensors and weapons.

The quickest, best value, and lowest risk path forward to developing long-term solutions for new missions is to adapt existing, proven, and already paid-for unmanned vehicle designs by swapping out their mission-specific equipment. The idea is to use a common unmanned vessel that can easily and quickly incorporate a variety of payloads for diverse mission sets, or haul people and material in the payload bay area.

In the case of the Textron Systems’ Common Unmanned Surface Vehicle (CUSV), which was selected under competition as the platform for the Navy’s Unmanned Influence Sweep System (UISS) program, payloads are rapidly interchangeable. Much like a standard International Standards Organization (ISO) shipping container that can be quickly moved via crane onto and off of a tractor trailer, the CUSV uses ISO locks and standard electrical interfaces so that payloads can be changed rapidly, allowing mission flexibility. Unmanned craft such as the CUSV, which offer large amounts of electrical power as well as 5,000 pounds of payload capacity, can serve as the basic “trucks” for carrying a wide variety of potential mission packages that are tailored for specific tasks.

To date, naval plans for such USVs have been limited to the mine-countermeasures (MCM) mission areas, with the UISS initially intended for mine-sweeping. With that program being subsumed into the MCM USV program, mine-hunting payload options are being added and mine-neutralization equipment is being envisioned, which would facilitate the entire detect-to-engage process in a single MCM sortie.

While taking the man out of the naval minefield was a natural first mission to address, U.S. naval forces have only begun to scratch the surface of what USVs of all sizes can accomplish. In 2017, Textron Systems and the Naval Surface Warfare Center-Dahlgren established a Cooperative Research and Development Agreement (CRADA), which allows for the exploration of advanced missions, concepts, and capabilities. Initial explorations have evaluated different payloads for a Surface and Expeditionary Warfare Mission Module that could counter fast-attack craft and swarming boats, as well as provide armed escort. Payloads, such as an integrated remote weapon station (RWS) armed with .50 caliber machine gun, have already shown during mock intercepts that the craft can identify, lock, and maintain a fix on a moving target. Integration of a Hellfire missile is planned, and other lethal payloads such a 30mm cannon, low-cost loitering munition, or even larger systems like the Naval Strike Missile, could be considered.

Such capabilities would allow the USV to support a wide array of missions. For example, a USV carrying a mix of armament, such as .50 cal RWS, combined with non-lethal capabilities would give operators a range of engagement escalation options during the conduct of harbor patrol, port security, or counter-piracy escort duties. For more stressing force protection, armed interdiction and escort missions, those payloads could be exchanged for a launcher carrying Hellfire missile or other armaments.

The craft does not need to carry a mission package to be useful. Its empty payload areas can haul cargo for resupply and logistics – a capability that will be in greater demand as part of distributed operations. Similarly, a USV in “cargo configuration” could be of significant utility during humanitarian operations, delivering supplies to needy areas, and evacuation of people under duress.

With significant excess onboard power and substantial available space and weight, such USVs could also be equipped to conduct electronic warfare; pull an anti-submarine warfare sensor array; host intelligence, surveillance and reconnaissance sensors; or carry a communications relay payload. This is just the beginning of exploring the art of the possible. The best way to quickly determine the most promising technologies and concepts is to get a number of the craft into the water for experimentation.

Consideration needs to be given regarding how a CUSV-sized craft can support a variety of new roles and missions. Although the MCM USV program envisions the craft as being initially operated from the LCS, recent demonstrations have shown such USVs are not limited to just that class. In fact, the Royal Fleet Auxiliary Ship Mounts Bay successfully operated the CUSV during a recent naval experiment. The USV can also been deployed off the shore, as well as from additional platforms which have a crane or wet dock. For example, the CUSV has demonstrated this concept operating off the Expeditionary Transfer Dock USNS John Glenn.

While a forward operating base or mothership is needed for the craft of this size to be forward deployed, several options are worth considering. Depending on the specific mission profile, such craft typically operate for approximately eight-hour sorties between refueling. Additionally, refueling does not need to be provided by specific manned ships, but could instead come from a wider variety of places. Imagine, for example, a future destroyer escorted by 10 to 20 armed USVs operating as part of a distributed operating concept. Each of those USVs could, in turn, be a mothership for additional smaller unmanned craft (unmanned aerial systems, unmanned underwater systems and USVs), that are netted together to create a truly layered defense. These smaller craft, if autonomously refueled, including by the larger medium and large USVs, could potentially stay on station for days, weeks, or even months without needing to return to port.

The basic building blocks of AI technology that will enable such operations already exist. USVs have demonstrated during naval experimentation that they are fully capable of autonomous navigation and seakeeping operations, collision avoidance, and International Regulations for Preventing Collision at Sea (COLREGs) compliance, and that evolution continues. At the upcoming Advanced Naval Technology Experiment (ANTX) at Camp Lejeune this summer, the CUSV will be put through its paces to demonstrate that these craft possess operational maturity in their ability for autonomous basic operations, as well as advanced concepts such the hand-off of control of the craft to another platform to test manned-unmanned teaming concepts.

Improvements and evolution of AI technology will add capabilities to these craft in many areas. It will help increase the level of autonomy in the craft such that it can be operated without need for human intervention in its basic movements and navigation. This will, in turn, reduce the operational burden on a craft operator and could lead to additional manpower reductions. While most missions will require one person to operate the vessel and another operator for the payload, decision tools enabled by AI could make a single operator feasible.

Consider, for example, how commercial companies like Waymo plan to use a controller to oversee a fleet of road vehicles. Future control technologies could also enable one operator to control multiple craft simultaneously, allowing their teammates to focus on the payload sensor or weapons. These control technologies do not have to be restricted to USVs. Textron Systems’ Synturian family of multi-domain control and collaboration technologies can control craft such as CUSV, as well as various unmanned aircraft systems, raising the possibility of seamless control for a multitude of different systems.

Advances in AI will also be vital in providing USVs with self-diagnostic technologies for predictive maintenance. Combined with increase component reliability, these technologies will enable craft to go longer between maintenance periods while more predictably knowing when that maintenance is needed. Such logistical schemes, in additional to autonomous refueling, are a key to the future ability of USVs to stay on station for longer durations.

Technological advances, fiscal pressures, and rising peer competitor capabilities suggest that the Navy must adapt its core warfighting strategies and concepts, and a changing fleet composition to one that uses unmanned platforms of all types and sizes to a greater degree. For all the excitement that USVs and the attenuate technologies bring, the details of how best to leverage those vessels are still in their infancy. Experience has repeatedly shown that the best way to generate and test new warfighting concepts ideas is through experimentation, specifically done at sea by Sailors themselves. Fortunately, the Navy has the Other Transactional Authorities (OTA) mechanism at its disposal, a ready-made and proven means to quickly procure prototypes for such experimentation while longer-term concepts and requirements are refined.

Specifically, getting USVs of all types into the hands of Sailors and planning for increased experimentation will provide insights into key questions such as which missions the various unmanned craft should undertake, and how those vessels best fit into the wider naval tactical and operational construct. Development of those new doctrines, strategies, and tactics is needed, and with rapidly developing technologies and capabilities of potential adversaries, we no longer have the luxury of time to go through the traditional, decade-long requirements and acquisition process just to get the first iteration of new systems to the fleet for experimentation.

While it is encouraging to see Navy plans to move quickly to bring initial Medium and Large USVs into the fleet, other unmanned platforms are equally ready for such an approach. Innovation is the key to shaping tomorrow’s Navy, and getting USVs of all shapes and sizes to the fleet for Sailors to try out is the best approach to achieving it.

Wayne Prender is Senior Vice President of Applied Technologies & Advanced Programs (ATAP), as well as a member of the Textron Systems Executive Leadership Team. Prior to assuming his current position, Prender served as Vice President, Control & Surface Systems for Textron Systems’ Unmanned Systems business, focusing on programs including the Common Unmanned Surface Vehicle (CUSV), Cased Telescoped (CT) weapons and ammunition, and Command and Control (C2) Technology programs. He also served in the U.S. Army as a Platoon Leader, Shop Officer, Battalion Intelligence Officer in Iraq, where he was awarded the Bronze Star, and Aide-de-Camp for the Commanding General of the U.S. Army’s 20th Support Command (CBRNE). Prender holds a Bachelor of Science degree in Mechanical Engineering from St. Louis University, and a Master of Science degree in Technology Management and an MBA from the University of Maryland (UMUC).