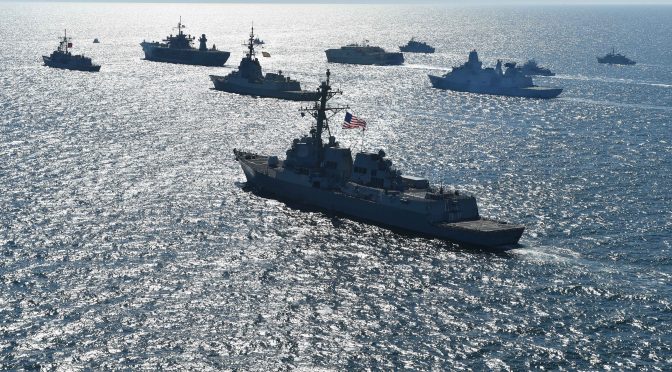 By Sebastian Bruns and Julian Pawlak

“The Baltic Sea has grown to a never-seen strategic significance in the past years.” This is how Vice Admiral Andreas Krause, former Chief of the German Navy (2014-2021), described the current situation of what is sometimes referred to as a ‘flooded meadow’ in naval circles. This nickname for the Baltic Sea originated as a description for the marginal and shallow basin that characterizes the operating environment, but has also been used to describe the relative calm of this theatre between 1991 and 2014. It is remarkable that Krause, who joined the West German Cold War Bundesmarine as a career submariner, would attribute an even larger strategic role to the contemporary Baltic  than during the superpower confrontation.

In any event, almost 30 years since the end of the Cold War, the era of reconciliation has definitely come to an end. Russia’s aggressive foreign policy and spill-over effects from the war in Ukraine were met with a more robust NATO posture in the Mare Balticum, which by virtue of its geography is a maritime, not just a naval arena. The Baltic is once again at the forefront of the security policy agenda of its neighboring countries and the North Atlantic Treaty Organization. It now appears that German naval forces in particular intend to do justice to the area of responsibility, driven by the Deutsche Marine’s role in the security and defense of the Federal Republic as well as its position as the largest allied navy in the Baltic Sea.

As early as 2015, the Baltic Commanders Conference (BCC), a consultation format, was launched in response to altered security policy constellations and was intended to strengthen communication and cooperation between the neighboring navies – including non-Baltic state Norway, but without Russia.

The German Maritime Forces Staff (DEU MARFOR), established in 2019, bundles together the previous smaller task forces in Germany and, with German and international posts, will form the core staff of the Baltic Maritime Component Command (BMCC), which is currently being set up. From 2025 the German Navy intends to develop key maritime skills with the BMCC and seeks to be able to take over the tactical leadership of multinational units in the Baltic, the North Sea, and the North Atlantic. For this purpose, NATO’s unique “Baltic Sea Headquarters” will be offered as a command center for national and allied defense operations on the northern flank.

Regionalization efforts show how the German Navy recognizes the Baltic as a special area of responsibility. Developing key skills and institutional measures will allow the Deutsche Marine to meet the expectations of its substantial role as a reliable force provider. However, by also emphasizing supra-regional and global operations, the Deutsche Marine will by no means be reduced to a “Baltic Sea Navy.”

From Marginal Sea to the Magnifying-Glass

The Baltic Sea may be a geographically marginal European sea, but Baltic security policy affects the interests of the entire continent. The regular participation in exercises and ship visits, for example, by the British Royal Navy, the Benelux naval forces, or French and Spanish units, are only the most visible signs of a development which, by the way, is entirely in the tradition of the East-West conflict in the Cold War. In the 1960s and 1970s, interested parties in East and West floated the idea of turning the Baltic Sea into a “sea of peace.” The consequence of this would have been the separation of the sea area from overall strategic security policy. It would have turned the Baltic into a closed sea, undermining international law– and essentially forbidding third countries’ navies to enter. NATO naval activity in the Mare Balticum would have been prevented. This was one of the reasons for the emergence of the annual US BALTOPS naval exercise, conducted in the Baltic since 1971.

Since 2014, the Baltic Sea has been the scene of the politics that articulated the NATO Maritime Strategy (2011) and the European Union’s Maritime Security Strategy (2015), including the corresponding Action Plan. For allies and the alliances, there is a need for a maritime presence, naval diplomacy and international cooperation, but also for conventional deterrence and the regaining of high-end warfighting capabilities as far as NATO members are concerned. This is three-dimensional: on, above and below the waves. In addition, it must not be overlooked that the Baltic Sea also has a naturally important economic role for Europe. The quintessential NATO and EU lake is one of the busiest of its kind in the world.

In addition to numerous passenger, vehicle, and rail ferry connections, the Baltic hosts feeder traffic with its ships, the landside ports and their hinterland connections, and a wide range of leisure shipping. The cruise industry in Northeast Europe was booming pre-COVID-19 and ever larger ships were vying for space with heavily loaded tankers, bulk cargo, and container carriers in the sometimes difficult to navigate waters. The Kiel Canal is the most traveled artificial waterway in the world (by number of ships), and has lost little of its validity in the wake of the pandemic.

Biodiversity is also on the agenda of the Baltic Sea experts, at least those in the EU, who have adopted a maritime approach to security versus NATO’s more focused naval one. The Baltic Sea is a habitat and natural space worth protecting, which in turn makes regulation sensible. In addition, much attention has been raised for unexploded ordnance on the seabed and for World War-era weapons dumps. The continuing need to map, dispose of, or recover ammunition and weapons from that period from the sea floor even eight decades later might bring attention to more contemporary Baltic naval matters, or could obstruct a proper 21st century response to challenges all the while.

In this policy cacophony, the sometimes-conflicting interests of member states and neighbors cannot be concealed—just think of the controversial North Stream 2 gas pipeline, which is to connect Russia with the Federal Republic of Germany in the future. To say that the pipeline has affected German standing in the West led by the United States is an understatement. Compared to its predecessor, the Biden administration has moderated the tone of its criticism of the project, but not the substance.

The U.S. is also critical of the dependence on Russian raw materials and the resulting strategic implications. Washington, which would prefer to see US-funded liquefied petroleum gas replacing the Russian equivalent in Europe, is concerned about the monetary and political advantage for Moscow. Whilst a significant part of German politics still refers to the pipeline as a “purely economical” project, it does not change the geopolitical reality the global great power competition bears on the region.

Shortly after the Biden administration took office, the New START arms control treaty was extended for another five years, giving the time to create a new contract between the parties, consequential also for the region’s strategic security. Despite the increasing demand of U.S. presence in the Asia-Pacific region, supporting the European security and defense fundament is a continuous task for the new American president. Engagement in European defense is vital not only to repairing transatlantic relations, but also to fortifying the Western deterrence pillar.

In that regard, the US armed forces have increasingly focused on the Baltic Sea and north flank areas. US Marines have been training in inhospitable northern Norway, the Army is supporting NATO’s “Enhanced Forward Presence,” Air Force B-52 bombers are practicing deploying naval mines, and the US Navy is regularly showing increased presence in the region.

The establishment of the US Second Fleet in Norfolk, Virginia, and the corresponding NATO commands on both sides of the Atlantic underscore that the Baltic Sea, as part of the alliance’s northern flank, must be viewed in global terms.

Incidentally, there should also be consensus in China. In 2017, the People’s Republic Army Navy (PLAN) carried out naval exercises with Russia in the Baltic.1 The maritime presence here is evidence of Beijing’s global interests and increasing naval reach, which are also manifested in extensive strategic economic activities in Northeast Europe. Knowing about the universality of the maritime domain, China uses the Baltic Sea as a showcase of power and for training the operational and strategic skills of its navy. So far, “return visits” in the South China Sea have mainly been reserved for the Anglo-American maritime powers and—according to the declaration of intent—France. Germany’s first deployment to the region is scheduled for the late summer of 2021. It is obvious that the Las Vegas law does not apply to the Mare Balticum: what happens in the Baltic Sea does not stay in the Baltic Sea.

To implement the prerequisites for credible national and alliance defense for the allies involved, armed forces and political decision makers should not only postulate politically “joint & combined,” but courageously promote overarching cooperation and integration. This ranges from joint exercises and maneuvers, to procurement measures and training, to the powerful and innovative set-up of true multinational units.2

With regard to the exercises in the region, a European BALTOPS counterpart could be considered: on the one hand, to strengthen the European capability development, which is also regularly brought to the fore politically, on the other hand, to practice high-intensity conflict scenarios beyond a single major maneuver. This can be expanded with the joint preparation for high intensity warfighting (especially with air forces).

Joint procurements are primarily available in the area of mine defense associations and in maritime domain awareness. The expansion of already existing joint procurement and training programs, such as the submarine cooperation between Germany and Norway and the planned cooperation programs between the Federal Republic and Poland, offer further points of contact.

The challenge for Germany is to punch at its weight in NATO and the EU while achieving the domestic majorities needed for its military and defense policy. Germany also must balance Baltic Sea responsibilities with the larger (and further afield) tasks in the North Atlantic and the Mediterranean, and its Indo-Pacific aspirations. At the same time, however, due to the large number of neighboring and partner countries, it is precisely the Baltic Sea which offers equally wide-ranging opportunities for cooperation.

Regional developments will continue to require maritime security in the future, even if the narrative – such as the VJTF (Very High Readiness Joint Task Force), whose leadership Germany will take over next time in 2023—is land-centric. The Deutsche Marine is undertaking a remarkable effort to refashion its political and operational core skills towards the traditional fields of national and alliance defense (and away from exclusively looking at maritime security and humanitarian assistance). This also sends an important signal to the friendly states in the regional and transatlantic context. A lot of porcelain was broken here by the North Stream 2 and the Trump-era blame game for the amount of the German military contribution (where a more honest conversation about the measurements of German defense – beyond a percentage of GDP – should have happened). Both nationally and internationally, the Federal Republic is well advised to act as a reliable ally with a coherent political agenda. This underlines Germany’s role in the EU and NATO, but also in its ambitions in the United Nations.

Dr. Sebastian Bruns heads the Center for Maritime Strategy & Security (CMSS) at the Institute for Security Policy Kiel University (ISPK). Julian Pawlak is a research associate at the German Institute for Defence and Strategic Studies (GIDS) and the University of the Federal Armed Forces Hamburg. An earlier version of this article appeared in the German monthly journal MarineForum, June 2019.

One thought on “The Baltic Sea is not Las Vegas: The Mare Balticum in Broader Context”