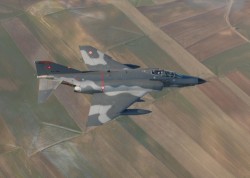 Turkey convened a meeting of the North Atlantic Council earlier today where Turkish officials presented their version of events. As expected, the outcome was one of condemnation but no immediate military response. Following the meeting, NATO Secretary-General Anders Fogh Rasmussen expressed solidarity with Turkey and condemned the shoot-down “in the strongest terms.” NATO also released a statement with unanimous endorsement calling the incident, “another example of the Syrian authorities’ disregard for international norms, peace and security, and human life.”

The past two weeks might mark a new low for relations between Turkey and Syria, but it does not mark a turning point in the Syrian conflict itself, which drags on and on.

Syria allegedly engaged a second Turkish aircraft. According to a TV statement on Monday by Turkey’s deputy prime minister, Bulent Arinc, a Turkish CASA searching for the wreckage of the F-4 came under fire by, who ceased when warned by the Turkish military. As the wreckage of the craft was reportedly found Sunday, it is unclear when the plane came under fire or what shot at it. Also unknown is if the rescue craft was in fact hit, but it was not brought down.

Turkey officially responded Sunday to Friday’s downing of a jet by Syria stating that the jet had been over international airspace at the time. Turkey’s foreign minister, Ahmet Davutoglu disagreed with earlier Syrian assertions that the plane was not identified as Turkish, and said it had strayed into Syrian airspace but quickly left after it was warned. He also claimed the jet had been on a training mission.

Al-Jazeera quotes Turkish news channels that search and rescue crews have located the aircrafts’ wreckage in Syrian waters. Still no word on the fate of the crew or whether a second Turkish plane had been involved and received damage. Turkey has requested consultation with its NATO allies and will meet in Brussels on Tuesday with the North Atlantic Council to present its findings and formulate a response. As we reported earlier, Turkey is unlikely to invoke Article 5 of NATO’s founding Washington Treaty.

Syria has shot down a Turkish F-4E, according to a statement from the office of Turkish Prime Minister Recep Erdogan. Al-Jazeera reports Syria has confirmed downing the craft. A statement by the military said, “Our air defences confronted a target that penetrated our air space over our territorial waters pre-afternoon on Friday and shot it down. It turned out to be a Turkish military plane.”

It is unclear which variant of F-4E from Turkey’s inventory has been brought down, but given the nature of its likely mission – reconnaissance – it was probably an RF-4E.  However, the base the patrol flew from, Erhac, is home to the 7th Main Jet Base Group Command and F-4E 2020 Terminator and F-4E Phantom II variants. This does not however preclude forward basing of RF-4Es from their normal home at Eskisehir, far to the northwest, in order to cut down flying time to the Syrian border. As of 2010, Turkey had 161 F/RF-4Es. The RF-4Es were first delivered in 1978, but began a modernization project in 2009.

According to the BBC, PM Erdogan’s statement said a search for the two crew members of the plane was underway and involved Turkish and Syrian coast guard vessels. PM Erdogan told reporters “Regarding our pilots, we do not have any information, but at the moment four of our gunboats and some Syrian gunboats are carrying out a joint search there.”

The Turkish military said it lost radio contact with the F-4 at 1158 (0858 GMT) on Friday while it was flying over Hatay, about 90 minutes after it took off from Erhac airbase in the province of Malatya, to the north-west.

The private news channel, NTV, later cited unnamed military sources as saying that the plane had crashed off Hatay’s Mediterranean coast, in Syrian territorial waters, but that there had been no border violation.

Witnesses in the Syrian coastal city of Latakia meanwhile told BBC Arabic that Syrian air defences had shot down an unidentified aircraft near the town of Ras al-Basit.

A second Turkish plane may also have been damaged. A TV station in Lebanon reported Syrian security sources stating their forces shot down one plane and hit another in Syrian airspace. The truth of the latter claim will perhaps be hard to verify, as the station is controlled by Hezbollah, an ally of the Assad regime, but it is very likely the downed F-4E was flying its mission with another.

How Turkey responds remains to be seen. PM Erdogan’s statement, released after a 2-hour emergency meeting, said Turkey would respond decisively once all the circumstances were established. Turkey, a NATO member, might attempt to invoke Article 5 of the NATO treaty, commonly known as the collective self-defense article, but the terms of the treaty state such an attack must occur in Europe or North America, e.g. not above Syria, giving other NATO members a convenient out. In any case, based on initial public Turkish reaction to the incident, PM Erdogan’s government will likely not have to take such a drastic step. According to “InAnatalya,” a Daily Kos Turkish contributor, “Reaction has been quiet. It seems to be understood by the people in Turkey that the F4 was in Syrian airspace.”

There have also been conflicting reports over whether Syria had earlier apologized for the incident.