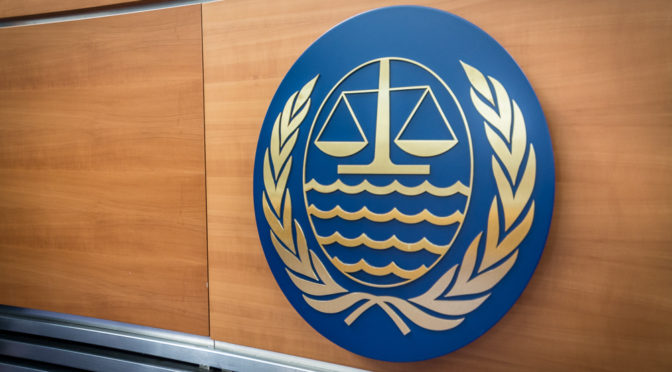 UNCLOS also establishes a related legal zone – the exclusive economic zone. The EEZ can only extend up to 200 nautical miles from shore. In the EEZ, the coastal state enjoys exclusive rights over resources found in the water column, particularly fish, and in the underlying seabed and subsoil. As with continental shelves, where states’ EEZ claims overlap, the delimitation should be guided by the principle of equity. The coastal state also has exclusive jurisdiction over artificial platforms, including those used for oil extraction, in its EEZ.

This language yields two ambiguities. First, in the section of the Convention dealing with the shelf, do shelf rights based on distance or natural prolongation take precedence when the distances involved are less than 200 nautical miles? Second, when the area to be delimited is less than 200 nautical miles from one or both states, can EEZ and continental shelf rights be separated, since EEZs also address access and rights to the shelf’s resources?

Historically, distance has taken precedence over natural prolongation and states and courts have simply delimited the continental shelf along with the EEZ, making moot the question of whether shelf and water column rights can be allocated to different states.

The ICJ issued the landmark ruling on shelf delimitation in the 1985 Malta v. Libya, in which it ruled that a delimitation based on equidistance was equitable. Libya and Malta’s coasts faced one another and were separated by less than 400 nautical miles. Libya maintained that the seafloor’s geomorphology entitled it to a portion of the continental shelf on Malta’s side of the equidistance line. The Malta Trench is a discontinuity in the continental shelf lying between Malta and the equidistant line. Since shelf rights stemmed from the principle of natural prolongation and the Malta Trench represented a break in natural prolongation for both the Maltese and Libyan coasts, Libya argued that the continental shelf boundary should run along the Trench. The ICJ, however, ruled against Libya and established a shelf boundary based on equidistance, not geomorphology. In doing so, the Court set a precedent that equity meant equidistance, not shelf delimitation based on morphology.

As states claimed EEZs, the delimitation of which has also been guided by an equidistance-as-equity principle, comprehensive EEZ-shelf borders have become the norm when within 200 n.m. of two states. A single delimitation for the EEZ and continental shelf is rooted in state practice, rather than treaty law. In a separate but related tradition, today’s court delimitations for the EEZ and continental shelf follow a three-step procedure. First, the court draws a provisional, comprehensive equidistance line between the relevant coasts. Second, the court checks for factors calling for a shift. And finally, the court checks for a disproportion between the lengths of each state’s relevant coastlines and the areas of relevant ocean allocated to each state. The result, historically, has been a single maritime boundary covering both the EEZ and continental shelf.

The Bay of Bengal’s Grey Area

The court struck a compromise between these two claims. If the court had applied the logic of a single boundary based on equidistance, Bangladesh’s rights would have terminated short of 200 nautical miles. But Bangladesh’s natural prolongation argument ran contrary to the established legal (if not geological) definition of natural prolongation. Instead, the court adjusted the comprehensive boundary line, both within and beyond 200 n.m. It replaced the equidistance line with a geodetic angle bisector that preserved Bangladesh’s access to the continental shelf beyond 200 n.m. In the map below, Bangladesh has rights to the left of the solid black line, while Myanmar has rights to the right of the line.

Court adjustments to equidistance lines are commonplace, but the result here – to connect Bangladesh to a continental shelf beyond 200 n.m. – was unprecedented.1 As a result, in one area the court’s adjusted line was over 200 n.m. from Bangladesh’s basepoints but within 200 n.m. of Myanmar’s. In this “grey area” Bangladesh could not claim an EEZ, but Myanmar’s claim was unopposed.

To preserve Bangladesh’s access to its “outer” continental shelf, the court thus ruled that Bangladesh would have shelf rights in the “grey area” while Myanmar would have all other EEZ rights. The grey area reappeared in the ICJ’s subsequent Bangladesh v. India (2014) ruling, for the same reason. (Collectively, Bangladesh v. Myanmar and Bangladesh v. India are referred to as the Bay of Bengal cases.) In both Bay of Bengal cases, the court refrained from providing a rigorously explicit justification for this unprecedented move. Observers were fairly critical of the decision, with noted international lawyer W. Michael Reisman characterizing the rulings as legislation from the bench that overturned longstanding precedent.

The grey area established in the Bay of Bengal cases can create governance headaches for two reasons, which would be present anywhere State A has shelf rights while State B has EEZ-based water column rights. First, while State A has the right to any oil in the subsoil, State B has jurisdiction over the permitting and operation of any artificial platforms State A or a concessionaire would construct to extract the oil. Second, State A would have a right to the “creatures of the shelf” who live on the seabed, while State B would have rights to all other living creatures in the water column. This could create harms for either party, if say, fishermen from State B employ trawling methods that capture, kill, or disrupt the creatures of the shelf to which State A has rights.

The Grey Area is Proper

Despite these growing pains and contra critics, the “grey area” is actually the correct if inconvenient interpretation of UNCLOS. The text of the convention in fact permits what the court did and ITLOS in particular is guided by treaty law. Instead of overturning the precedent cemented by state practice, the Bay of Bengal cases establish a new precedent for a different subset of cases.

Consider two important differences between past precedent and the Bay of Bengal cases that make them substantially different. First, state-negotiated delimitations are not strictly bound by the Convention. When states cannot agree on a delimitation treaty, however, and refer the dispute to ITLOS, the relevant treaty law becomes far more important. Second, Malta v. Libya and other precedent-setting cases (such as Romania v. Ukraine) involved only areas within 200 n.m. of both parties, whereas the Bay of Bengal’s grey areas involved a potential “outer continental shelf” entitlement. Together, these differences make the Bay of Bengal cases significantly different to Malta, and thus the courts’ decisions are not the repudiation of precedent they sometimes are portrayed as.

More importantly, the text provides a clear justification of the courts’ separation of the water column from the seabed, even if the courts themselves did not explicitly make any argument defending their unprecedented ruling. Article 56.3 UNCLOS provides that the EEZ rights regarding the seabed set out in Part V “shall be exercised in accordance with Part VI [Articles 76-85].” Following Article 56.3’s directive to reference Part VI leads to a clear and rational basis for the court’s decision in the Bay of Bengal cases. Article 77 clarifies that continental shelf rights exist automatically, and thus logically exist prior to EEZ rights, which must be claimed. Furthermore, Article 78.1 explicitly states that the rights of a coastal state over the continental shelf (N.B., not the “outer continental shelf” – the Convention contains no mention of the “outer continental shelf”) do not affect the legal status of superjacent water columns or air. This clause applies to the EEZ as much as it does to the high seas. Taken together, this reasoning indicates that, under a strict interpretation of UNCLOS, the court’s function in a delimitation involving both the EEZ and the continental shelf is to identify first pre-existing continental shelf rights (including those beyond 200 n.m.) and delimit based on equity and thereafter construct and delimit EEZ rights.

Where does this leave the courts and future delimitation? The ship has long since sailed on delimitations within 200 n.m. of both states in a dispute. Much as with flags of convenience, state practice and custom have overtaken the convention’s black-letter language when delimiting EEZ and continental shelf rights within 200 n.m. While the court can determine continental shelf rights within 200 n.m. without prejudicing its subsequent award of the water column, it is too much to expect that it will embrace this reasoning in all future cases. Nevertheless, the court should utilize the logic above to justify the grey area where appropriate to compensate geographically disadvantaged states and ensure access to shelf resources beyond 200 n.m. A cursory analysis of outstanding boundary disputes indicates that the Bay of Bengal precedent may be of use on the Pakistan-India and Nigeria-Togo-Benin border.

Finally, the grey area itself ought not to be feared. The challenges of overlapping shelf and water column rights is not an issue of rule of law versus governance, but rather one of rule of law versus rule of habit. Instead of complaining about inconvenience, the Bay of Bengal case is not only a triumph for written law on the international stage but also an opportunity for states to cooperate. Prodded along by their economic self-interest, as they were when drafting the Convention itself, states sharing a grey area should find innovative ways of managing resources at a time when multilateral management of the seas is more important than ever.

Cornell Overfield is an Associate Research Analyst at CNA Corporation, a nonprofit research and analysis organization located in Arlington, VA. The views and opinions in this article are his own and do not necessarily represent the position of CNA.

1. Outer continental shelf entitlements are usually caught in a circular trap, where the specialized body designed to verify their existence cannot verify if the entitlement is subject to dispute, but the courts will not resolve the dispute as long as the body has not verified the OCS’ existence.

Featured Image: Emblem of the International Tribunal of the Law of the Sea (ITLOS) at its headquarters in Hamburg, Germany. (Tom Vierus/Livingdreams.tv)

0 thoughts on “Reflecting the Law of the Sea: In Defense of the Bay of Bengal’s Grey Area”