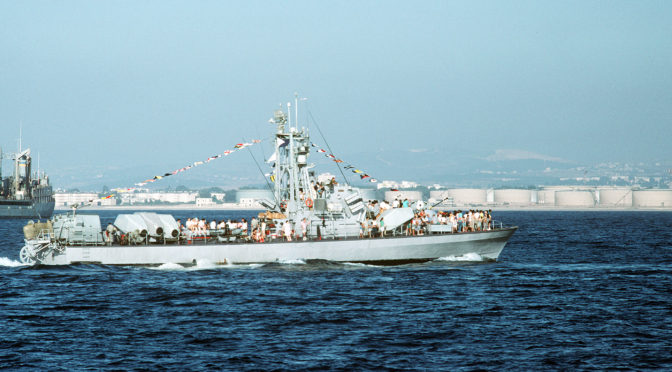 The Yom Kippur War (1973) was a war of great victory for the Israeli Navy, in contrast to the Israeli Air Force and Army. The Navy’s success in the Yom Kippur War was the fruit of lessons learned by the Navy during the Six-Day War (1967), in which the Navy failed in most of its missions, even though they were insignificant in the grand campaign conducted by the Israeli Defense Forces (IDF).

After the Six-Day War, the Navy suffered a wide budget cut, with most of the IDF’s budget directed to strengthening the Air Force and the ground forces, which had proved their importance and capabilities in the war against the Arab armies. Moreover, during these years, the Navy experienced two disastrous events: the sinking of the INS Eilat by a barrage of anti-ship missiles from Egyptian missile boats (October 1967); and the loss of the submarine INS Dakar (January 1968).

In the process of drawing lessons from the Six-Day War and the other two events, the Navy realized that it must act with its relatively limited resources to build its power and develop a response to the naval threats of Syria and Egypt. The two countries’ navies began a buildup process that intensified in the 1960s by acquiring Soviet Osa-class missile boats, equipped with advanced Styx anti-ship missiles, a fairly novel capability at the time.

Following the war, Israel’s navy changed its combat doctrine and started operating with small and fast missile boats (which replaced larger surface combatants equipped with cannons). From the INS Eilat sinking’s lessons and insights, the Navy realized that it had to equip the new ships with advanced radars for long-range target detection and surface-to-surface missiles against the potential threat of dozens of Egyptian and Syrian Osa missile boats.

The Gabriel anti-ship missiles developed indigenously by the Israeli defense industry in the late 1960s were short-range missiles (about 11 nm). This range was significantly shorter than the Russian Styx missiles’ range (about 24 nm). The difference in the ranges of the two missiles created a significant operational problem for the Israeli Navy. The Israeli missile boats had to operate within the weapons engagement zone of the Russian Styx missiles’ to fight against the Osa missile boats.

To cope with the operational problem and enable the effective firing of the Gabriel missiles against the Osas, the Israeli Navy developed electronic warfare systems. The systems were meant to transmit electromagnetic signals based on understanding how the attacking missile’s homing seeker operates (active electronic warfare), along with the launch of decoy rockets scattering clouds of metal particles (chaff). The jamming signals, together with the chaff, made it possible to mislead the attacking missile’s seeker, thus diverting it from its flight trajectory and preventing it from hitting its target.

When designing the electronic warfare systems to protect the vessels, the Navy assumed that the Soviet Styx missiles were designed for use against large ships and would not be able to hit small targets such as the Sa’ar-class missile boats. But an incident in 1970 completely changed the Navy’s mindset.

In May 1970, a fishing boat named Orit was sunk off the Egyptian coast by Styx missiles fired by the Egyptian Navy. The sinking of the fishing boat proved that the Styx missiles were also effective against small ships, forcing the Navy to change its electronic warfare systems’ design, capabilities, and doctrine. The sinking of the Orit and the deaths of two fishermen arguably saved the lives of hundreds of missile boat sailors three years later in the Yom Kippur War.

These were the days of the war of attrition. Gamal Abdel Nasser, the Egyptian president, was unwilling to accept the results of the Six-Day War, and in a speech delivered on May 1, 1970, he threatened to attack Israel by air, land, and sea. In his speech, Nasser emphasized that the Egyptian Navy would sink any Israeli ship found in Egyptian maritime territory without warning.

During the period between the two wars, many Israeli vessels sailed in the Bardawil Lake area (in the vicinity of Port Said, Egypt). Most of them were fishing boats, trying to make a living from the fisheries in the area. In order for the Navy to guarantee their safety, the fishing boats were required to report their location to the Navy four times a day (08:00, 13:30, 16:30, and 00:30).

The Orit was a relatively small fishing boat (about 20 meters long and with a tonnage of about 75 tons) that regularly operated from the port of Ashdod. The fishing boat had a four-person crew led by Captain Adam Yassar.

On Wednesday, May 13, 1970, about two weeks after Nasser’s speech, the fishing boat crew decided to sail towards Bardawil Lake, where there was a large quantity of fish and where nighttime fishing was relatively easy. That evening, about twenty miles from Bardawil Lake, the Orit sent its last location report on its way north.

At about 22:30, between three and four Styx missiles were fired by the Egyptian Osas toward two Israeli Sa’ar-class missile boats that were in the Bardawil Lake area. The Israeli missile boats used their electronic warfare systems and were not hit by the Egyptian missiles, which were heard exploding in the distance. But shortly after the Styx missiles’ blasts were heard, the Orit mark disappeared from the radar screens of the Israeli missile boats. The attempts to call Orit went unanswered.

The next morning, May 14, no further report had been received from Orit and the loss of communication caused a great deal of concern. Extensive searches for the Orit began at sea using other fishing boats and Navy missile boats. That day, remnants of the fishing boat were discovered floating on the water. The remains of the boat were removed from the water and brought to Israel. Most of the boat’s hull remained on the seabed.

Two of the Orit’s crew survived the missiles and managed to float on the water. They swam for over a day toward the Sinai coast where their lives were saved. But two of its crew members, Segal Ackerman and Captain Adam Yassar, did not survive.

Ackerman’s body was found floating on the water, and Adam Yaasar was trapped in the wheelhouse and drowned with the boat’s remains. Adam Yassar’s body was found only after about eight days by a commando unit team, who dived to search for him in the wreck of the boat left on the seabed.

One of the survivors, Oded Kopelnik, reported what happened and said that two Styx missiles exploded over the fishing boat and caused it to disintegrate and sink.

Following the incident, the Israeli Navy and its commander, Admiral Avraham Botzer, were severely criticized by the press, with concerns about the Navy’s ability to secure Israeli fishing boats and merchant ships in the Red Sea and the Mediterranean. The allegations were that the Navy did not build the maritime picture as required, did not maintain continuous contact with the Israeli fishing boats operating in the arena, and did not provide them with spatial protection from the threat of warships and Egyptian missile batteries.

The allegations were that the Navy had not drawn lessons from incidents in the years before the Orit’s destruction. The Orit’s sinking came two years after INS Eilat, the Navy destroyer, sank in the exact same area by the same model missiles fired by Egyptian missile boats. What is more, in February and April 1970, several months before Orit sank, the Navy was unable to prevent an Egyptian commando force’s daring operation to mine a vessel in the port of Eilat.

The Orit  incident was another layer in the allegations made against the Navy about its inability to fulfill its obligations to maintain the Israeli maritime border and the merchant ships’ security at that time. There were calls for establishing a state commission of inquiry to investigate the Navy’s sequence of failures, including the Orit incident, although an inquiry commission was never formed.

In 2020, an interview with a retired Egyptian Navy admiral revealed more information about the incident. The admiral, who was the area commander at that time, noted that the fishing boat was observed in the radars of the Egyptian missile boats, and the decision to fire the missiles immediately was taken with the assumption that the fishing boat was an Israeli intelligence ship.

During the Israeli investigation of the incident, one of the hypotheses was that the electronic warfare system of the Israeli missile boat may have diverted the Styx missiles that sank Orit. This hypothesis was eventually rejected and the confession of the admiral confirmed that the fishing boat was the intended target.

The seekers’ locking on Orit as a legitimate target led the missiles to navigate toward it and to detonate their warheads near the Orit (with the warheads weighing five hundred kilograms each).

The analysis of the Israeli electronic warfare systems’ recorded signals, together with the radar detection of the Styx missiles during their flight, later led the research and development teams of the Israeli Navy and the defense industry to understand that the Styx missile seekers captured Orit as a legitimate target, despite its small size and low radar cross-section (RCS). These insights led to a change in overall perceptions of anti-ship missile defense and enabled updating the electronic warfare systems in the Israeli Navy.

These changes, made before the Yom Kippur War and after the Orit sinking incident, enabled the Navy in 1973 to operate within the range of the Egyptian and Syrian warships’ Styx missiles. More than 50 missiles were fired without effect at Israeli Navy ships during the war. The Israeli Navy launched its Gabriel missiles, sank 44 Egyptian and Syrian ships, and returned back home safely without any casualties and losses.

The naval superiority achieved in the Yom Kippur War allowed Israel to control the sea trade and commerce routes and to secure the supply of weapons and ammunition shipped from the United States to Israel. These sea shipments created a logistical backbone to Israel and allowed the IDF to continue fighting in its various frontiers until military superiority was achieved.

The deaths of Segal Ackerman and Captain Adam Yassar, whose exact place of death was never determined, changed the face of the naval battles in the Yom Kippur War and in the next decades.

In their deaths, they commanded us life. May their memory be blessed.

Eyal Pinko served in the Israeli Navy for 23 years in operational, technological, and intelligence duties. He served for almost five more years as the head of the division at the prime minister’s office. He holds Israel’s Security Award, Prime Minister’s Decoration of Excellence, DDR&D Decoration of Excellence, and IDF Commander in Chief Decoration of Excellence. Eyal was a senior consultant at the Israeli National Cyber Directorate. He holds a bachelor’s degree with honor in Electronics Engineering and master’s degrees with honor in International Relationships, Management, and Organizational Development. Eyal holds a Ph.D. degree from Bar-Ilan University (Defense and Security Studies).