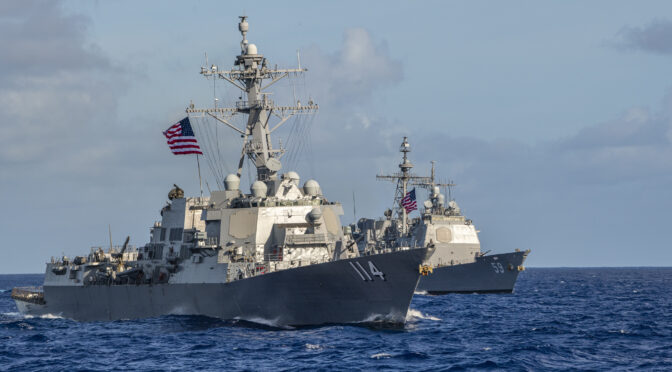 As we look at our readiness to fight and win at sea, it is clear that our organizational structure is not optimized for the challenges ahead. For the past 30 years, the Surface Force’s administrative and operational chains of command centered on the Destroyer Squadron (DESRON) and the Amphibious Squadron (PHIBRON). These core organizations stand at the crux between the Surface Type Commander (TYCOM) and the Carrier Strike Group Commander or, alternatively, the numbered fleet commander. They are charged with ensuring the material readiness of their ships as well as their operational employment in times of conflict. This model has supported our force in the decades since the collapse of the Soviet Union. However, as we confront the return of strategic competition, a renewed focus on maritime power demands evolving the way we prepare our force to fight and win.

We—like much of the military—made trades after the fall of the Berlin Wall, trades that eliminated redundancy and capacity that contributed to combat effectiveness, trades made in the pursuit of greater efficiency. Those trades were reasonable and rational in an era without great power rivals. But we have returned to a time where the scale of efficiency and effectiveness must lean toward the latter.

The Surface Force must be prepared to execute dominant sea control and power projection missions against a peer adversary. Regarding this end, we must reimagine the DESRON/PHIBRON model to achieve greater warfighting readiness. The pursuit of greater efficiency in DESRON and PHIBRON staffs, logical in the post-Cold War environment, is no longer sufficient to support the organizational and operational necessities of today’s strategic landscape, particularly from a manning and training perspective. As a prudent response, we are identifying requirements and resources for a return to the proven approach of having an organization devoted solely to readiness and focusing squadrons on operations and tactics. In this approach, we believe there is an apt comparison to be made between our Navy today and that of the late 1960s – outnumbered by our adversary but never outclassed. We cannot relinquish that fundamental advantage of warfighting readiness.

With the support of Commander, U.S. Fleet Forces Command, and the Commander of the Pacific Fleet, we move forward with a plan to establish readiness commands (Surface Groups or SURFGRU) in all fleet concentration areas that will be manned, trained, and equipped to manage Surface Force (SURFOR) ships through the maintenance and basic phases of the Optimized Fleet Response Plan (OFRP), while maintaining oversight of readiness functions during the follow-on phases, to include deployments. These commands will be better positioned to support our ships, TYCOMs, and numbered fleet commanders as we make our Surface Force ready.

Operational squadrons, DESRONs, and PHIBRONs will still provide oversight of ships within their purview. But now with the focused support of the SURFGRUs during the maintenance and basic phases, precious time will be freed up for operational squadrons to concentrate on their warfighting role. During deployment and sustainment phases, DESRONs and PHIBRONs will execute the employment, tactical development, and advanced training of ships at the direction of the numbered fleet commanders and their strike groups. This dichotomy enables a greater focus on warfighting and readiness generation by clearly delineating these functions within the operational and administrative chains of command.

A similar model already exists today to support Forward Deployed Naval Force – Japan (FDNF-J) forces. The Commander, Naval Surface Group Western Pacific (CNSGWP) serves as the readiness SURFGRU commander, and COMDESRON 15 and PHIBRON 11 serve as the operational squadrons for all forward-deployed surface combatants and amphibious ships. This model was established in 2018 and has proven itself as an enduring structure to support surface ships across the OFRP. CNSGWP, with an acute focus on readiness, has reversed low maintenance completion percentages, worked to preserve basic phase training entitlement for ships, and served as a tireless advocate on the waterfront while freeing up operational commanders to focus on warfighting duties.

For those “of a certain vintage,” this plan reflects conditions once seen on the waterfront in the late Cold War era. From 1978 to 1992, Norfolk maintained two non-deploying “Readiness Destroyer Squadrons,” CDS 2 and CDS 10, each of which was led by a Sequential Commander (post-major command captain). These officers each exercised administrative control of between 15-20 frigates, destroyers, and for a time, cruisers during the non-deployed portions of those ships’ schedules. In San Diego, the Readiness Support Group (RSG) fulfilled the same roles. At the end of the basic phase, units would shift to the tactically-focused DESRONS for intermediate, advanced, and deployment operations. How those ships were employed was the focus of the DESRON, which was tied to an aircraft carrier battle group working up for or engaged in forward operations. While the DESRON had modest staffing for readiness functions (such as engineering and supply), most of those functions were retained by the Readiness Squadrons or RSGs. These DESRONS reported to numbered fleet commanders, and Readiness Squadrons reported to Type Commanders.

DESRON 2 and DESRON 10, like the amphibious-equivalent PHIBRON 10, were always in the ship’s chain of command, never relinquishing responsibility for readiness. One staff focused on readiness for warfighting, the other focused on the art and execution of warfighting. It is in this direction the Surface Force must once again proceed.

Make no mistake—these organizational changes in no way dilute existing command relationships with respect to Operational Control (OPCON) of forces. Rather, we move in this direction to ensure the proper resources and attention are directed at the critical combat requirements of unit-level readiness and operational excellence. Every day and every dollar spent on training and maintenance must be ruthlessly prioritized and allocated to deliver warfighting outcomes. Informed prioritization and allocation by organizations wholly devoted to waterfront readiness is a better construct to deliver on our ultimate goal of more capable ships.

This organizational change is designed to meet the demands of Distributed Maritime Operations (DMO) with an emphasis on Surface Force effectiveness. The warfighting architecture of DMO requires highly capable and networked ships in numbers to present an adversary with multiple operational dilemmas and provide the Joint Force Maritime Component Commander (JFMCC) with multiple methods to eliminate key targets. Put another way, DMO depends on more ready ships, and that is what we are all about.

We are determined to meet the challenges of strategic competition through embracing data analytics, appreciation of past lessons, and adoption of organizational changes to drive greater effectiveness in our force readiness generation. The conviction entrenched in our Competitive Edge strategy is not an end, but a means. As the CNO recently noted in his 2022 Navigation Plan, “…The Navy which adapts, learns, and improves the fastest gains an enduring warfighting advantage.” The Surface Force is pursuing changes to our readiness structure to maintain and enhance this warfighting advantage. We must and will be prepared to fight and win at sea.

7 thoughts on “Organizing to Fight and Win at Sea: The Surface Force Imperative”