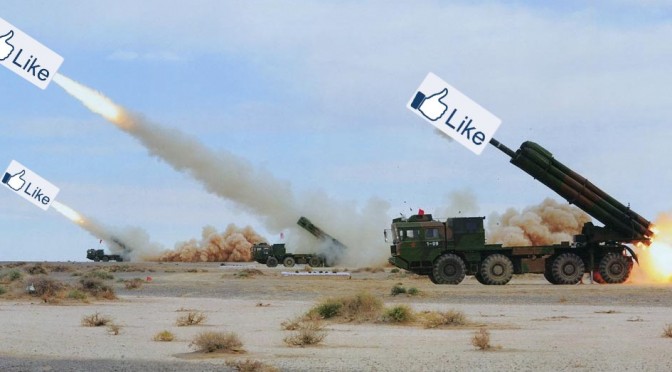 This article was written for our Strategic Communications Week.

It’s been clear for years now that Twitter, and social media writ large, have become battlespaces, where success is measured one retweet at a time. In 2012, ISAF and the Taliban went after each other in a tit-for-tat that sparked headlines like “NATO, Taliban take war to Twitter.”

Or take the example of the current conflict in Iraq, and ISIS’s (or ISIL’s) sophisticated recruiting campaign that The Guardian dubbed “Jihadi Cool.”

“Nothing ignites the spirit of brotherhood more than Jihad.” Nasser Balochi pic.twitter.com/bxbOF8QCIb

While it’s difficult to pinpoint the number of fighters ISIS has recruited via social media, the mass reach of its message is undeniable. The gruesome executions of James Foley and Steven Sotloff first appeared on social media sites, including Twitter and YouTube, and became headline news in a matter of hours.

The U.S. has put its weight behind a social media offensive of its own, and it’s important to note that both sides are taking the social media front seriously. ISIS employs advanced tools, like an app called “Dawn” that autotweets pro-ISIS messages from users that download it, and effective techniques, like hashtagging key phrases, to centralize the group’s message. Both aspects are weapons in the war for influence, and the most influential organizations should be taking notes.

Military action and information operations have gone hand in hand since the dawn of warfare. Given the ubiquity of social media, taking IO to the social battlespace seems logical and necessary, but several issues make that leap a tricky act.

First is the “P word” – Propaganda, which gets thrown around every time the military forays into the world of mass messaging. Take the example of DARPA’s study of social networks. Since its start in 2011, the dryly named Social Media in Strategic Communications (SMISC) program has been scrutinized by the media as the groundwork for a social media propaganda machine. Even under the most noble pretenses- protecting troops in the field by studying social media cues, the negative connotations of government snooping on social networks, especially in a post-Snowden era, are good enough reasons for some organizations to limit their involvement with social media.

After Facebook’s psychological experiments on users surfaced in July 2014, The Guardian was quick to draw connections between Facebook’s widely disparaged study and DARPA’s SMISC. The smart defense media planner should take these comparisons into context, or otherwise risk losing valuable messaging opportunities.

A second challenge to military social media strategy is one that not all militaries face. If you’re part of the Israeli Defense Force, you have no problems tweeting the following:

Since starting our ground operation in Gaza, we have struck 1,388 terror sites and killed 183 terrorists. pic.twitter.com/g7FtwHq1Tc

Now if you’re tweeting on behalf of the U.S. military, you just can’t do this. Whereas the IDF has defined itself as a do-anything-to-win organization, the U.S. military places a great deal of effort into avoiding the perception as a killing force. Any media strategy must draw from the organization’s values, and for the U.S. military that means centering its tweets around the values of professionalism, leadership, and technical know-how.

So amidst the perils of doing social media wrong, who’s doing it right? The first lesson comes from none other than the IDF, which crafts media products that are built for sharing. Their graphics and videos are visually engaging, easily understood, and as a result, perfect for passing on to Twitter followers, Facebook friends, and Youtube subscribers.

In less than two months, Hamas has fired more than 4,000 rockets at Israeli civilians. Share this. pic.twitter.com/fBkqnVyVrs

The idea that social media products should be shareable isn’t exactly a revelation in strategic communications, but too often, organizations fail to execute on the concept. Take PACOM’s Twitter feed (@PACOM), for example, which is so littered with acronyms and military jargon that it takes a professional military education to understand it. More jargon means a disengaged audience, which in turn means fewer shares and limited distribution.

Promoters, Millions of Them

The second lesson comes from ISIS, which relies on a network of outsiders to promote its material. Instead of a single source as the monolithic voice of the organization, multiple authors carry the water for ISIS. This distributed model lends the appearance of authenticity. It also creates a huge problem for the people attempting to control the spread of ISIS’s messages. Blocking offending users as they pop up becomes a challenge, and squashing violent statements on Twitter brings up meaty questions regarding free speech that are yet to be answered.

While militaries are built on authorities, and their communications strategies on official statements and messaging, the truth of the matter is that in social media, the official line is only the beginning of a discussion. Military topics draw crowds of commentators, and more than ever, official posts should be considered no more  than starting references for all of the conversations to follow.

The Serious Business of Social

A February 2014 Reuters study found that 57% of Facebook users and 50% of Twitter users had discovered, shared, or discussed a news story on the sites in the previous week. Internationally, the number of users who get their news (and arguably, their opinions) from social media will continue to increase, as will the opportunities for the most responsive organizations to communicate their messages in that domain.

Gaining the upper hand in social media requires interest and resources, but the alternative is being left out of the discussion. In strategic terms, that’s handing the initiative to your enemy.