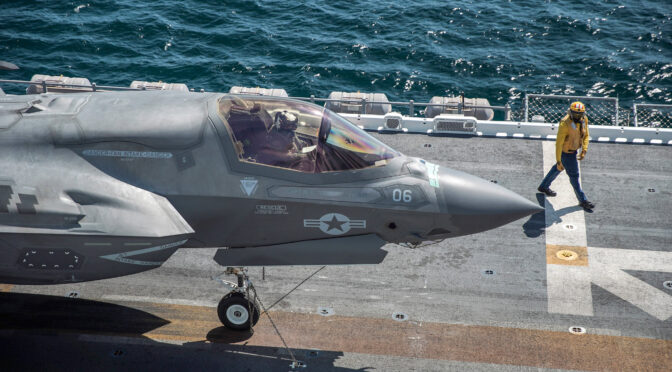 When attempting to answer the question of what the U.S. military should be ready for, the responses are usually positive ones, statements of actions it should be prepared to undertake. But another possible answer is a negative one, a statement of what the U.S. should reject doing, and should choose to not be ready for. When the U.S. makes an effort to be ready for one eventuality, it is reducing its readiness to respond to others. Policymakers should consider both sides of this coin, and more consciously accept risk.

A new policy to not deploy forces to a particular location need not be formally proclaimed or written down. Nevertheless, if observers around the world could infer from American action and inaction that the U.S. has determined that a region is a lower priority for its forces, they would pick up the message that even the U.S. military is unwilling to burden itself with presence in particular corners of the world, at least not in an era of great power competition. In the maritime realm, both the Navy and the Marine Corps can benefit from excluding certain regions from sustained deployments; it would allow them to more effectively concentrate on great powers.

The Navy could cease deploying ships to the Persian Gulf, or at least reduce deployments far below the significant levels it has maintained for the past two decades. While ensuring the stability of oil supplies is not the only rationale for the U.S. Navy’s presence there – deterring Iran is another major reason, as are concerns about terrorism – the U.S. nevertheless spends $5 billion per year securing Gulf oil, according to a 2019 estimate by the Watson Institute at Brown University.1 This is part of the estimated $81 billion it spends on protecting global oil supplies.2 A reduction in this expense is worth pursuing at a time when defense spending is likely to fall, and when naval readiness has suffered major maintenance issues as a consequence of attempting to meet this CENTCOM demand signal.

An objection that might be raised to this policy is that, even if the stability of oil supplies and prices is not the primary reason for a U.S. presence in the Gulf, the removal of U.S. warships would nonetheless have a destabilizing effect. If Iran felt emboldened to attack the Arab monarchies of the Gulf, the likelihood of a full-fledged regional conflict would increase, and one consequence of which would be a rise in oil prices. However, while for a time it was a standing requirement for the U.S. to have at least one carrier in the Gulf at any given time, gaps in carrier presence have become more frequent in recent years, and Iran did not launch any attacks during month-long gaps in 2015 and 2017.3 Fears of Iranian aggression might well be misplaced.4

Meanwhile, an oil price increase resulting from greater instability (assuming it does not stem from acute conflicts or violence) is not necessarily something for the U.S. to actively avoid. On the contrary, it is something the U.S. can use to its advantage, a spur to reduce its reliance on oil more generally, regardless of where it comes from. The Biden administration’s desire to greatly increase American use of non-fossil energy provides the military with an opportunity to engage with the energy side of readiness.5 If an embrace of high oil prices resulting from withdrawal from the Gulf were combined with an energy policy that included greater investment in clean technology – building on DOD’s longstanding investments in alternatives to fossil fuels – readiness would receive a boost.6,7,8As Peter W. Singer and Jerry Warner put it in a 2009 primer for the Brookings Institution:

“The path to continued readiness requires reducing the overall amount of energy that the Department of Defense (DoD) uses and increasingly turning to alternative energy sources to meet fuel needs.”9

There is also the human cost of dependence on oil. In 2009, the Army Environmental Policy Institute analyzed casualties in fuel and water convoys in Afghanistan and Iraq from 2003 to 2007. They found that one in every 24 convoys in Afghanistan in that period, and one in every 38 in Iraq, resulted in at least one casualty.10 As Iraq war veteran Adam Tiffen wrote in War on the Rocks in 2014, “going green on the battlefield saves lives.”11 Going green can also help keep U.S. Navy warships out of the Gulf and in the Indo-Pacific.

There are further potential benefits to readiness for scaling down regional commitments. It would leave more ships available to deploy to other regions, including the Indo-Pacific. In recent years, China has increased its naval presence in the Middle East, and a reduction in U.S. vessels in the region could be an invitation for Beijing to increase it further, and thereby dilute its presence in the Western Pacific.12 While it is not guaranteed that China would move into the Gulf if the U.S. moved out, it is significant that China imports approximately 35 percent more oil from Saudi Arabia than the U.S. does.13 Most likely, any increase in oil prices resulting from instability would have a stronger effect on China than the United States. Any action that can tie China’s hands vis-à-vis energy security short of direct confrontation is something for the U.S. to consider.

The Gulf’s proximity to India can also make the People’s Liberation Army Navy’s challenges more difficult should it devote more resources to the region. China’s rival in South Asia would surely be worried about an increased Chinese naval presence in the Persian Gulf and the Arabian Sea. It would amplify India’s longstanding worries about the long-term partnership between its two continental rivals, China and Pakistan.14 Resulting pushback from India could make it more difficult for China to secure its oil supplies, further distracting it from the Pacific, and forcing it to devote more attention toward guarding against a rival navy.

A decision to make parts of the world off limits for sustained U.S. presence could benefit the Marine Corps especially. The deployment of Marines in Afghanistan and Iraq in the past two decades has drawn the Corps away from what ought to be its primary focus, maritime operations. Continuing to send members of what is ostensibly a maritime service into land-based theaters is not an effective way to prepare them for great power competition in the Pacific.15

The United States could decide that, unless extreme circumstances transpire, it would not deploy Marines to Central Asia. If it saw the need to send troops there, it could prioritize sending Army units, and if those were insufficient to accomplish the mission, the U.S. could consider alternatives. It might help local forces stand up, incentivize allies to send in their troops, or simply turn away and consciously accept risk. While not as expedient as simply sending in more troops, these alternatives work to preserve readiness on a strategic level.

In any case, America would most likely not exhaust its Marines in that particular part of the world in the foreseeable feature. Even if another major terrorist attack was launched on the American homeland from Afghanistan, the U.S. would likely limit its response to air and missile strikes, a modest number of boots temporarily on the ground, and support for local partners, and little else. If combatant commanders requested a substantial presence of troops deep in the interior of Asia to help complete the mission, the President, Secretary of Defense, and Chairman of the Joint Chiefs would likely say no, and rightfully so. The war weariness of the American public and the associated political constraints it places on operational endeavors could be harnessed to reap readiness gains. This would be somewhat similar to the military’s recovery in the post-Vietnam era, which was greatly facilitated by the Reagan administration making the restoration of readiness a deliberate policy priority.

Does the U.S. need to be ready to intervene in every region of the world? Does the military’s reach and presence need to be truly global? Or would it make sense to say of certain parts of the world, “we can’t afford to be here”? A policy of saying “no” by default to some demand signals is a perfectly sensible choice, especially in a resource-constrained environment marked by great power competition. In the case of Central Asia especially, the U.S. has the option, if it chooses, of effectively sending the message to the major actors within the region – China, India, Pakistan, and Russia – “this is your burden to shoulder, not ours.” U.S. military readiness would benefit from such a message.

In an era when the military is going to spend years attempting to dig out of the readiness hole driven by decades of high operational tempo, it makes sense to intentionally rule out certain scenarios and regions in order to ensure readiness for others. With the Indo-Pacific being the Navy and Marine Corps’ primary focus for the foreseeable future, a conscious if undeclared policy of keeping assets out of the Gulf and Marines out of Central Asia can improve the sea services’ readiness to confront China. If the U.S. is to remain the preeminent world power, it might have to give up the ability to be global in its military reach.

Michael D. Purzycki is an analyst, writer, and editor based in Arlington, Virginia. He has worked as a communications and media analyst for the United States Marine Corps and a technical writer for the Department of the Navy. He has been published in Charged Affairs (the journal of Young Professionals in Foreign Policy), Divergent Options, Merion West, Braver Angels, the Washington Monthly, France 24, the Truman National Security Project, and Arc Digital. He was awarded First Place in Divergent Options’ 2020 writing contest, “Below Threshold Competition: China,” for his essay, “Options for Altering Global Energy Developments to America’s Advantage and China’s Disadvantage.” He can be found on Twitter at @MDPurzycki and on Medium at https://mdpurzycki.medium.com/. The views expressed here are his own.

3. Larter, David B. “What if the US stopped sending aircraft carriers to the Arabian Gulf?” Defense News, May 2, 2018. https://www.defensenews.com/naval/2018/05/02/what-if-the-us-stopped-sending-aircraft-carriers-to-the-arabian-gulf/

6. Energy.gov. “Departments of the Navy, Energy and Agriculture Invest in Construction of Three Biorefineries to Produce Drop-In Biofuel for Military.” September 19, 2014. https://www.energy.gov/articles/departments-navy-energy-and-agriculture-invest-construction-three-biorefineries-produce

15. Associated Press. “For Marines, it’s back to the future after Iraq, Afghanistan.” Washington Post, December 4, 2011. https://www.washingtonpost.com/politics/for-marines-its-back-to-the-future-after-iraq-afghanistan/2011/12/04/gIQAADA6TO_story.html