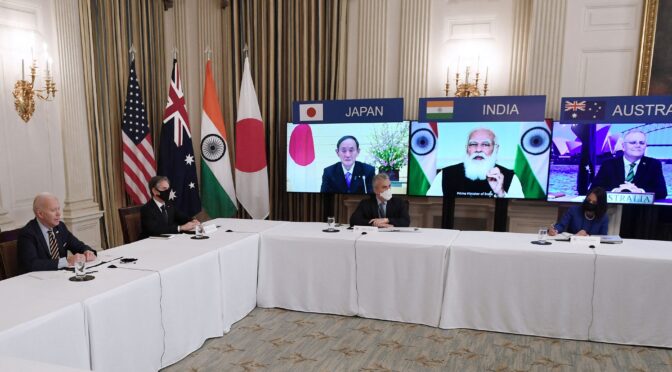 On August 26th, ships, aircraft, and personnel from Australia, India, Japan, and the United States commenced, for the second year in a row, a combined naval exercise to demonstrate “cooperative planning, training, and employment of advanced warfare tactics.”1 The exercise, Malabar 2021, marks a significant step toward increased maritime cooperation between the four members of the Quadrilateral Security Dialogue, or Quad, which has emerged as a promising but unproven partnership for regional security in the Indo-Pacific. The Quad nations are united by their agreement on the importance of a free and open Indo-Pacific but have not yet defined their mutual role in the region. Lingering ambiguity surrounding the Quad’s intended function breeds doubt about its potential for success and prompts dismissal by critics of the current, informal relationship.2

Former Japanese Prime Minister Shinzo Abe first described a vision for the Quad as a “security diamond” meant “to safeguard the maritime commons” of the Indo-Pacific.3 How might the current leaders of the Quad nations defy the critics and bring Abe’s vision to fruition? Maritime security is an innately multinational interest with challenges such as unregulated fishing, smuggling, and piracy that occur in international waters and traverse borders between states.4 The Quad, comprised of four democratic nations committed to the rule of law, is well-suited to muster a collective response to these illicit activities. The United States, for its part, would be wise to embrace such cooperation. U.S. policymakers concede that America’s military advantage in the region is eroding and that allies and partners are crucial to achieving U.S. policy objectives.5 The combined national powers of the Quad provide an opportunity to exert the military and law enforcement presence necessary to respond to security threats while actively pursuing increased cooperation with rising regional powers. The Quadrilateral Security Dialogue should focus the combined diplomatic, information, military, and economic power of its member nations to promote maritime security in the Indo-Pacific by fostering and strengthening rising partners in the region while coordinating to detect, analyze, and interdict illicit maritime activity.

The Quad’s main line of effort in the tense Indo-Pacific region should be diplomacy, and the primary avenues of approach should be relations with the Association of Southeast Asian Nations (ASEAN). The Quad provides a vehicle for its members to engage ASEAN on common goals as one body, rather than as separate parties. ASEAN’s own published “Outlook on the Indo-Pacific” echoes many of the Quad’s priorities for the region, indicating that engagement would likely be worthwhile. The ASEAN nations aspire to play a central role in promoting maritime security by combating transnational crimes such as “trafficking in persons or of illicit drugs, sea piracy, and armed robbery against ships” and by cooperating for “sustainable management of marine resources.”6 The Quad, in turn, has publicly committed to ASEAN centrality in the region and voiced support for ASEAN’s “Outlook.” Such agreement between the two multinational partnerships is a starting point for increased diplomatic efforts and consensus-building.

Another diplomatic component of maritime security in which the Quad nations are highly capable is the realm of humanitarian aid and disaster relief (HADR). The Quad could expand its soft power in the region with little political resistance by incorporating HADR into its diplomatic agenda.7 By continually promoting itself as a force for good in the region, the Quad will retain the necessary diplomatic capital to enforce maritime law and stave off allegations that its purpose is as a military alliance for great power competition. As China’s presence and power in the region continue to grow it will be increasingly important for the Quad to remain an attractive, non-threatening partner for ASEAN cooperation. HADR will likely prove a key component in sustaining goodwill among both ASEAN political leaders and the people of Southeast Asia.

After establishing firm diplomatic ties with ASEAN nations and other cooperative partners, the Quad should coordinate economic investments to help those partners strengthen their own maritime security efforts. Several Quad nations already have existing economic programs meant to address such security challenges. The Maritime Security Initiative of the United States, for example, is a $425 million program that provides grants to ASEAN nations for technologies such as automatic identification systems; intelligence, surveillance, and reconnaissance capabilities; data collection capacity; and secure communications.8 The promise of the Quad is the ability to direct the economic efforts of all four nations toward a single purpose to maximize effectiveness. By acting as one body the Quad can dedicate more resources towards providing ASEAN nations with the technologies and capabilities required to make them effective maritime security partners.

In addition to assisting ASEAN nations with their maritime security capabilities, the Quad could improve economic security in the region by responding to violations of ASEAN economic exclusion zones (EEZs). For example, as signatories to the UN Fish Stocks Agreement, the Quad nations would share an interest in conducting boarding and inspection of fishing vessels to ensure compliance with international rules.9  Enforcing the rule of law in EEZs would help ensure that ASEAN nations have the right to protect and benefit from their own natural resources. Improving their economic situation would provide ASEAN nations with more financial resources to dedicate towards maritime security initiatives.

While diplomatic and economic efforts should largely be spent fostering new partnerships for the Quad, the information and military levers of power should be directed toward improving the Quad’s ability to respond to current issues in the region. One of the major challenges to fostering maritime security in the vast Indo-Pacific is maintaining continuous maritime domain awareness (MDA). The individual Quad nations already possess many of the resources and doctrine required to contribute to a robust MDA picture. In the area of maritime patrol and reconnaissance aircraft, for example, all four nations field comparable assets. The United States, Australia, and India all operate the P-8 Poseidon, and while Japan chose to build the Kawasaki P-1, it shares many standard operating procedures and tactics with the United States and Australia from many years of operating the P-3 Orion.10 The Quad’s immediate focus in the information realm should be combining the MDA efforts of its assets into a shared Common Operational Picture (COP) that provides all four nations with situational awareness of maritime security concerns.

The primary hurdles for the development of a shared COP are limits on information sharing. The Quad should build upon recently signed agreements such as the Communications Compatibility and Security Agreement (COMCASA) between the U.S. and India and the Trilateral Information Sharing Arrangement (TISA) between the U.S., Australia, and Japan to craft a quadrilateral agreement that allows for universal sharing of maritime intelligence.11,12  With information sharing architecture in place, the Quad should next form a maritime intelligence fusion center where analysts from all four nations can assimilate information and coordinate military or law enforcement responses to illicit maritime activity. Ideally, this fusion center would be developed in a central, strategic location such as India’s Andaman and Nicobar Command at the mouth of the Strait of Malacca.13

In addition to instituting formal information sharing and analysis, the Quad should take several steps to improve its military response to maritime security issues. First should be organizing and conducting ongoing training for proficiency and interoperability, both among its own nations and alongside willing participants from ASEAN. Most of the training should focus on law enforcement and response, which would be less politically sensitive than regular drilling of warfighting tactics and would address the most common concerns in the region, such as smuggling, piracy, human trafficking, and illegal fishing.14 The Quad could even consider involving Chinese authorities in law enforcement training as a way to foster cooperation on mutual concerns.

After a period of successful training, the next step for the Quad should be to create an on-call force comprised of Quad naval and coast guard assets that would share responsibility for responding to illicit activity across the region.15 The four nations would coordinate the placement of maritime assets across the region to minimize response time to any located threats. These assets could then respond to information gathered by the Quad maritime fusion center or reports from ASEAN nations concerning incursions of their sovereignty. By working together to detect, analyze, track, and respond to illicit maritime activity, the Quad could grow into a functional maritime security enforcement organization that would promote a rules-based order across the Indo-Pacific.

More aggressive proponents of the Quad might argue that the group’s maritime security efforts should not be directed solely at partner-building and maritime domain awareness but rather towards deterring China’s malign actions in the region, such as the militarization of the South China Sea. But while recasting the Quad as a NATO-of-the-Pacific may seem like the arrangement’s logical strategic destiny, proceeding too quickly towards open opposition to China would inevitably break the partnership. The greatest challenge for the Quad will be keeping the strategic priorities of the four nations aligned in the face of inevitable pressure from the PRC.16  All four Quad nations are deeply entangled with China economically and, as democracies, would face the difficult task of messaging the economic consequences resulting from a military standoff. Forcing the Quad too quickly into an anti-China alliance would likely produce political pressures leading to its demise. Additionally, the various interests of ASEAN nations align with both China and the Quad. If the Quad were solely aimed at great-power competition with a rising China, ASEAN would not support it.17 Lacking cooperation with ASEAN, the Quad would have little influence or legitimacy in the region.

The Quad’s maritime security efforts should focus on politically insensitive missions that foster cooperation and interoperability and could later be scaled to meet deteriorating strategic conditions. If China continues its record of coercion and pressure in the region, the governments of Canberra, Delhi, Tokyo, and Washington will all recalibrate their threat perceptions, and may very well see the value in intensifying their military cooperation.18 In the meantime, the Quad can still take some steps to counter Chinese aggression. For example, the recent participation of the Quad nations in Malabar 2021 should be repeated. An annual exercise that brings together the capital assets of all four nations fosters high-end interoperability and builds the combined capabilities of the Quad militaries, thereby improving deterrence in the region by demonstrating an increased capacity for response.19

In conclusion, the Quadrilateral Security Dialogue should focus the combined diplomatic, information, military, and economic power of its four member nations to promote maritime security in the Indo-Pacific by fostering and strengthening rising partners in the region while coordinating to detect, analyze, and interdict illicit maritime activity. The Quad is the premiere U.S. partnership in the region for addressing maritime security, a critical component of the U.S. vision for a free and open Indo-Pacific. The U.S. will not achieve its objectives in the region if Quad efforts towards maritime security are misdirected or ineffective. Diplomacy and economic measures should focus on improving the willingness and capability of ASEAN nations to join the Quad in pursuing their mutual goal of a free and open Indo-Pacific. Quad information and military capabilities should be combined and coordinated to improve maritime domain awareness and provide a response mechanism to address illicit maritime activity. These measures would all be politically viable and would preclude a looming China from driving a wedge between the partners. U.S policy recognizes the Indo-Pacific as “the single most consequential region for America’s future.”21 If the Quadrilateral Security Dialogue embraces its potential for fostering maritime security, America’s future looks much brighter.

Lieutenant Matt Little, USN, is a Naval Flight Officer who most recently served as the P-3 NATOPS Program Manager aboard Patrol Squadron Thirty (VP-30). His views are presented in a personal capacity and do not necessarily reflect the views of any U.S. government department or agency.