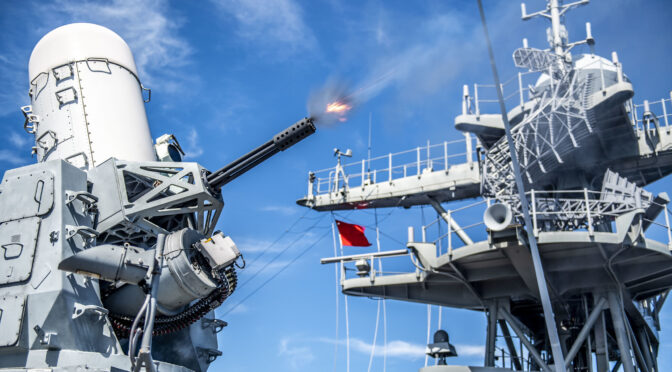 By Chris Rielage and Spike Dearing

Tactical shiphandling is fundamentally different from merchant shiphandling – and navies need to teach both skills. Naval shiphandling curriculums currently tend to focus on safety of navigation and Rules of the Road situations, and for good reason. It is crucial that we are expert at this sort of foundational shiphandling. Warships must be able to navigate safely around merchant traffic, or else risk more maritime disasters like the USS John S. McCain and USS Fitzgerald collisions in 2017, or the HNoMS Helge Ingstad grounding in 2018. But this is only part of what a young Conning Officer or Officer-of-the-Deck must be expert in. Unlike merchant mariners, naval officers also need to be able to handle their ships in both crisis and combat.

First, officers should train for peacetime confrontations. Junior officers being sent to frigates and destroyers should focus on escort duties, shielding carriers, amphibious assault ships, or supply ships from harassing vessels. In particular, this module should teach “shouldering” – the art of placing your ship between the HVU and the harassing unit as a physical barrier, preventing them from collecting valuable intelligence or gaining propaganda victories. Junior officers on their way to larger ships should train in their specific warfare area – how to maneuver an unwieldy aircraft carrier for takeoff and landing, for example.

Second, officers should be trained in combat shiphandling. Every bridge officer should know how to drive to best support their combat systems, both hardkill and softkill. A Conn should know to unmask gun batteries and point defenses without needing instruction, angling their warship for the best firing arcs against a hostile surface ship or incoming missile salvo. Driving with the wind in mind should be second nature, with officers staying mindful of how to blow smoke away from their ship in a fire or drive away from the cloud of radar-reflecting chaff they just launched. Anti-submarine warfare will require bridge officers to make snap maneuvers to dodge incoming torpedoes. Minefields demand their own type of precision shiphandling – and the time for officers to learn how to keep to a safe route through them is not when encountering a minefield in real life.

In these and many other warfare areas, bridge officers with only one to two years of experience will make decisions that can set the ship up for success or failure. Just as every bridge officer should know how to execute a man overboard recovery, instead of waiting on the Captain or TAO to walk them through it, every bridge officer must understand how to fight their ship through tactical maneuver and shiphandling.

As navies invest in more modern and detailed bridge simulators to train Rules of the Road, they should also invest resources to train junior officers on tactical shiphandling. We operate warships, not merchant ships; our measure of effectiveness is not timely deliveries or fuel efficiency, but how effectively we deter or win wars at sea. Our introductory shiphandling courses should reflect that focus.

ENS Chris Rielage serves aboard USS BENFOLD (DDG-65). He graduated from Stanford University in 2021, where he studied China.

ENS Spike Dearing serves aboard USS CHOSIN (DDG-65). He graduated from Michigan State University in 2019 with a degree in Political Theory and Constitutional Democracy.