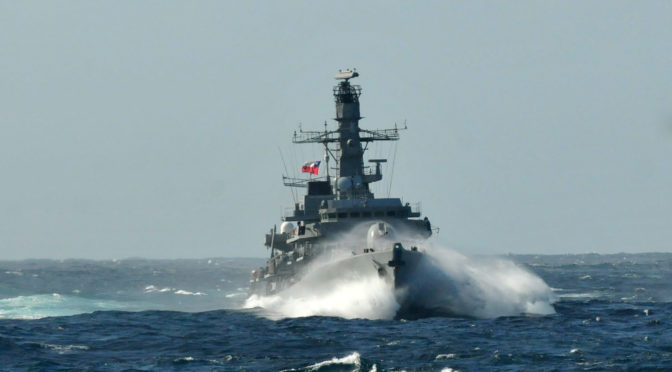 The Chilean Navy is more than just a national warfighting force aimed at conventional deterrence. Earthquakes, volcanic eruptions, fires, and tsunamis are all examples of natural disasters that Chile faces in which the Navy is one of the first to provide support. Along with disaster relief and safeguarding life at sea, countering Illegal, Unreported, and Unregulated (IUU) fishing is one of the most economically important duties of the Chilean Navy. IUU fishing is not only a matter of protecting the economy, but it is also a matter of the sustainability of natural resources in the Chilean Exclusive Economic Zone (EEZ). To tackle IUU, Chile requires creativity, and resourcefulness. The key to accomplishing the task, like for many small- to medium-sized navies, is regional cooperation.

The current Chilean Navy motto — “Vencer o morir,” translated “to vanquish or die” — seems like a heroic and forged-in-war motto, fit for a Navy that has existed for over 200 years. The Chilean Navy saw its roots in the independence wars against the Spanish Empire in the early 18th century and has been ready to stand up to protect the country ever since.

This motto seems to highlight a conventional navy, focused solely on warfighting. However, in the 21st century, small- to medium-sized navies must be able to adapt to survive. Constrained budgets, peaceful geographic neighborhoods, and a need for resources elsewhere in the country — like hospitals, schools, or fighting the current pandemic — are the main threats facing navies like Chile’s today.

Located in the southernmost part of the South American continent, Chile’s reality is complicated. With an Exclusive Economic Zone (EEZ) of 1,063,741 square nautical miles, Chile has the world’s 10th largest sea area. Its primary ocean frontiers are the Pacific and Antarctic Oceans. Its search and rescue area of responsibility is roughly a quarter of the Pacific Ocean (7,726,163 nm2). And with this enormous area of responsibility, there are also myriad unconventional threats . Some of these include IUU fishing, drugs and person trafficking, sea pollution, natural disasters, and protecting the Antarctic environment.

Chile is also a maritime state. More than 95 percent of its exports and 90 percent of its imports come and go through the sea. Chile is a signatory of the Antarctic treaty, which comprises significant responsibilities like safeguarding life at sea in that area, and takes special precautions enforcing the Antarctic system to protect natural resources and the environment.

As a door to the Antarctic, Chile’s position in the southernmost part of the world makes it a natural bridge to launch expeditions (tourist, research, or supplying Antarctic bases) and serves as a logistical platform for search and rescue operations. It is in Punta Arenas where ships from different parts of South America, like Ecuador, Peru, Brazil, and Uruguay, establish their main supply port before starting their Antarctic patrols to resupply their bases.

To tackle the threats and responsibilities described, the White Book of Defense 2017 shifted the tasks assigned to the Navy to a more non-traditional military role, like humanitarian assistance, peacekeeping, and disaster relief. It also states the importance of conserving the ocean and its resources, keeping the Chilean oceanic territory safe and lines of communication open, to interact and cooperate with other countries that share a common interest to protect natural resources, and to increase the governance of ports and secure their logistics.

It should not be surprising that the number of assets required to accomplish all these tasks and keep patrolling the seas is far more than the eight blue-water warships, four offshore patrol vessels (OPVs), and eight Maritime Patrol Aircraft (MPA) the Chilean Navy has today.

The Threat of Distant Waters Fishing ships and IUU Fishing

The importance of fishing is made clear by the enormous fleet built by China. In the last few years, the Overseas Development Institute (ODI) reported that China owns roughly 17,000 distant waters fishing (DWF) boats, becoming the largest fleet in the world (ODI defines DWF as vessels in fishing activities outside a nation’s 200-mile exclusive economic zone). As early as this month, Ecuador announced that more than 300 fishing ships were operating close to its EEZ near Galapagos Island. In 2016, an Argentinian Coast Guard ship sank a Chinese fishing vessel, the Lu Yan Yuan Yu, which was believed to be part of a bigger fleet fishing in Argentinian’s EEZ.

As Claude Berube reminded us on CIMSEC, navies and policymakers must be aware of the numbers. The People’s Republic of China owns 30 percent of fishing fleets and 20 percent of the fish is caught illegally. In Chile, the numbers paint a bleak future. $300 million worth of IUU fish were believed to be caught in the Chilean EEZ during 2017. IUU fishing is not only a threat to the economy, but it is also depleting the oceans. In the long run, it is a major threat to the sustainability of the maritime commons. In this vein, how can the Chilean Navy patrol its enormous ocean area of responsibility with a limited number of assets?

The answer is ingenuity. Unlike other countries that separate the duties of conventional warfighting from those of policing the seas, e.g., the United States or Argentina, Chile has a single agency (the Navy) to patrol and enforce the law at sea, with the Chilean Naval Coast Guard subsumed under the Navy. Whenever naval ships sail or aircraft fly, they patrol Chile’s ocean territory to defend against both military and criminal threats.

The threats of distant waters fishing fleets and tight budgets are combining to push Chile and other like-minded regional navies to cooperate and share the burden. International exercises that emulate real-world challenges are a clear example of international cooperation in South America. Panamax, an exercise that focuses on security and stability in the Panama Canal, comprises 20 nations’ participation, including Chile, Peru, and the U.S. Other exercises include Teamwork South and Unitas. In both, more than five nationalities are represented. RIMPAC is another example of Chilean international presence through exercises. In 2018 Chile commanded the exercise’s maritime component, showing to the rest of the participants that the Chilean Navy is ready to assume more significant and complex challenges.

What Else Can Be Done?

It is difficult to overstate the Chilean Navy’s need for additional resources and better options to accomplish fuller patrolling of its oceans while keeping warfighting capabilities to deter possible adversaries. Crews onboard warships would prefer to exercise more warfighting capabilities and do more live firings, for example, than patrolling the EEZ. However, the Navy has to double its efforts to do more of both with limited assets.

As mentioned earlier, combined patrols seem to be one option to share the burden. In the Antarctic, Chile and Argentina currently run the Antarctic Combined Naval Patrol to safeguard life at sea while rationing assets. But this patrol is a short-term answer. As a more sustainable solution, Chile started building its Offshore Patrol Vessels (OPV) to cover long distances of the EEZ, but even with these platforms much more could be done.

A second option, offered by Claude Berube, could be to hire NGOs like Sea Shepherd and embark government personnel to enforce the law at sea at a relatively small cost (since NGOs use volunteers to man the ships). Another option, given by Peter Roberts from the Royal United Services Institute, could be joint efforts with private companies to increase Maritime Domain Awareness (MDA). For example, nowadays and amid the pandemic, there is a surplus of commercial aircraft that could be used to patrol the EEZ instead of the navy’s P3Cs. Commercial aircraft are not expensive to hire and would be available whenever the navy’s MPA needs to attend to maintenance or warfighting exercises.

Intelligence fusion centers are an excellent third option to help stop IUU. The significance of MDA is invaluable when it comes to sending ships or MPA to investigate possible criminal activities at sea. In the Chilean case, a national task force must be stood up before seeking to expand its reach via neighboring liaison officers. With the data gathered and processed in the fusion center, whether using satellite images or other agencies’ databases, Chile can more efficiently deploy assets to investigate IUU fishing instead of sending MPA without any leads.

Of the three options given, the first two seem cost-effective for small-to-medium navies, but may not be feasible in the eyes of the public opinion. If the Navy outsources patrolling the seas, then why does Chile need a navy in the first place? And with this way of thinking, resources could be allocated to other areas of the national budget. The last option, the IFC, seems a sustainable option that would do well for countering IUU fishing while strengthening bonds with like-minded countries. At first, this international effort could start by sharing only information, and as trust grows, it could go as far as patrolling the EEZ together with combined assets.

IUU fishing is a threat that no coastal country is free from. The numbers of long-range fishing fleets are growing, and natural resources are at risk of being depleted. However, the Chilean Navy must be prepared for the threat coming to its waters. International cooperation is critical to regional navies in South America, but it must start with us. Small- to medium-sized navies must act together to prevail.

Francisco Martinez is a Lieutenant Commander in the Chilean Navy. He holds a Master of International Affairs from Columbia University and is currently stationed at Chile’s Naval Polytechnic Academy. The views expressed are his and not necessarily those of the Chilean Academy or the Chilean Navy.