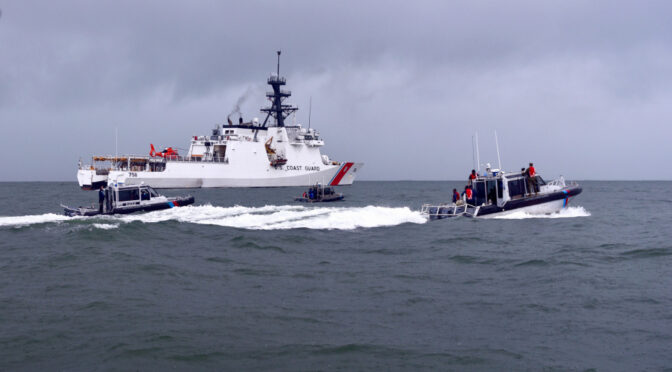 A deployment by the U.S. Coast Guard cutter Stone (WMSL-758) to the South Atlantic, and two coast guard patrol vessels donated by the Korea Coast Guard (KCG) to the Ecuadorian Navy, are some of the latest initiatives by South America’s partners to help regional navies combat illegal, unreported, and unregulated (IUU) fishing. As large, extra-hemispheric fishing fleets continue to actively operate close to South American waters, often crossing into the Exclusive Economic Zones (EEZs) of regional states, navies require additional ships and the physical presence of partner navies to combat these crimes. In the vast waters of the South Pacific and South Atlantic, every ship counts.

The Current Status of the Extra-Regional Fleet

IUU is a constant problem across Latin American waters, both in the South Pacific and South Atlantic. At the time of this writing, the large, extra-hemispheric fishing fleet that operated in international waters close to Ecuador’s EEZ (see the author’s October 16, 2020 commentary “TIAR 21: Maritime security, the TIAR, and IUU fishing in the Western Hemisphere”) has crossed to the South Atlantic. The fleet gained international notoriety when it operated close to the Galapagos Islands, close to Ecuador, in mid-2020.

It has since then voyaged south, passing by Peru and Chile. After monitoring the fleet as it navigated close to its waters, the Chilean Navy reported that some 233 extra-hemispheric fishing vessels, mostly Chinese but also from South Korea and other nations, have crossed the Magellan Strait and Cape Horn to reach the South Atlantic.

The U.S. Coast Guard has deployed its new Legend-class cutter Stone to the South Atlantic to cooperate with the navies of Guyana, Brazil, Uruguay, Argentina, as well as Portugal, to help combat IUU fishing.

Stone departed from the U.S. in late December and has already passed by Guyana, where it carried out maneuvers with the coast guards of Guyana to combat IUU fishing in the area as part of Operation Southern Cross. In engaging with Brazil, the crew of the Stone “conducted engagements and training on communications and law enforcement procedures at the Mocangue Naval Complex in Rio de Janeiro. At sea, Stone worked with the patrol vessel Guaiba and the offshore patrol vessel Amazonas to patrol jointly and practice maneuvering together,” explained the U.S. Coast Guard to the author. Stone docked in Montevideo, Uruguay, in late January.

For Latin American states, it is always helpful when a (modern) vessel from one of its partners travels to the region to provide assistance with surveillance and, if necessary, interception operations of suspicious vessels that may be engaged in activities like IUU fishing, smuggling narcotics, among other maritime crimes. However, vessels like Stone cannot be in the South Atlantic perpetually, and so it is up to regional navies to cooperate with each other and improve their capacities to combat these crimes.

The Importance of Ports in the Fight Against IUU Fishing

A spokesperson from the State Department’s Bureau of Western Hemisphere Affairs explained to the author that the U.S. government “supports and promotes the implementation of the Agreement on Port State Measures (PSMA), a groundbreaking treaty designed to ensure catch from illegal, unreported, and unregulated (IUU) fishing vessels cannot be offloaded in ports and enter the global market.” If implemented in an effective manner, “the PSMA can ​close gaps and weak points so that fishing vessels conducting IUU fishing activities have minimal opportunities to circumvent the rules,” the spokesperson explained. South American countries like Chile, Ecuador, Guyana, Peru, and Uruguay are already parties to the PSMA.

Uruguay is an interesting case study of efforts to combat IUU fishing. The country has very limited naval assets and a vast sea that is plagued by IUU fishing (see the author’s October 12, 2016 commentary for CIMSEC: “The UNCLCS Ruling and the Future of the Uruguayan Navy”). Therefore, in a positive development, “the government of Uruguay, consistent with the Port State Measures Agreement, will require certification from all large fishing ships to demonstrate they have not been engaged in illegal, unreported, and unregulated fishing by requiring Vessel Monitoring System (VMS) location data. Uruguay is also increasing the number of its fishing vessel inspectors by 33 percent,” explained the Bureau to the author. The announcement was made during the 25-27 January visit of Stone to the South American nation.

Moreover, it is worth noting that Washington has an “ongoing multiyear partnership in the Caribbean with the [Food and Agriculture Organization] to support PSMA implementation and other instruments to combat IUU fishing in the Bahamas, Guyana, Jamaica, the Dominican Republic, and Trinidad and Tobago.” Extra-hemispheric fishing fleets (e.g. from China) do not operate in Caribbean waters, but the region still has to combat IUU fishing. Therefore, support from the U.S., particularly via the U.S. Coast Guard, but also from other agencies, is key to protecting Caribbean marine life.

In mid-December, the Ecuadorian Navy presented its two new secondhand patrol boats. The vessels were operated by the Korean Coast Guard from the early 1990s until they were decommissioned in 2019 and 2020. The Haeuri-class vessels have an overall length of 54 meters, a displacement of 300 tons, and were manufactured by Hyundai Heavy Industries.

The two ships were transported from South Korea to Ecuador aboard the general cargo ship Atlantic Harmony; they departed South Korea in mid-November and arrived in mid-December. It is expected that the vessels will be commissioned into the fleet in early 2021.

Prior to their commissioning, maintenance for the new ships will be provided by the Ecuadorian state-run shipyard ASTINAVE, a shipyard spokesperson explained to the author. The shipyard’s operations, like building new vessels and maintaining the rest of the fleet, make ASTINAVE a critical pillar of the country’s defense strategy, the spokesperson explained.

The two ships are a welcome addition to the Ecuadorian fleet for patrol operations. In fact, according to reports, the ships will be utilized to patrol the Galapagos Islands in order to protect these natural reserves from IUU fishing.

In a statement, Commissioner General of the Korea Coast Guard Kim Hong Hee highlighted the importance of this transfer: “previously, the vessels 302 and 303 had successfully completed the missions of protecting the marine resources and safeguarding the maritime sovereignty surrounding the Jeju island, South Korea. They will be once again serving the cause after arriving at the Guayaquil Port of Ecuador.”

Illegal, unreported, and unregulated fishing is a global problem that requires short- and long-term strategies, including greater cooperation between the governments of nations whose waters are constantly suffering from predatory fishing. This is the case of many Latin American nations, as navies are monitoring their EEZs to locate, shadow, and if necessary, intercept extra-hemispheric fishing vessels.

In 2020, a major international fishing fleet of over 300 vessels, many of them from China, made global headlines as they operated close to the cherished Galapagos Islands. However, while global media attention has moved on to other issues, the fleet is still close to South American waters, with some 233 vessels reportedly crossing from the South Pacific to the South Atlantic. The vast number of fishing vessels means that regional navies require more ships, not to mention more maritime patrol aircraft, to maintain a vigilant presence across vast bodies of water.

This is why the deployment of the U.S. Coast Guard cutter Stone, in addition to other support provided by Washington, and the donation by the Korea Coast Guard to the Ecuadorian Navy of two decommissioned patrol vessels, are welcome developments. “I hope that the two patrol vessels will become invaluable assets for Ecuador, which is also affected by the spread of the coronavirus, contributing to protecting the Galapagos islands designated as one of the UNESCO Natural Heritage sites,” commented KCG Commissioner General Kim Hong Hee in November as Atlantic Harmony departed for Latin America.

As extra-hemispheric fishing fleets will continue to operate in a predatory manner close, if not within the EEZs of South American nations, greater cooperation and an active physical presence in these vast waters will remain mandatory.