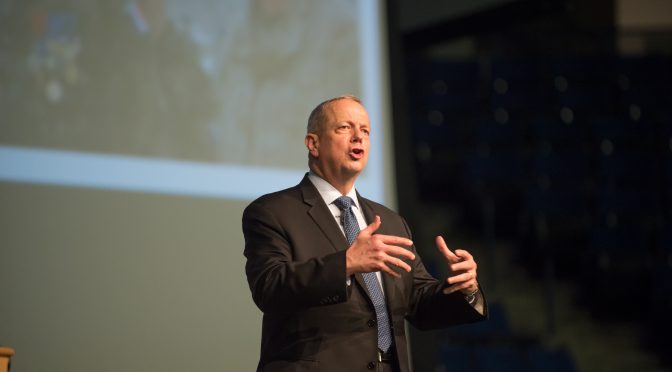 The Forestall Lecture series at the United States Naval Academy affords midshipmen and select guests an opportunity to listen to and learn from a diverse group of speakers, from former Secretary of State Henry Kissinger to former St. Louis Rams coach football coach Dick Vermeil. From the USNA Public Affairs Office:

The Forrestal Lecture Series was established at the Naval Academy in May 1970 in honor of the late James V. Forrestal who, as one of the foremost proponents of seapower of our era, was instrumental in the development of the modern Navy.

The purpose of this lecture series is to enhance the education, awareness, and appreciation of the members of the Brigade of Midshipmen in the social, political and cultural dimensions of the nation and the world. Featured are leading representatives from various walks of life – government, the arts, humor, literature, education, sports, politics, science, and other major fields on the national and international scene.

The Brigade of Midshipmen, some 4,000-plus strong, and delegates from NAFAC, gathered in Alumni Hall Tuesday night to hear from General John Allen, USMC (ret.), former Commander, NATO International Security Assistance Force and U.S. Forces in Afghanistan and former Special Presidential Envoy to the Global Coalition to Counter ISIL.  Gen. Allen currently serves as the Chair of the Security and Strategy Department and as Distinguished Fellow in Residence for Foreign Policy at the Center for 21st Century Security and Intelligence at the Brookings Institution.

Led by a hearty “yut” from what one can only presume was a midshipman who has selected Marine Corps, the brigade and NAFAC welcomed Gen. Allen to the stage. Gen. Allen’s experience in the Near East and East Asia informed his view that it is, indeed, a new era of great power competition – never before, he said, had he seen so many complex issues all at once.

The construct of the current international system is referred to, Gen. Allen told the Brigade, as the “four plus one,” the four being Russia, China, Iran, North Korea, and the plus one representing the extremist jihadi network at large. Gen. Allen cited the annexation of Crimea, Chinese special operators dealing with both the Chinese populace and Uighur population, and the IRGC as destabilizing influences in the modern world. When we talk about these four challenges to the U.S., each has a quality of great power competition associated with it, he said, especially Russia. NAFAC represents an opportunity to take stock of the challenges we face for the road ahead.

“A generation of graduates have known nothing but war – and it may be while before that changes.” ISIS, Gen. Allen said, is merely the latest iteration of the global spread of extremism, and this larger issue is one that worries him the most. In the course of his advisory duties to the president, Gen. Allen expressed that his number one concern is that defeating ISIL physically is not, in fact, an end – they have spread around the world – but the problem of what they stand for is a failure of the human condition in so much of the world today. This dynamic is  due to sea changes in the nature of the world people live in. These changes, Allen explained, may rephrase the question of the international system – the era of great power competition will in fact be shaped by the world we live in and not the other way around.

The world in which midshipmen and delegates will serve, Gen. Allen warned, will be shaped by the forces affecting the world’s populations – reality is changing quickly and dramatically, and will shape politics, economic opportunity, and the security situation in the world. Gen. Allen familiarized attendees with five global mega-trends, paraphrased below:

When we consider the prospect of great power competition, we must consider these mega trends. Gen. Allen emphasized the need to study these forces, and soon, before the very different world of 2050 arrives.  Though the tone of his remarks was foreboding and serious, in a response to a question from an audience member, Gen. Allen addressed what the United States and its allies can do to prepare for and anticipate these coming challenges. He outlined some primary steps: 1) Embrace the changes and make global commitments to change. Examples include long-term and enforceable climate change agreements. 2) Work with states on urban planning, human services, and more to improve conditions in mega-slums, as well as help countries accumulate resources to provide for their populations. Germany’s Marshall Plan 2.0 provides an excellent example. These will require courage, cooperation, coalition, and sharing, he conceded, but these qualities will be necessary for tomorrow’s leaders.

Sally Deboer is serving as the President of CIMSEC for 2016-2017. She can be reached at president@cimsec.org.