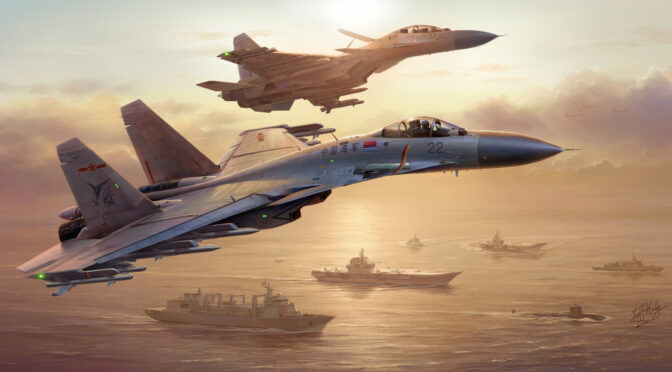 Authors explored future hypotheticals of maritime security and naval conflict through narrative storytelling. Unconventional outcomes and methods were often the result of modern concepts and capabilities that seem familiar. Through these fictional short stories, we may gain insight into how the future of maritime security may evolve, or go awry.

Below are the top finishers and stories featured during CIMSEC’s Fiction Contest Week. We thank the judges, our partners at USNI, and all submitting authors for their excellent contributions.

“DF-26B ballistic missiles split the sky with their hypersonic screams. Guam Killers rained down and Andersen Air Force Base burned. Greasy, black smoke, illuminated by bright flashes of primary detonations, billowed violently into the sky. War was loud, very loud, thought Lieutenant Andrew Cohen as he strapped into the right seat of Bone Daddy, a B-1B Sea Control Bomber. He was first to the aircraft and had hit the alert button at the base of nose gear to start the engines before climbing up to the cockpit.”

“The seafloor was a hundred feet below, and the water was crystal clear. A thousand feet above, the sun shined brightly over the South China Sea, but not a single ray penetrated to where we were, on the seafloor, some forty nautical miles southwest of the Hainan Island coast. We were in international waters but very much inside the Chicoms’ exclusive economic zone. Somewhere below, yet nearby, was a Chicom acoustic array that allowed their intelligence people to identify and track every American submarine in the South China Sea outside the continental break. Our job was to take it out.”

“‘Thank you, Senator,’ Molly said. ‘If you will, allow me to step to the past to help understand the future. I joined the Corps just as Force Design 2030 was reaching maturation, and I saw firsthand what the fight was like under that model. And a lot of Marines died because we still had to ‘fight to get to the fight.’” She let that hang, giving the comment extra time by taking a sip from her glass of water.”

“I remembered the HMS Defender’s ‘innocent passage’ last year; I flew as the aircraft commander. The situation escalated to the point where my SU-24 dropped 4 x OFAB 250kg bombs in its path after repeated warnings from violating Russia’s sovereign territorial waters. However, despite the bombs, she refused to alter course. Since then, the West brazenly increased their FONOPs and ‘innocent passage’ transits.”

“The missiles glided to their targets at supersonic speeds and lanced into the waiting enemy. Explosions washed out Burner’s screen. She peered outside and saw several orbs remained. They bolted in the direction of the cruiser. Burner put her jet on its wingtip and yanked into a body-crushing turn to follow, but they were too fast and sped out of view.”

“Lt. Larsen, taking local command of the swarm, sent a burst transmission, and the formation seamlessly shifted in the dark. ISR and jammers climbed to 5,000 meters. The HARMs moved to the tips on the flanks, and the two heavy weapon Raiders moved to the center. The swarm formed a crescent, with the tips farthest forward, HARMs waiting for the first electronic signs of its prey.”

“Fishbowl in a Barrel,” by Keith Nordquist

“In an SCS, a crew of two could handle an entire New Panamax container ship on their own. From pinpointing a micro-mechanical problem in the turbine assembly to coordinating the additive manufacturing of repair parts at the next port-of-call, the system could do it all. Such impressive technology led Damocles Logistics’ CEO to call the SCS ‘a revolutionary tool for seamless and global logistics.’ The small cadre of SCS mission commanders and mission engineers preferred instead to call their little revolution a scuzz-bucket. Semantics aside, the system made autonomous, large container ship movements possible. Until it didn’t.”

“Aboard the Kolpino, Kastonov and his crew had already moved on to their next mission: proceed west towards Crete, positioning outside of Souda Bay, Greece, and wait for further orders. As the largest NATO naval base in the Mediterranean, he prayed those orders didn’t include engaging hostile American ships. But Russia had just unleashed a surprise attack on a NATO member, and he knew that Article 5 impelled a response. Hopefully, his superiors had crafted a plan that would keep the U.S. and her allies from fulfilling this commitment.”

“Any Clime and Place,” by Karl Flynn

“First Lieutenant Liu, USMC, looked north out to sea toward the Luzon Strait. The sky was turning amber and orange as the sun sank toward the horizon. He knew Taiwan lay beyond the horizon 200 kilometers away. As he often did, he began to wonder what was happening there. As a platoon commander, he was not privy to strategic level actions. Even if he had had internet access, it would have been impossible to discern the truth from news sources, much less social media. Both sides were pushing as much deception as possible. Liu knew he probably wouldn’t find out until well after the war concluded, which, as far as he knew, could last for a very, very long time.”