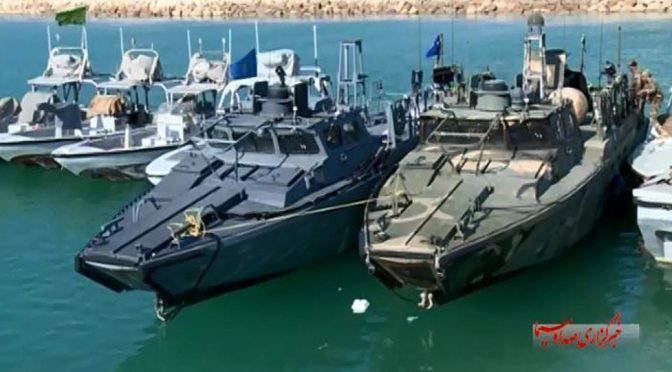 LT Daniel Hancock wrote an article in 2008 titled “The Navy’s Not Serious About Riverine Warfare.” The U.S. Navy had ample opportunity to prove him wrong, right up until 2012 when the Riverine Force was subsumed under the Mobile Expeditionary Security Force (MESF) to create the present-day Coastal Riverine Force (CRF). Four years later, an incident like Farsi Island was the inevitable outcome of this ill-conceived and poorly executed merger. Both Farsi Island and the infamous merger were the manifestations of a culture that has lost its warrior spirit and has adopted an attitude to “man the equipment” rather than “equip the man.”

In the Beginning, There Were Riverines

The Navy re-established a Riverine Force in 2006 to pick up the mission from the Marine Corps’ Small Craft Company, who in turn traced its lineage through the Special Boat Teams back to the Navy PBR squadrons of Vietnam. These predecessor units proved themselves well in combat, with Sailors like BMC James E. Williams and HM2 Juan Rubio exemplifying the warrior spirit of small combat units.

Combat experienced SEALs, SWCCs, EOD techs, and Marines who were intimately familiar with the requirements of close combat guided the SWOs who were tapped to command the 2006 re-establishment. Riverine training requirements were not only relevant, they were tough and they were enforced. Sailors attended a minimum of four months of training (1 month for Riverine Combat Skills plus 3 months of Riverine Craft Crewman, Riverine Security Team, or Riverine Unit Level Leaders) before being assigned to a detachment that stayed together through the training cycle.

That training cycle was intensely busy but it was focused, repeatable across the squadrons, and offered a predictable sequence of development. Months were dedicated to training boat crews to work together on their individual craft, then with a buddy boat, and finally as a multi-boat patrol. Tactics were matured from live fire training at a static range ashore through underway maneuver with blank cartridges, and culminated in numerous live fire underway exercises where crews were engaging targets within 50m of troops being extracted from shore. It was challenging, dangerous, and realistic.

A “moto video” illustrating the live fire culmination exercises required of every Riverine detachment prior to the 2012 merger. (RIVRON THREE)

While the tactics themselves were important, greater value came from the emphasis on teamwork and discipline mandated by operating under these legitimately dangerous conditions of simulated combat. There was no room, nor tolerance, for a coxswain who failed to follow the orders of the boat captain or patrol officer (USN Investigation into Farsi Island Incident, Para IV.H.59). Such strenuous demands developed a sense of professionalism, ownership, and esprit de corps in each Riverine squadron. E-4 and E-5 Sailors who would have been given the barest of responsibility elsewhere in the conventional Navy were accountable for the men, performance, and tactics of their craft. Instead of being a grey-hull navigator in charge of 5 quartermasters, Junior Officers were detachment OICs and AOICs with 30-50 men, $4 million worth of equipment, and enough firepower to make Chesty Puller blush. The professional growth spurred by these responsibilities cannot be understated.

The merger of the Riverine community into the MESF was a fundamental mistake driven by budgetary, rather than operational, considerations. The MESF provided a needed service to the Navy, but did so with a vastly different culture that bore the traditional defensive and risk-averse hallmarks of Surface Warfare, Inc.

First, the decision to disperse riverine capability across multiple commands complicated the manning, training, and logistics requirements later cited as contributing factors to the Farsi Island incident. The realities of budget constraints are unavoidable, but a reduction from three RIVRONs to one squadron would have met similar force reduction goals while maintaining standards and capabilities. The Navy decided against recommendations to consolidate the force around Riverine Squadron THREE in Yorktown, VA where it could have taken advantage of more than $3 million of purpose-built facilities, easy access to the York and James river systems, as well as a wealth of training support spanning from Camp Lejeune, NC to Fort A.P. Hill, VA, and Fort Knox, KY.

Second, a doctrinal comparison of the post-merger CRF Required Operational Capabilities and Projected Operational Environment (ROC&POE) to that of the pre-merger Riverine Force reveals a striking deletion of numerous warfare requirements, including:

These warfare requirements defined the essence of the Riverine community. Their deletion is clearly indicative of a climate averse to combat missions, and an intention to relegate the CRF to the MESF-style defensive missions.

Finally, consider the following merger-era anecdotes illustrating the nature of the MESF community that assumed responsibility for Riverine operations:

The unwritten theme weaved through the post-incident investigation is that Sailors up and down the chain of command failed to take their mission seriously. They failed to train adequately before deployment. They failed to operate professionally in theater. In the face of the enemy, they failed to act.

These systemic failures and the willful neglect of higher echelons are indicative of a culture that sees program management and certification as ends to themselves, rather than the means by which we prepare for combat. This is a culture that raises personnel to be technicians and managers first, leaders second.

Indeed, the officer in this situation “lacked basic mentorship and development from his entire chain of command. Left to his own devices, he emulated the poor leadership traits he witnessed first-hand…” (Para VI.K.6). The Farsi Island incident and the case study of the Riverine-MESF merger must be wake-up calls to the surface community. It is not enough just to man the equipment. We must equip the men and women who lead our fleet.

These leaders must be raised from the beginning of their careers, whether enlisted or officer, and enough responsibility must be delegated down the chain of command to enable this development. A combat mindset requires time and hard work, not budgets. Cultivating that mindset will require generational change, and a fundamental pivot away from our business and technology-centered force to one that embraces the concept of Sailor as Warrior.

But there is hope. There are Officers and Sailors out there who harbor the warrior spirit, ones who can serve as the example for others. For instance, the anonymous “RCB 805 Gunner #2” was the sole member of the captured crews to receive praise for “activating an emergency beacon while kneeling, bound, and guarded at Iranian gunpoint, at risk to her own safety.” Of those involved in this incident, she alone is worthy of the title Riverine.

Featured image: Patrol craft belonging to the USN CRF are held captive by Iran in 2016, one of which displays the blue flag of the Islamic Revolutionary Guards Corps- Navy. (IRIB News Agency via AP)