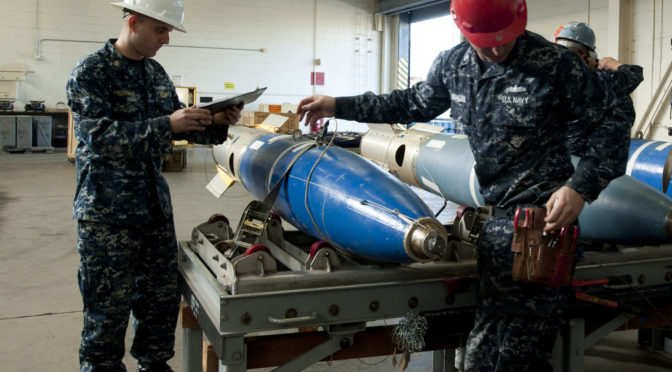 The USMC was recently directed to change its mission focus from countering extremists to great power competition. To this end, numerous studies and guidance have been released, prompting considerable discussion internally and externally to the USMC. One new idea is the Expeditionary Advanced Base Operations (EABO) concept, the purpose of which is employ Marines as an “inside,” low signature, joint naval force conducting sea control and denial operations in littoral and chokepoint regions.

In reviewing the proposed EABO operations, many diﬀerent capabilities are mentioned, but one, naval mines, are given scant attention, and to the point of being almost completely ignored. One of the main prerequisites for success in the littorals will be a diverse weapon suite under decentralized command and control.1 However, the 70-page EABO Handbook only mentions naval mines four times.2 Other guiding documents are similarly unhelpful. Force Design 2030 mentions mines twice,3 while Littoral Operations in a Contested Environment (LOCE) mentions them three times.4 Most of these mentions are defensive in orientation or in reference to developing “battlespace awareness in uncertain environments.”5 Naval mines should instead be seen as an integral oﬀensive tool used by EABO commanders to assist them in securing control of chokepoints and littorals.

Mine Warfare and Naval Operations

Traditionally, naval mines have been thought of as being used in unrestricted warfare as a long-term attrition weapon intended to disrupt sea lines of communication for both warships and freighters. While the objectives of maritime warfare in the littorals remain somewhat similar to warfare in the open ocean, there are key diﬀerences that can be exploited for advantage.6

Mining littorals can be accomplished relatively quickly, such as through aerial employment, as there is no complex deployment cycle required or large support bases that need to be in position. As logistically independent weapons, mines can maintain a persistent presence without requiring sustainment support or additional forces. Minefields are especially resilient in that they can easily be reseeded or reinforced from long-range aerial mining. Mining eﬀorts can also be accomplished by either joint or combined operations. Should U.S. forces not be immediately available, mines can be dropped in conjunction with host nations’ forces in anticipation of the arrival of U.S. forces, leveraging partner nation capabilities in forward areas and in terrain they know best.7

Minefields can be sown with the intent to disrupt enemy operations or fix an enemy’s position long enough to allow other friendly assets to deal with the threat. Mines can also be used to force a hostile force at sea to recalculate its intended transit into a route that offers more opportunity for follow-on engagements from friendly units. Lastly, mines can be used in a more traditional manner to positively block and deter any maritime transit.8

Mines do not promote the vertical escalation of hostilities and are inherently a weapon of deterrence. International treaties require that minefields be noticed to all mariners and demand minefields remain under belligerent control. The exact location of minefields must be recorded so the area can be cleared once hostilities have ended.9 Once in place, mines are passive, low-signature, waiting weapons; the enemy must come to them. It is the enemy who must be the aggressor; the one who deliberately chooses to sail into the mined area and therefore shares responsibility for the outcome. Additionally, advanced mines can be set to respond to specific types of vessels, allowing for more flexible responses and strategies that could discriminate between warships and commercial shipping.

Naval mines are especially cost eﬀective, but this has not always worked to their advantage with respect to the attitude of the U.S. Navy and Marine Corps. Historically, mines have been chosen by weaker nations for this very reason of being cost effective, and the stigma of mines being a weapon of the weak remains today. Setting aside the psychological perception, mines have repeatedly demonstrated disproportionate cost advantages, where these advantages work in two directions. Not only are the costs for procuring and employing mines favorable relative to the targets sunk or damaged, but the expenditures the enemy must make to react to the minefield brings a significant cost of its own in resources and time.10 A mine need not even sink a target to achieve its purpose. Damaging a ship could be a better outcome as a damaged vessel requires that a force spend considerable time and resources withdrawing the stricken vessel safely from the area, something the U.S. Navy has seen in its own experience with mine strikes. Historically, one of the most impressive results of eﬀicient mine warfare occurred in the Dardanelles in 1914, when Turkish forces routed the British Royal Navy with a string of only 20 mines.11

Mines can take the place of other platforms in maintaining sea denial while extending the reach of friendly platforms. Naval mines serve to enhance and extend naval power as a whole.12 Their value also extends deep into second order eﬀects, going far beyond the individual vessels they cripple or sink and into the adversary’s risk calculations and perceptions of access. Often, the psychological impacts of minefields tend to overshadow the actual military threat. Historians regularly comment on how the mere presence of naval mines in contested waters has “most often resulted in extreme political responses or exaggerated psychological reactions,”13 and how the “…psychological impact of the minefield was clear, even if disproportionate to the actual threat.”14

Naval mining operations have strategic value, and are a proven coercive diplomatic tool with an enviable track record. The best example might be the mining of Haiphong Harbor in 1972. The mining campaign helped force a change in the North Vietnamese diplomatic negotiating position concerning the withdrawal of American forces and the timetable for the release of POWs. With the mining of the harbor, “the face-to-face confrontations and the dangers inherent in it could be avoided.”15 Targets and desired effects need not be exclusively military in nature.

The USMC concept of creating an “inside” force to control chokepoint and littoral regions is a solid concept backed with a considerable amount of thought. However, one of the main prerequisites for success will be a suitable and diverse weapon suite that when used effectively, will be able to overcome state or non-state actors bent on controlling the same areas.

But oﬀensive naval mining has received only trivial attention from USMC concepts. It suggests little to no serious consideration has been given to how a mining campaign can prominently feature in contesting chokepoints and littorals.Despite being in a period where budgets are likely to remain flat, if not decline due to severe budgetary pressures, the prominent use of these especially cost-effective weapons has mostly been ignored. For a weapon that has repeatedly demonstrated significant tactical, operational, and even strategic power, this must change.

Mark Howard retired from the Navy as a Commander after 23 years of service. He served as a flight officer in EA-6B Prowlers and is a graduate of the Naval War College with a master’s degree in National Security and Strategic Studies.

4. Department of the Navy, (2017), “Littoral Operations in a Contested Environment”, Washington, DC: Oﬃce of the Chief of Naval Operations and Headquarters, U.S. Marine Corps

9. David Lets, (2014) “Beyond Hague VIII: Other Legal Limits on Naval Mine Warfare”, Stockton Center for the Study of International Law: Vol 90, Pg 446