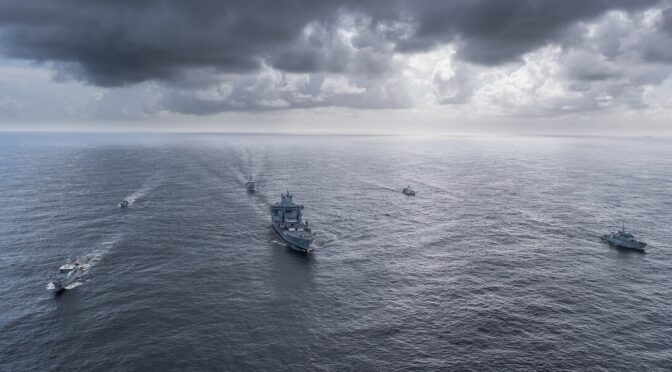 “Whether [working] against COVID, transnational criminal organizations, the predatory actions of China, the malign influence of Russia, or natural disasters, there’s nothing we cannot overcome or achieve through an integrated response with our interagency allies and partners.” – General Laura J. Richardson, Commander, U.S. Southern Command”

Multinational exercise Tradewinds 2022, the Caribbean’s premier military exercise, will be co-hosted by Belize and Mexico and will take place on May 7-21, 2022. This is a great opportunity to promote greater interoperability among the two host nations, the United States, and Canada, as well as partners from the greater Caribbean.

As for Tradewinds 2022, the upcoming exercises are still in the planning stage. The Mexican Naval Secretariat (Secretaria de Marina: SEMAR) has already held a meeting in Quintana Roo with representatives from Tradewinds participants in order to plan the maneuvers – Mexico will organize the naval portion of the maneuvers while Belize will be in charge of the land-based operations. Parallel to Tradewinds, the multinational exercise North American Maritime Security Initiative (NAMSI)  2022, between the navies of Canada, Mexico, and the United States, will also take place.

At the time of this writing, there are no reports about which land, naval, and aerial assets will be deployed by the participating navies in Tradewinds 2022. It can be expected that the co-hosts, Belize and Mexico, will deploy a significant number of units, including patrol vessels, interceptor vessels, and maritime patrol aircraft, not to mention personnel like marines. Approximately 1,500 personnel, civilian and military, will participate, representing 20 nations, in addition to the co-hosts and the United States.

A Great Opportunity for Mexico

This author has covered Tradewinds previously for CIMSEC in “Tradewinds 2018 and the Caribbean’s Maritime Security Challenges”, an article that highlighted the importance of these maneuvers for the region. A retired senior officer from the Dominican Republic’s navy explained to CIMSEC that Tradewinds is “an excellent way to increase interoperability between defense forces and security agencies throughout the Caribbean.” The retired officer added that Tradewinds has a history of being “successful at promoting communication, training against organized crime, [and] carrying out HA/DR operations” between the participating agencies and forces.

For the Mexican navy, Tradewinds 2022 presents a unique opportunity not only to promote interoperability between the other participants, but also to demonstrate the service’s capabilities to organize large multinational exercises. Anecdotally, Tradewinds 2022 will be the first time that Mexico co-hosts these exercises since they commenced in 1984. In an interview with CIMSEC, Christian J. Ehrlich, director of Mexico’s Institute for Strategy and Development Research and the founding director of the Riskop consultancy company, explained that Tradewinds is an ideal opportunity for Mexico, particularly the navy, to “continue the evolution of its doctrine. By this I mean expanding the service’s operations from mostly coastal activities to achieving greater capabilities.” For example, Tradewinds will help Mexico “evolve and evaluate its current command and control doctrines regarding this type of operation,” Ehrlich noted.

NAMSI has similarly become a key initiative that is helpful to the three participating navies. In his written testimony for a 2012 hearing at the House Committee on Homeland Security Subcommittee on Border and Maritime Security, then-U.S. Coast Guard Deputy for Operations Policy and Capabilities Rear Admiral William Lee described NAMSI in the following way:

“[The exercise] provides an operational relationship between SEMAR, NORTHCOM, the Government of Canada, and the Coast Guard and coordinates standard procedures for communications, training, procedures, and operations. Since the inception of NAMSI in December 2008, there have been 24 joint cases yielding 62,816 pounds of narcotics seizures.”

While it remains unconfirmed whether this is the first time that NAMSI and Tradewinds are occuring simultaneously, in any case, this presents a great opportunity for Caribbean defense forces. As Ehrlich explained, while these two exercises are different, the themes are generally similar, as their aim is to prepare personnel to face similar threats. “The other participants of Tradewinds can observe the NAMSI maneuvers and learn about the agreements [between Canada, Mexico, and the U.S.]. This could lead to greater interoperability between Caribbean states following the NAMSI model,” he added.

Finally, Tradewinds 2022 will ideally lead to greater interoperability and connections between the Mexican navy with fellow navies and coast guards from the English-speaking Caribbean. While the Mexican navy has sent platforms to previous iterations of Tradewinds, and diplomatic relations are overall cordial, there is a lack of close navy-to-navy relations. Hopefully, Tradewinds 2022 can be the stepping stone for change and stronger naval relations between these services. “The objective of Tradewinds is to increase ties between the English-speaking Caribbean with Canada, Mexico and the United States. [The latter three countries] already have various defense protocols and agreements to promote interoperability,” Ehrlich noted, adding that Tradewinds 2022 could lead to a common doctrine among the participants.

What makes Tradewinds 2022 particularly important for SOUTHCOM is that these will be the first major exercises that the Command will help organize under the leadership of Army General Laura Richardson, its new commander. General Richardson has already met with Central American and Caribbean defense commanders; during the 2022 Central American Security Conference, held in early February in Belize, the general noted that she looked forward to “discuss[ing] disaster relief and regional security challenges, and strategiz[ing] about how we can leverage annual exercises like Tradewinds and CENTAM Guardian to show just how Integrated and Intertwined we are.” Therefore, Tradewinds will be a great opportunity for the new SOUTHCOM commander to examine how her Command and U.S. partners in the Caribbean work together in the field.

The waters of the Caribbean are far from peaceful—well-known security threats include combating drug trafficking, as well as piracy and human trafficking. There are also environmental crimes like illegal, unreported, and unregulated (IUU) fishing as well as efforts to improve joint responses to natural disasters, which are becoming deadlier and more destructive due to climate change. Hopefully, Tradewinds 2022 will continue to increase interoperability and strong ties among the Caribbean nations, both island states as well as the mainland, to prepare the region to better face common threats together.

Wilder Alejandro Sánchez is an analyst who focuses on international security and geopolitics. The views expressed in this article belong to the author alone and do not necessarily reflect those of any institutions with which the author is associated. Follow him on Twitter: @W_Alex_Sanchez.