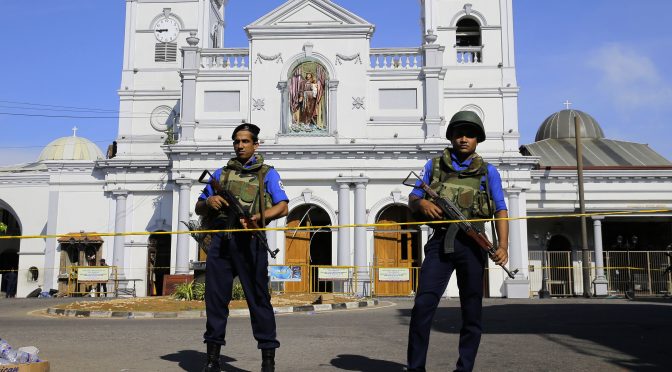 Dust is settling in Sri Lanka after one of the most devastating and heinous terrorist attacks against Christians and foreign visitors (civilians) on 21st April 2019. It was supposed to be a day of glory and celebrations for Christians the world over. However, it turned out to be a day of horror and repugnance for Sri Lankans. The security forces and the police are doing a commendable job in taking follow-up action and are in the process of arresting large numbers of radicalized persons, criminals, and recovering large quantities of illegal weapons, explosives, detonators, vehicles, communications equipment, and forged passports and National Identity Cards. There were even several follow-on gun battles and explosions.

There is now country-wide fear and psychosis with many people staying at home unless it is really essential for them to go out. Schools and other educational institutions have been closed and all types of fanfare, musical shows, and festivities have been stopped. The print and electronic media is trying their best to keep the population informed of the developing situation as well as advising on precautions to be taken. Religious leaders of all denominations led by His Eminence Malcom Cardinal Ranjith are sending message after message appealing to their followers to practice tolerance and requesting them not to take the law into their own hands, which has prevented the escalation of violence against the innocent Muslim populations.

The United Nations Secretary-General’s High-level Panel on Threats, Challenges, and Change described terrorism as any action that is “intended to cause death or serious bodily harm to civilians or noncombatants, when the purpose of such an act, by its nature or context, is to intimidate a population, or to compel a Government or an international organization to do or to abstain from doing any act.”

In short, terrorism could be described as basically indiscriminate violence against non-combatants to achieve political, religious, or some other objective. While terrorism is a tactic that cannot be entirely eradicated, steps can be taken to disrupt, dismantle, and ultimately defeat organizations that use terrorism. Counterterrorism is defined in the U.S. Army Field Manual as “Operations that include the offensive measures taken to prevent, deter, preempt, and respond to terrorism.” This definition is more concrete but has its strengths and weaknesses.  First, it correctly states that counterterrorism is an all-inclusive doctrine including prevention, deterrence, preemption, and responses, which would require bringing to bear all aspects of a nation’s power both domestically and internationally.  Second, this definition includes everything but essentially differentiates nothing, which is a problem.

Counterterrorism is a difficult concept to define, especially in democracies.  There is no universally applicable counter-terrorism policy since every conflict involving terrorism has its own unique characteristics. Democracies must make respect for civil liberties and the rule of law, a staple in their counterterrorism strategies. While this ambition for liberal democracies is admirable and complies with championed democratic principles, it does not always amount to a counterterrorism strategy – these should be simply highly valued principles meant to guide counterterrorism. Counterterrorism (also called anti-terrorism) incorporates the practice, military tactics, techniques, and strategy that government, military, police and other organizations use to combat or prevent terrorism. It must be remembered that human rights and individual freedoms are good, but the right to live is most important. The Easter Bombings took away the right to live from nearly 250 innocent civilians.

The Easter Bombings have created a major problem in Sri Lanka. A person who uses unlawful violence and intimidation, especially against civilians, in the pursuit of political aims is a terrorist. A terrorist was originally seen as a person from an underprivileged community, less educated, less economically sound, lower social status, victimized, and motivated for a cause. However, in the 21st bombing the terrorists are reported to be highly educated, both locally and in abroad, from rich families, economically sound, exposed to the world and believers of a religious sect, and highly motivated for a cause even against the mainstream religion of their culture. This showcases a significant degree of indoctrination, facilitated either locally or by foreign influence.

Lessons to be Learned from the Easter Bombings

The Easter Bombings have clearly displayed the vulnerability of Sri Lanka, its community, and installations to a terrorist attack. It reveals that almost any target could have been selected by a terrorist and been attacked. These incidents also prove that national security has been quite at the bottom of the country’s agenda despite the fact the country experienced a protracted conflict against a very formidable terrorist organization for nearly three decades. In simple words, there was a lack of security culture in the country. We have not been able to take effective, timely counter-action to prevent, deter, or detect these perpetrators despite credible intelligence warnings. Insufficient attention was given to intelligence warnings due to a lack of security culture.

It must be remembered that intelligence is not mere information. Many strands of information need to be gathered, collated, and evaluated in order to derive effective actionable intelligence. Thereafter it must be disseminated to the necessary agencies and personnel. It must be remembered that intelligence means different things to different agencies based on their own expertise and the domain they focus on. The multiple intelligence organizations in the country need to be integrated, a practice we developed and effectively used toward the end of the civil war which devastated the country. Like a jigsaw puzzle, the full picture only comes together when the pieces are effectively combined. However, we need to look beyond the picture and link, evaluate, and identify trends, both locally and internationally, which would enable us to predict with certain accuracy and make intelligence actionable. The sharing of intelligence, taking prompt action, and then follow-up action are all key to successful counter terrorism operations.

Even then, unless there is a positive national security culture, this actionable intelligence will not find its due place in the hands of decision-makers. Sri Lanka is a small island state geo-strategically located at arguably the most critical location in the Indian Ocean, among competing spheres of influence of major powers. Furthermore, the country has come out of a prolonged conflict. Therefore, all our actions, our foreign relations, the development of infrastructure, and the development of economy must give due consideration and priority to national security.

Unfortunately, Sri Lanka, which prided itself on being the only country in the contemporary world to completely defeat terrorism on its soil, is bleeding again. It is believed that with a proper national security culture the Easter carnage could have been prevented or the impact minimized. Unfortunately, it was not the case. Terrorists achieved what they wanted – to create fear and psychosis by mayhem and death of large numbers of innocent civilians, and earning worldwide media coverage. This dastardly act will not quickly fade given how the suffering of the people has been immense.

But we need to move on. We need to keep national security as our upper-most priority and create a culture of security. Countering terrorist activities cannot be done by government forces alone. It has to be a comprehensive effort and a whole-of-nation approach, similar to what we had toward the end of the separatist conflict. Not only did Sri Lanka finally overcome the most ruthless terrorist organization in May 2009, but we were not caught in the conflict trap as no major terrorist event took place for nearly ten years until the Easter Bombings. We had the best models of rehabilitation, resettlement, and reconstruction during the post-conflict period.

We must rise above the radicalized elements and evil forces that are waiting to destroy us. We are in desolation but not in despair. There is hope in humanity. Together we will survive but divided we perish. The choice is ours, but we owe it to the country and future generations.

Admiral (Dr.) Jayanath Colombage is a former chief of the Sri Lanka Navy who retired after an active service of 37 years as a four-star admiral. He is a highly decorated officer for gallantry and distinguished service. He is a graduate of Defence Services Staff College in India and Royal College of Defence Studies, UK. He holds a PhD from General Sir John Kotelawala Defence University. He also holds MSc on defence and strategic studies from Madras university and MA on International Studies from Kings college, London. He is a visiting lecturer at the University of Colombo, Defence Services Command and Staff college (Sri Lanka), Kotelawala Defence University, Bandaranaike Center for International Studies and Bandaranaike International Diplomatic Training Institute. He was the former Chairman of Sri Lanka Shipping Corporation and an adviser to the President of Sri Lanka on maritime affairs. He is a Fellow of Nautical Institute, London UK. Admiral Colombage is currently the Director of the Centre for Indo- Lanka Initiatives of the Pathfinder Foundation. He is also a member of the Advisory council of the Institute of National Security Studies Sri Lanka. He is also a Guest Professor at Sichuan University in China.

Featured Image: Sri Lankan soldiers stand guard in front of the St. Anthony’s Shrine a day after the series of blasts, in Colombo, Sri Lanka, on April 22. (Eranga Jayawardena/AP)