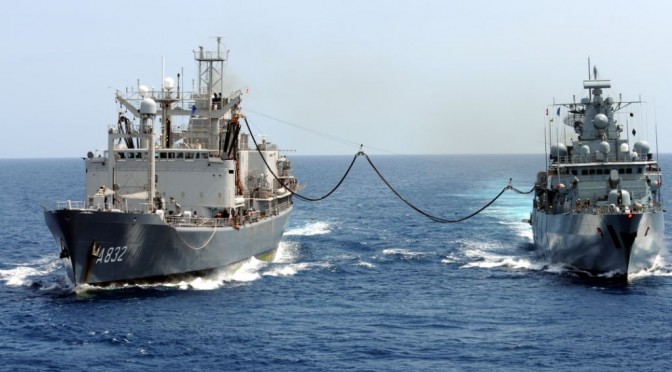 The following is a submission by guest author Chris O’Connor for CIMSEC’s Distributed Lethality week.

Distributed lethality is a concept that harkens back to the glory days of the US Navy in the age of sail: small groups of ships with operational autonomy fighting the enemy with their organic firepower and capabilities. Operational autonomy was the default state for ships  until Marconi’s radio set- the lack of instantaneous communication meant that commanders had to make decisions by themselves. Concerning distributed lethality, the lack of communications is imposed upon our ships by enemy communications denial in an A2/AD environment. The parallel does not work in the logistics domain as well- warships then had to fend for themselves logistically, while today, we will have to force a new mode of supply on our ships in order for them to operate independently.

There are some lessons we can learn from how we supported our ships in the past, but there is a big difference in the sustainment modality of the 64-gun USS Bonhomme Richard of Revolutionary War legend and the modern namesake of her captain USS John Paul Jones (DDG-53). 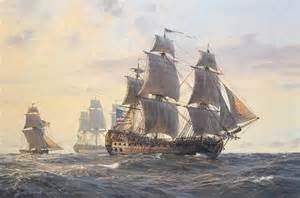 replenishment opportunities were few and far between. Most of our surface combatants are replenished from MSC ships with such frequency that fresh fruits and vegetables are a part of the staple on Carrier Strike Group (CSG) deployers and hard pack ice cream is not uncommon. Life on-board the hunter killer Surface Action Groups (SAGs) will be less comfortable, but it does not have to regress to the days of hard tack and picked herring. Instead, austere life on a modern surface ship life will be closer to that of how submariners live on nuclear attack subs. More canned and from scratch food could be served and valuable storeroom space that is now used for ship’s store items and soda vending could further extend the endurance of a vessel as food storage. Our refrigeration units could be converted to only carry frozen items, yet another adaptation for better food autonomy that sacrifices the comfort of salads and perishable fruit for several more days between replenishment hits.

Ships in the age of sail had carpenters in their crew and bosun’s mates that could repair a large part of what we would call ‘Hull, Mechanical, and Electrical’ systems on today’s warships, using materials that could be collected from almost any port- or from captured enemy ships, for that matter. Shot out rudders, rigging, sails- the prime movers of a ship of the day- could be at least “jury rigged” with organic capabilities on-board. The bridge that modern warships need to come even close to this capability is a suite of additive manufacturing systems that can build replacement parts of many shapes and materials, to include systems that can repair parts by building directly on their surfaces with an additive manufacturing (AM) system. Sailors will need to be able to repair their own systems with these new technologies, introducing an organizational level repair suite that can fix far more than the currently installed machine shops. In the near term, AM will not be the solution to all of our shipboard repair problems, especially on space constrained surface combatants. The state of the technology means that our ships will still depend on logistics assets for at least some of their repair parts, which will tend towards the complex in design, and will be most likely vital for the operation of our critical systems.

The delivery of high priority parts to ships at sea necessitates a solution that departs from our historical parallels. If we are to provide logistical supports to distributed assets in a emission-restricted or denied environment, a family of autonomous replenishment assets needs to be developed. In the “distributed lethality” environment, large, exquisite MH-60 helicopters should not be used to deliver small packages of critical parts (a situation that the author has personally experienced a number of times). These multi-mission aircraft are better utilized prosecuting targets, providing ISR, and acting as communications relays. The crews of the helicopters should also not be put to risk delivering parts where detection in contested airspace would have a fatal outcome. Vertical take-off and landing UAVs (VTUAV) lend themselves perfectly to this mission, but there is not currently a platform in the Navy that is suited for this mission.

The Navy needs to fill this capability gap by changing how VTUAVs are operated from ships and advancing existing technologies to a level that allows for a mature autonomous capability. We have to

operate these systems without flight following; controlled assets are no use to us an environment where communications are not guaranteed. To enable this, such a robotic replenishment asset would have to have “sense and avoid” systems so that they do not collide with other aircraft, ships, or oil platforms as they fly point to point from ship to ship or ship to shore. In addition, these aircraft will have systems that use a combination of EO/IR, LIDAR, and INS to first get in the vicinity of the receiving ship and then land on it without any outside input or control. This is an important difference from our current CONOPs, for there is no UAV that can land on any ship in our inventory by itself; they all require UCARs (UAV Common Automatic Recovery System), SPN radars, or man-in-the-loop input. To be truly useful, logistics missions should be able to be flown to and from any surface ship, as they are with manned helicopters. The all of the above technologies needed for an autonomous logistics UAV currently exist but have not been combined into one dedicated platform. When proven, a family of systems ranging from Fire Scout to optionally manned H-60s to hybrid airships could be employed, stretching a flexible sustainment chain that can leapfrog from asset to asset out to our hunter killer SAGs.

Austerity, additive manufacturing, and robotic replenishment can only take sustainment endurance so far without dealing with the five hundred pound gorilla of energy supply. At sea fuel replenishment will be much rarer if combatant ships operate in environments that make MSC ship operations difficult due to distance or enemy threats. In addition, these oilers might be occupied in other future missions as missile shooters with bolt-on launchers or adaptive force package elements. To start, a greater tolerance for lower levels of shipboard fuel bunkerage needs to be embraced operationally. Fuel cells and batteries need to be added to existing platforms to share the electrical generation burden from the gas turbine generators, so more fuel can be conserved for ship propulsion. The end solution to this problem could be much more radical and needs to be examined in great depth. Unmanned fuel tugs in concert with underwater fuel stations could service our ships, but the full implications of using such systems are far from certain.

“Distributed Lethality” will prove a sea change to how naval forces employ surface assets with significant implications for tactics, command and control methods, and platform employment means. In order for it all to work, we need to be as innovative with our sustainment methods we are in all the other enabling warfare disciplines. The sooner we get started, the more seamless the final package will be.

Chris O’Connor is a supply corps officer in the United States Navy and is a member of the Chief of Naval Operations Rapid Innovation Cell. The views expressed here are his own and do not represent those of the United States Department of Defense.