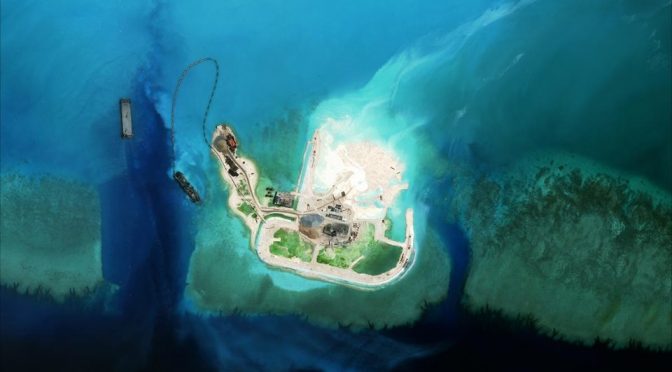 This article is an adaptation of an academic publication by Bill Hayton published in ‘Modern China’ as ‘The Modern Origins of China’s South China Sea Claims: Maps, Misunderstandings, and the Maritime Geobody.’ A version of this article was published in Vietnamese by BBC and may be read here.

The South China Sea is a dangerous place because of the layering of several different struggles on top of one another. There are struggles over the future of the world order, struggles between regional powers, and struggles over maritime resources. But underlying them all is a knot of territorial disputes over a few hundred tiny rocks and reefs. Given how much attention the disputes currently attract, it is surprising how little attention has been paid to their origins. A few flawed accounts were written several decades ago but more evidence has come to light since then and it is time to revise the conventional wisdom. Governments like to pretend that their claims to the hundreds of rocks and reefs in the sea are historical and logical. However, after several years of studying them, it is clear that this is far from true.

The focus of most of the current trouble in the South China Sea is the Spratly Islands and a few underwater features that are closer to the coasts of Vietnam and Borneo. These are a very long way from the Chinese mainland and China has never made clear the precise origins of its claim to them. My own research – just published in the academic journal ‘Modern China’ – leads me to conclude that the Chinese claim only emerged because of some poor translation and bad map-making during the 1930s. My conclusion is that China’s claim to the Spratly Islands is actually a mistake.

The story of China’s claims in the South China Sea began in 1907 with the discovery of a Japanese merchant digging up petrified bird droppings on the island of Pratas (between Hong Kong and Taiwan). Nishizawa Yoshiji was one of many Japanese entrepreneurs mining guano for fertilizer all over the Pacific. However, there were rumors that Japan was also planning to build a naval base on Pratas and that concerned the United States and its newly-acquired colony in the Philippines. The American government informed officials in Beijing in late 1907 but it took well over a year before a Chinese ship was sent to investigate. In March 1909, Chinese officials confirmed Nishizawa’s presence. That triggered large protests in southern China and a boycott of Japanese products. The Japanese government agreed to negotiations, which eventually led to Japan recognizing Chinese sovereignty over Pratas.

However, at the same time, the southern Chinese authorities learned about the existence of the Paracel Islands, apparently for the first time, and became concerned that Japan might try to annex them. This led to an expedition in May and June 1909 during which China formally claimed sovereignty over the Paracels for the first time. The Chinese ships spent three days among the islands firing cannon and planting flags before returning home. However, it was immediately clear to the expedition leaders that the Paracels were not going to deliver any riches. Newspaper accounts mention a plan to turn them into a penal colony but within weeks the authorities had completely lost interest in the islands. They did not return until the 1920s.

The next major incident in the South China Sea created complete confusion – a muddle that infected the earlier academic accounts of the Chinese claim and still affects historical discussions to this day. In December 1931 France – the colonial power in Indochina – claimed sovereignty over the Paracel Islands and, nine months later, China protested. In July 1933, while the two governments were still arguing over the Paracels, France also announced the annexation of six of the Spratly Islands. This led to great confusion in China. It is clear from official documents and newspapers of the time that the Chinese authorities did not know the difference between the Spratlys and the Paracels. They thought that the islands that France had just annexed were the same that China had claimed in 1909. It took several weeks for the confusion to be cleared up. During the discussions the Chinese Navy even sent a telegram to the Chinese Foreign Ministry asserting that the Spratly Islands did not exist! The situation was only cleared up with the help of maps provided by American officials in Manila. In the end, the Chinese government decided that it could not prove a claim to the Spratlys and so did not protest against France’s actions.

However, this confusion led the Chinese government to instruct its ‘Land and Water Maps Review Committee’ to investigate the situation. Among the committee’s other tasks, it inspected and translated maps to show which islands were the Paracels and which were the Spratlys. It also gave Chinese names to them – but these were simply translations or transliterations. North Danger Reef became Beixian 北險礁 (a translation from English). Spratly Island became Si-ba-la-tuo 斯巴拉脫島 (a transliteration of the name of the English sea captain, Richard Spratly), and Luconia Shoals was transliterated as Lu-kang-ni-a 盧康尼亞滩. My own research suggests that the list of names the committee translated was probably taken from the China Sea Directory, published in 1906 by the United Kingdom Hydrographic Office.

However, in the process, the committee made some mistakes. It seems to have been particularly confused by the English nautical terms “bank” and “shoal.” Both mean an area of shallow sea—the former describes a raised area of seabed, the latter is a nautical expression derived from Old English meaning “shallow.” However, the committee chose to translate both as tan 灘, which has the ambiguous translation of “sandbank,” a feature that might be above or below water.

The committee gave one particular underwater feature, James Shoal, the Chinese name Zengmu tan 曾姆滩, and another, Vanguard Bank, the name Qianwei tan 前衛滩. Zengmu is the transliteration of “James,” Qianwei is a translation of “vanguard,” and tan is the translation of “bank” and “shoal.” This translation choice has had major consequences, as we shall see. Why it decided to make a particular point of selecting these two underwater features for its list is also something of a mystery.

My hypothesis is that, since they did not undertake any of their own hydrographic surveys, committee members were completely guided by the maps that they were copying. One map that would have been part of any standard collection at the time was one produced by Edward Stanford Ltd. of London. The company’s 1918 map entitled Asiatic Archipelago gives particular prominence to both James Shoal and Vanguard Bank and to most of the other features listed by the committee (see Figure 1). I suspect that this map also guided the committee’s choices about which features to give Chinese names to.

In 1936, Bai Meichu 白眉初, a founder of the China Geography Society, used the committee’s information to publish his New Atlas of China’s Construction 中華建設新圖. Taking his cue from the committee’s mistranslation, he made a massive mistake. He drew the underwater James Shoal and Vanguard Bank as islands. He then added a U-shaped line around the South China Sea as far south as James Shoal and as far southwest as Vanguard Bank (see Figure 2). Bai’s meaning was clear—the line marked his “scientific” understanding of China’s rightful territory. Because of his mistakes the James Shoal and Vanguard Bank would later became the limits of China’s claim in the South China Sea. This was the very first time that such a line had been drawn on a Chinese map. It was not a state document though; it was the work of a private individual.

Bai added some other innovations, too. He also drew the underwater features of the Macclesfield Bank (in the center of the South China Sea) as islands. This may be the reason why, to this day, the Chinese state talks about four “archipelagos” in the sea, even though one of them demonstrably does not exist!

The Republic of China still did not claim the Spratlys, however. As late as 1943, the ROC Ministry of Information published its China Handbook 1937–43, a comprehensive guide to the country’s geography, history, politics, and economics. On its opening page it stated that “the territory of the Republic of China extends from [the Sajan Mountains in the north] . . . to Triton Island of the Paracel Group.”

This view of China’s maritime territory would change dramatically over the following three years. It seems likely that this change was facilitated, perhaps even orchestrated, by two of Bai Meichu’s students. In 1927, while he was chair of the Department of History and Geography at Beijing Normal University, Bai taught Fu Jiaojin 傅角今 and Zheng Ziyue 鄭資約. After the Second World War, they were hired by the Chinese Ministry of Interior to advise the government on its territorial boundaries. They drew the government maps in 1946 and 1947 that led to the official Chinese claim in the South China Sea. Fu and Zhang used Bai’s map and his ‘U-shaped line’ to guide them. Thus China would claim the underwater features of the James Shoal and Vanguard Bank as its territory. This makes no sense at all – except if you understand this strange piece of history. The Chinese claim is the result of a series of mistakes.

In October 1947 the ROC Ministry of the Interior renamed the islands within its new claim. Most of the 1935 translations and transliterations were replaced by new, grand-sounding and more “Chinese” titles. For example, the Chinese name for Spratly Island was changed from Si-ba-la-tuo to Nanwei 南威島 (Noble South) and Scarborough Shoal was changed from Si-ka-ba-luo 斯卡巴洛礁 (the transliteration) to Minzhu jiao 民主礁 (Democracy Reef). Vanguard Bank’s Chinese name was changed from Qianwei tan to Wan’an tan 萬安灘 (Ten Thousand Peace Bank). This process was repeated across the archipelagos. The ministry seems to have recognized its earlier problem with translating “shoal” at this time because it coined the word ansha 暗沙, literally “hidden sand,” as a neologism to use instead of tan 灘 in the names of several features, including James Shoal, which was renamed Zengmu ansha.

It was not until 1948, therefore, that the Chinese state formally extended its territorial claim in the South China Sea to the Spratly Islands, as far south as James Shoal. Clearly something had changed in the years between July 1933, when the Republic of China government was unaware that the Spratly Islands existed, and April 1947, when it could “reaffirm” that the southernmost point of its territory was James Shoal.

Although the Chinese government likes to say that it has an ancient and historical claim to the reefs and rocks in the South China Sea, a detailed examination of evidence shows that it actually emerged in the first half of the twentieth century. It also changed during a 40-year period 1907-1947. The whole process was filled with confusion and misunderstanding. A few mistakes by a small number of poorly-informed Chinese officials and academics back in the 1930s have created lingering confusion that still poisons the politics of Southeast Asia to this day.

Bill Hayton is an Associate Fellow with the Asia-Pacific Programme at Chatham House, the Royal Institute of International Affairs, London. He is the author of The South China Sea: The Struggle for Power in Asia and Vietnam:Rising Dragon.